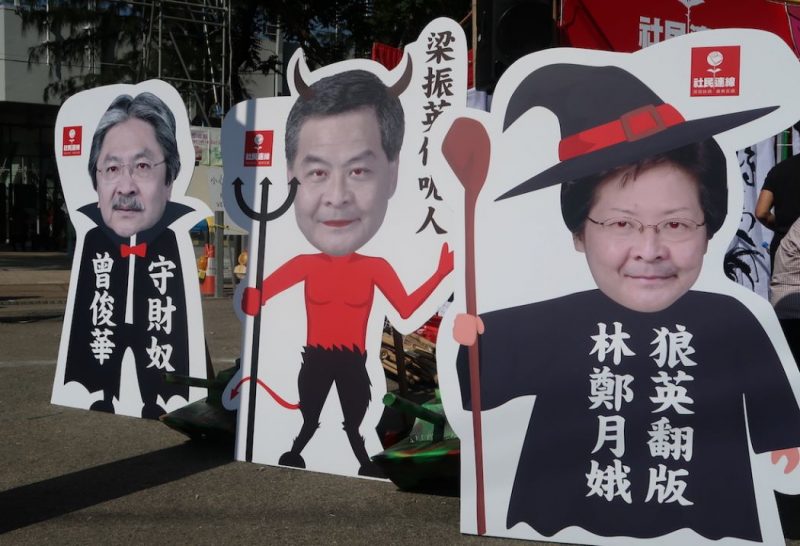 The election of Hong Kong's top leader, known as the chief executive, is to take place on March 26, and the nomination period will run from February 14 to March 1.

Ordinary people in Hong Kong, which is a special administrative region of China, are excluded from nominating and electing their leaders. Instead, potential candidates have to be endorsed by at least 150 members of a 1,200-member election committee composed of representatives of different sectors. The 1,200 members will then vote on March 26 and decide who is going to rule Hong Kong for the next five years.

One of the big divisions in the election committee is between Beijing loyalists and those who put other interests first. That could come into play in a big way in the upcoming election. The pan-democracy camp has 325 election committee seats. Furthermore, 285 members representing local business who had voted for Henry Tang in 2012 have expressed discontent [2]over current Chief Executive CY Leung's unpopular ruling style, which some argue is partly the result of political tactics imported from the Chinese Communist Party.

This means it is quite likely that Beijing loyalists control less than 600 votes in the upcoming election. While current Chief Executive CY Leung has declared he would not run for the re-election, some from the business sector have returned to the loyalist camp. However, if a portion of business sector and the pan-democrats decide not to give their votes to the candidate blessed by the Liaison Office, the winner would not have a popular mandate even within a small circle.

In fact, Beijing’s decision to stop backing CY Leung’s bid for re-election has sent a signal that it expects the next chief executive to be more popular. Beijing’s attitude has also been reflected in the four criteria [3] put forward by Wang Guangya, China's Hong Kong and Macau Affairs Office director, in early January: the future chief executive should 1. love China and love Hong Kong; 2. be trusted by Beijing; 3. be capable of governing; and 4. be supported by the Hong Kong people.

Currently, there are four potential candidates who have started lobbying members of the election committee to endorse their candidacy by giving them their nomination. They are Regina Ip Lau Suk-yee, a lawmaker and former security secretary; Carrie Lam, ex-chief secretary and a key ally of CY Leung; Woo Kwok-hing, a retired judge; and John Tsang, ex-finance chief.

Among the four, Beijing’s Liaison Office in Hong Kong told [4] its loyalists on the election committee that Carrie Lam has been handpicked by the Central Political Bureau of the Chinese Communist Party to replace CY Leung as the next chief executive. That has led many Hong Kongers to believe that if Carrie Lam becomes the chief executive, she would be a puppet of Beijing and would not defend the city’s autonomy.

John Tsang, who is supported by the local business sector and professional groups, is generally viewed as a “lesser evil” candidate. Such a view is reflected in his successful crowdfunding campaign [5], and some election committee members from the pan-democracy camp have been considering nominating him.

Yet, whether Tsang is really a “lesser evil” and how exactly he is less evil than other candidates has been a subject of heated debates on social media.

Tsang has stated that future political reform should fall in line with Beijing’s “831 decision” — a framework on elections handed down by the National People’s Congress standing committee on August 31, 2014. Hong Kong's constitution, known as the Basic Law, states that the chief executive should be elected by the Hong Kong people “upon nomination by a broadly representative nominating committee in accordance with democratic procedures,” and the 2017 chief executive election was meant to be the first in which Hong Kongers got to vote.

The “831 decision,” however, required that a 1,200-member committee decide the candidates first and limited the number of candidates to two or three, prompting thousands of people to occupy Hong Kong's downtown for months demanding that citizens have a say in the nomination in what was dubbed the “Umbrella Revolution”. Hong Kong's legislature eventually rejected the political reform package for 2017, leaving the current election-by-committee system in place.

Tsang has also said he would kickstart the Basic Law Article 23 legislation as soon as possible once elected. Article 23 demands that Hong Kong to enact a set of laws to prohibit acts of treason, secession, sedition and subversion against mainland China's central government. A previous attempt to pass the legislation triggered protests of half a million people in 2003.

If either Carrie Lam or John Tsang win the race, the Chinese Communist Party will remain unharmed. From John Tsang's performance [as financial secretary] and what is written in his election platform, he will also continue CY Leung’s policies — in the past, he refused to use government surplus to plan for the future, now in his policy platform he still refuses to set up a universal pension scheme and legislation to standardize working hours. Even CY Leung dared not mentioned the enactment of Article 23, but now John Tsang has the guts to do so. The slogan of rebuilding trust, unity and hope is just an empty promise. It is just a local version of the Chinese Communist Party’s “harmonious society”.

To avoid having to compromise on a candidate, pro-democracy lawmaker “Long Hair” Leung Kwok-hung announced he would enter the chief executive race [7] if he receives 1 percent of registered voters’ support, i.e. 37,790 citizen nominations. He would then use the public mandate to persuade the 300-plus pan-democratic election committee members to nominate him.

Leung’s move has triggered another round of debates within the pan-democrats as some are worried that his candidacy doesn't have any real chance of winning.

Long Hair is too stubborn. The 300-plus pro-democracy election committee members only need to follow public opinion and cast their votes in the small circle election. Otherwise Carrie Lam will win. In the past, we didn't have so many election committee members, the chief executive candidates were of a similar nature and the public had not shown any preference. They would not blame the democrats for the result. But this time if the democrats cast blank votes or vote for candidates who don’t have a chance of winning, and Carrie Lam wins because of this, the democrats will be cursed.

But many have defended Leung’s action. For example, university professor Ho Chi-Kwan said on [8] Facebook:

Supporting Long Hair does not mean that we see him as our leader, but it's to build solidarity within civil society to fight the evil Carrie Lam or to monitor the less evil John Tsang. The process is also to establish the mechanism of “citizen nomination” and empower the public to speak out against the small circle election system and to consolidate the values we struggled for during the Umbrella Revolution.

Facebook user Billy Ho [9] said if he were to vote, he would vote for ex-judge Woo Kwok-hing, who he considered the real lesser evil:

If I had to give my nomination, I would give it not to Long Hair, absolutely not to John Tsang, but to Woo Kwok-hing.
I can accept that the mainstream democrats and John Tsang’s fans used the idea that he's the “lesser evil” to campaign for him even before he announced his election platform. Now that John Tsang has released his policy platform, exactly which policy of his is in alignment with the pan-democrats? If you give John Tsang the vote because he is popular, will you give Holden Chow [10] [pro-Beijing lawmaker] the vote if he is popular?
Currently, I can see that Judge Woo has worked very hard to create space for negotiation between the pan-democrats and the pro-establishment camp […]

Woo has proposed to expand the voter base of the chief executive nomination committee and achieve universal suffrage in 15 years. He has also argued that before the public has consensus on political reform, the government should not enact Article 23.

What the pan-democrats should do is use Long Hair and Woo Kwok-HIng as a chip to force John Tsang into presenting more progressive political stances rather than flirting with evil, even if it is “lesser”. You shouldn't make a deal with evil if you can’t exercise control over it, this should be the principle of negotiations.