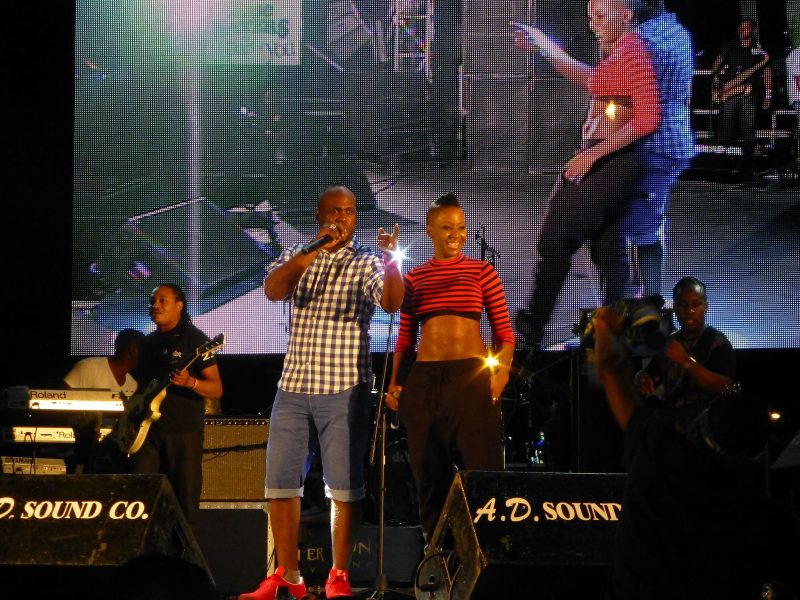 Soca stars Bunji Garlin and Fay-Ann Lyons on stage at the Fire Fête in Trinidad and Tobago in January 2014. PHOTO: Grueslayer (CC BY-SA 3.0) via Wikimedia Commons.

If you're going to be anywhere near Trinidad and Tobago for Carnival 2017, you'll be swivelling your hips and shaking your waist to some amazing music. I've talked about five of the best soca tunes on offer this year in this post. Now, here are my other five picks to round off the top ten. I have a pretty good feeling they'll be on your playlist for years to come…

Soca sensation Fay Ann Lyons has got under my skin with this one. The strong brass riff that opens the song is not something Carnival lovers are unaccustomed to: based on the trumpets alone, you could reasonably assume you were about to hear any traditional kaiso song. But you'd be wrong: what awaits you is an anthem by a warrior claiming her territory. Branding herself internationally as “Aza Sefu”—Swahili for “Powerful Sword”—Lyons proves herself to be just that, a potent soca princess slaying the musical space.

This is such a happy, playful, good-natured road tune, it's impossible not to like it—or dance to it. It has often been said that Carnival is a woman's festival, and although “Shake” is totally fixated on seeing “all de gyal dem vibrate like earthquake”, it is all in a spirit of fun. The song has all the sassiness of the traditional Dame Lorraine Carnival character that features in the single's cover art. Flirtatious, coquettish, the song communicates some of the great joys of Carnival: to see and be seen, to feel appreciated, and to have a grand old time when you “wine dat waist and jiggle yuh bambalam”!

This is the wild card in the bunch. Not being a “jam and wine” number, it isn't typically played in parties, and has zero chance of winning the Road March. But “I Like Mehself” it's so delightfully clever that I can't help but think that the folks who haven't taken to this song must have missed the point. It's a parody, of course, poking fun at the narcissism that seems to have overtaken some aspects of the street parade. The “take a selfie” culture so perfectly suits the Trinbagonian penchant for gasconade that you can't help but smile.

It's far from a throwaway song. The lines “You make a horn and you want to dead/You want to go and eat de devil bread/Me? I want to live instead/Why? I like mehself!” reference the incidence, in Trinidad and Tobago, of murder-suicides by cuckolded men—an unusually lighthearted approach to the the fraught issue of gender-based violence. By the time the minister's voice comes into the mix, asking the persona if he takes himself to love, honour and cherish, I'm pretty convinced that Garcia gets that we might be in genuine need of self-love that goes beyond the superficial, and he has enough of the clown in him to pull it off in a non-offensive way. Haters gonna hate, as they say, but in my book, the tune is groovy, well-produced and gets full marks for holding up a looking glass to our society in an amusing, relatable way.

If one song stands out at the moment as the hit of the season, this is it. Want to understand Trinidad and Tobago in three words? Those words are “We jammin’ still”. That's right, Rome could be burning, but we're not bothered as long as we're partying. It's a double-edged sword, as our ability to laugh at practically anything may sometimes mean the joke's on us. References to the economic recession—”Recession doh bother we, promote a fete and you will see…”—and to the fictional burning of the treasury are a jab at the country's endemic corruption, which citizens complain about but rarely confront. As a lagniappe, the song throws out another telling three-word phrase: “We doh business”, meaning “We don't care”. I love the way the hook crescendoes, getting almost out of control by the end of the song, mirroring the way problems tend to mushroom if they're ignored.

Some have critiqued the song's alleged celebration of the country's “Carnival mentality”, with some social media users admonishing carnival lovers for “jammin’ still” while the crime situation worsens. But maybe the first step towards change is admitting there's a problem. Judging from the fact that this hugely popular “power soca” offering is practically the soundtrack to most Carnival fetes, I think we've acknowledged our idiosyncrasy. The song will likely dominate the street parade come Carnival Monday and Tuesday and maybe this year, after we've had our fun, we'll be energised enough to tackle the really tough issues. Or, as Ultimate Rejects puts it, to “hold them and work them.”

10. “All I Have Is You” by Shurwayne Winchester

One of my favourite calypsoes of all time is Kitchener's “The Carnival is Over”. A tad maudlin, it's a love song for the festival, capturing the “tabanca” you'd feel for a lost lover. “All I Have Is You” is also a love song, except this time the singer's still in the relationship. The tone is peppy and the lyrics outline all the wonderful things that Carnival has brought into the singer's life: joy, new friends, a sense of belonging. When he says, “You are more than you will ever know”, you understand that Carnival is his soulmate, a raft in the deluge of life. Towards the end, when he sings, “I have you to jump and masquerade, have you to fete and misbehave”, there are echoes of Sonny and Cher's “I Got You Babe”. I love the passion this tune exudes. It's a great reminder that despite the challenges we face, we've got something truly special in Trinidad and Tobago Carnival, and like any meaningful relationship, we've got to nurture it.