Jamaica AIDS Support for Life Looks Back at Achievements, Challenges After 25 Years 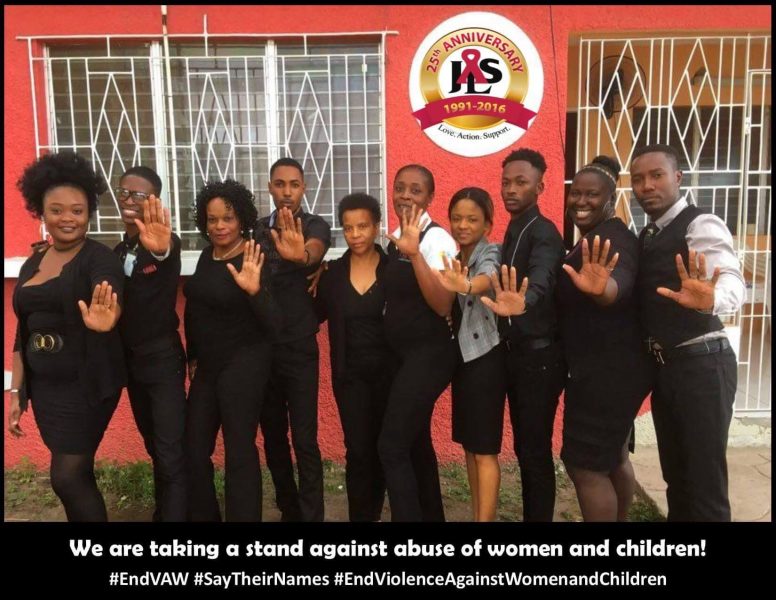 Jamaica AIDS Support for Life staff, showing their support of the anti-gender violence movement. They are all wearing black in protest, as many people did on Monday, February 6, 2017. There is a suggestion to make this a weekly event in Jamaica. Photo courtesy JASL, used with permission.

Jamaica AIDS Support for Life (JASL), the first non-governmental organization to respond to the growing crisis of HIV/AIDS on the island, has been celebrating its 25th anniversary with a series of events that began in late 2016 — and is inspiring a renewed focus for 2017.

On the eve of Jamaica's Safer Sex Week (which includes Valentine's Day), Global Voices talked to JASL's Executive Director Kandasi Levermore, who shared her thoughts on the organization's progress and achievements over a quarter century, as well as her vision for the future.

Global Voices (GV): Congratulations on your anniversary! How has JASL been celebrating? 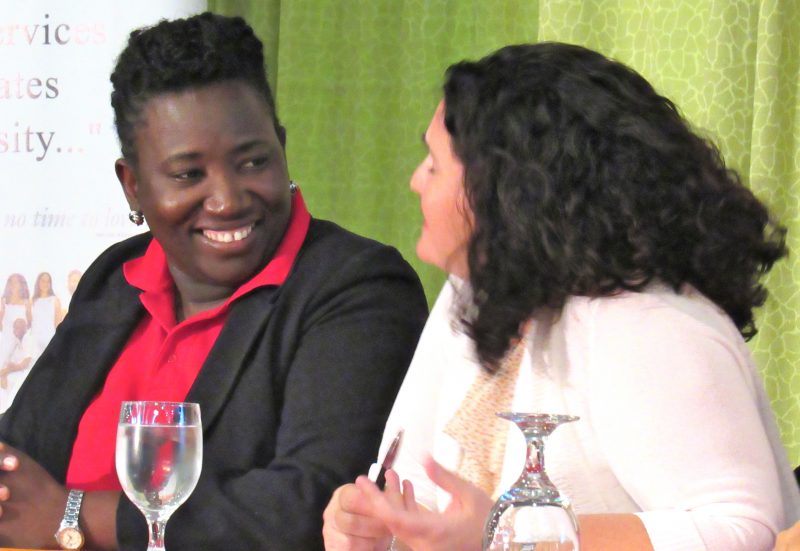 JASL's Executive Director, Kandasi Levermore, and the head of UN Women, Christine Arab, at the launch of the media campaign on gender-based violence and HIV/AIDS, March 2016. Photo by Emma Lewis, used with permission.

Kandasi Levermore (KL): We started last November and will continue for one year. We held a very successful public forum, because we wanted to give all Jamaicans (not just those working in the field) and the media an update on HIV/AIDS in Jamaica. It was broadcast live on radio. We held a seminar on November 24 to disseminate the findings of research on the structural drivers of HIV, sexually transmitted infections (STIs) and other protective factions among key populations in Jamaica (gay, bisexual and other men who have sex with men and transgender women). The principal researcher was Dr. Carmen Logie of the University of Toronto. On World AIDS Day (December 1), we held a joint march and mass testing with the National Family Planning Board of Jamaica. Then, in the evening, we held our annual Candlelight Vigil [which] refocuses us, re-energizes us, although it is a little solemn. We also held a Founders’ Brunch, where we recognized the people from the very early days (the ‘originals’), as well as past employees and long-standing partners such as USAID.

GV: JASL is also actively involved in the fight against gender-based violence, which has become a high-profile issue in Jamaica this year.

KL: Yes! I have worn black for four days this week. But this is nothing new. Now there is a lot of focus on it, because of some gruesome, sensational reports; but Jamaicans could have prevented some of that long ago, if they had been more aware. What people don't understand is that non-governmental organizations (NGOs) like us are on the ground every day; we can see patterns and trends and can help government and other partners create policy, even though none of us invest heavily in research. We can help. On November 25 last year, we held our own march. We completed a three-year program (Expanding Gains to Decrease and Prevent Violence against Women in the Context of HIV and AIDS) funded by the United Nations Trust Fund to End Violence against Women. This included a successful media campaign last year, with partners such as Eve for Life and J-FLAG. There is a strong link between gender-based violence and HIV.

GV: What is the current situation in Jamaica regarding HIV/AIDS?

KL: According to the Ministry of Health, the estimated prevalence of HIV among adults was 1.6% in 2015. The percentage among men having sex with men is estimated at 32%, and among sex workers at 2.9%. An estimated 29,000 Jamaicans are living with HIV/AIDS and 4,640 are estimated to be unaware of their status. 15,000 Jamaicans are on anti-retroviral drugs (the medication is free).

GV: Twenty years or so ago, HIV/AIDS was a “hot topic” in Jamaica. There was a lot of focus on the disease. Do you think it has slowly dropped out of the public eye since then — except once a year around World AIDS Day?

KL: Yes, public awareness has declined, especially among young people, and especially in relation to how HIV is transmitted and how to protect themselves. This showed up in the Ministry of Health's most recent Knowledge, Attitude, Practice and Behavior Survey.

This is currently one of our challenges. So we want to hold another public forum this year — we were very heartened by the response to last year's — and to go deeper into communities; for example, during Safer Sex Week. Our public awareness program — hashtag #StandUnited — just kicked off this year on social media and other platforms, so that the public can discuss what needs to be done. We plan to use it to mobilize resources, for example through crowd-funding.

KL: We are going back to basics. We have channeled most of our efforts towards vulnerable populations, in recent years. Now we have recognized the need to go back into more general spaces where we will likely find vulnerable people also. We will continue to roll out our community strategy, “Walk and Talk”, on the streets. The plan is for each of our three chapters to go into at least two communities per month. We are finding partnerships to facilitate our entrance into these communities.

We are also starting a weekly program on Barry G's show on Mello FM, which has been very supportive in getting information out. There has been an overwhelming response on his show every time we discuss this issue, in the past.

GV: Would you say JASL has been successful over the past 25 years in reducing stigma and discrimination against people living with HIV/AIDS?

KL: Well, discrimination is not half as violent and stark as it once was, but people still talk. Discrimination is more subtle now, not expressed openly, but gestures show disdain. It is still a major problem among health professionals. The health sector has tried to deal with it, but it's still there. There is still a long way to go. To me, this reflects a general lack of compassion among health workers, and in society overall. We do still get isolated cases of discrimination — for example, very recently, a family called regarding a member who had been living in an “out room” (like a garden shed) for some time. Perhaps he had given up on life, though; he passed away. 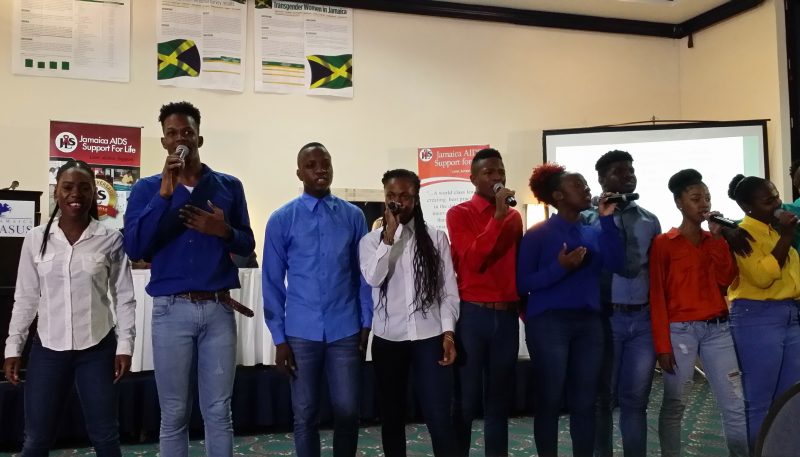 The Ashe Performing Arts Company at the Seminar on Research into the LGBT population, November 2016. Photo by Emma Lewis, used with permission.

GV: JASL has had its fair share of struggles in the past, including funding. What progress do you see now and what are the achievements you can point to?

KL: We started our comprehensive case management system in 2015, and this has made a big difference. We are seeing a lot of improvements in this area. So, our ongoing work in treatment is going well. We have extended the opening hours for our clinics (we have chapters in Montego Bay and Ocho Rios as well as Kingston). Our comprehensive package for clients now includes a psychologist, adherence counselor and nurses, working full-time; and a nutritionist and medical doctor, who come in part-time. We have always targeted vulnerable populations — the LGBT population, sex workers, and Jamaicans with disabilities, especially the deaf. Now we set aside time for deaf clients and when they come in, we bring in an interpreter, too.

We have no significant financial challenges now, unlike in the past. MAC-AIDS has been an important donor, and there is also the Global Fund and the U.S. President's Emergency Plan for AIDS Relief (PEPFAR). Recently, the AIDS Healthcare Foundation is supporting us. The Japanese government is currently assisting us with some building work at our headquarters. The Ministry of Health has always been an important partner. We are extremely grateful. It's not always about money, of course. Quite often it is valuable technical assistance that is provided.

KL: No. We are way off [the Pan American Health Organization‘s] goal for the Americas. Nationally, the percentage is around 10 to 15% for each target. For JASL clients the rate is somewhat higher, around 20%.

GV: Do you have any major concerns, going forward?

KL: Jamaica is losing people with HIV/AIDS out of care. They don't come back and continue with treatment. They are having challenges; we're not sure what they are. JASL manages about 500 cases, and our clients are doing better than average, but this is a concern.

GV: So, how do you feel on your 25th anniversary?

KL: We're 25 years old, but we are trying to stay true to our founding principles: equality, preserving human rights and dignity, and quality service. We work with Jamaicans who are socially excluded, to ensure there is a space for them to get the care and attention they need and deserve.

Our motto is ‘Love. Action. Support.’ But I think we are a little empty in this country. In general, we are void of compassion.