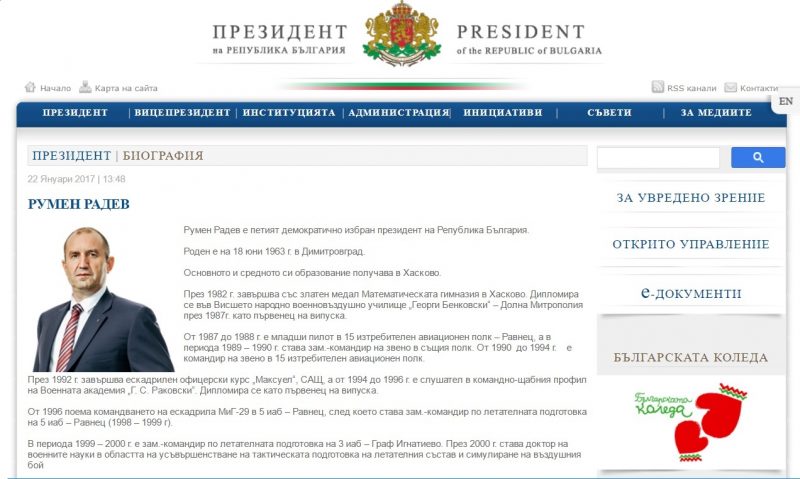 A screenshot from President.bg, presenting the official CV of Bulgarian President Rumen Radev, detailing his career as a pilot and high-ranking army officer. The page is not yet available in English.

Bulgarians have a new president and they're watching his every step very carefully. As the world fretted about Donald Trump in the United States, Rumen Radev won last November's election as an independent candidate with the support of the Bulgarian Socialist Party. He officially took office on Jan. 22.

One of his first moves, ten days after his inauguration, was to veto a law called the New Concessions Act, which would have regulated business dealings with the natural resources industry, like drinking water. The law was passed in the last hours before the dissolution of the previous parliament. It provides for abolishing the maximum 35-year term of concession contracts and also gives the right to open a concession procedure to government ministers and mayors.

Although the previous ruling party supported the law, environmental organizations, labor unions and right-wing nationalist parties all objected to its adoption for different reasons. Given the political drama that accompanied Radev's election and the popular discontent over corruption that helped fuel his rise to power, the veto — and its support across the political spectrum — was seen as an important development.

Environmental organizations protested, saying that the New Concessions Act would give unlimited rights to concession holders, as national news agency BTA reported. The right-wing alliance New Republic alleged that the law serves corporate interests and is aimed at cementing lucrative city cleaning concessions for “the right companies” for decades in a row. Both New Republic and trade union Podkrepa argued that the law was too quickly adopted by Parliament in the last moment of its term. Former President Georgi Parvanov (2002-2012) supported the veto as an anti-corruption measure, and the leader of Bulgarian Socialist Party, Kornelia Ninova, congratulated Radev on what she called a position to protect state property and the public interest.

President Radev justified his decision to veto the law, saying the legislation would have “opened a door to corruption,” and would have required changes in 29 other laws, which he said would only be possible after a “wide-ranging debate.” Radev stressed that a revised law will need to align with new directives from the European Union, or Bulgaria's economy could be vulnerable to sanctions from Brussels.

Others also warned of possible sanctions from the EU if a law isn't passed conforming to the body's new rules for public procurement soon. Emil Radev, a representative of the former ruling party GERB and a European Parliament member, said as much in a television interview on February 3.

While Bulgaria's mainstream media failed to report very deeply about the law, before the veto a group of four citizens analyzed the minutes of the parliamentary debate on the New Concessions Act, and appealed on the online news site Bultimes.bg to Radev to reject it. The group argued that the legislation failed to protect the public interest in transparency and control over concession contracts.

Another citizen, Nikolay Krumov, commented on Facebook about the problem with doing away with a term limit on concessions:

Eternal concession is a term equal to ownership. The extension of the time limit to indefinite is a way to privatize services, rights and functions, which society guarantees to its citizens and therefore they are not for sale!

Expectations for Radev are high. As the BBC stated, Radev's recent rise to power “reflected widespread discontent with the government's poor record on tackling corruption and poverty.” Given the context, the early days of his presidency has attracted an intense focus as he has gone about appointing an interim government, which must prepare early elections in March.

While it seems that Radev's presidential tenure will be tumultuous, some like Janeta Dineva expressed optimism about the new president's first steps in office:

For ten days, Radev not only succeeded to build one of the most balanced governments, not only to go to Brussels and firmly express the will of Bulgaria, but also to put out his first veto!