Alarm about another crackdown on media in Russia spread quickly—and briefly—yesterday when news broke that state media watchdog Roskomnadzor had warned the radio station Ekho Moskvy (Echo of Moscow) that it could be shut down if it does not comply with a law governing foreign investment in media.

While the tabloid website Life News initially reported that Ekho could be shuttered within five days, Roskomnadzor officials quickly clarified that their letter addressed technical concerns—including about the timely submission of certain documents—quieting fears about the suppression of another Russian media outlet.

Roskomnadzor's letter stipulates that Ekho must comply with a 2014 law [1] stating that no more than 20 percent of a Russian media company may be held by a foreign investor. The law came into effect on January 1, 2016 and gave media companies until February 1 of this year to change their ownership structure to come into compliance.

Alexey Venediktov, the editor-in-chief of the station, reported [2] last year that the station had already taken steps to operate within the law: the American company EM-Holding, headed by Russian media magnate Vladimir Gusinsky, reduced its share in the company from 34 to 19.9 percent in order to come into compliance. Gazprom Media, a subsidiary of the state owned energy giant Gazprom, owns 66% of the station.

Venediktov responded to the letter on Twitter, saying Ekho would do everything in its power to comply with Russian law.

We will absolutely fulfill Roskomnadzor's demands, although such an interpretation of the law is unexpected for us. The lawyers are working on it.

Though the law does not specify that shareholding companies cannot be registered in the United States, some initially expressed concern that Roskomnadzor had interpreted the law [4] to mean that foreign ownership of shares in media companies was totally forbidden. 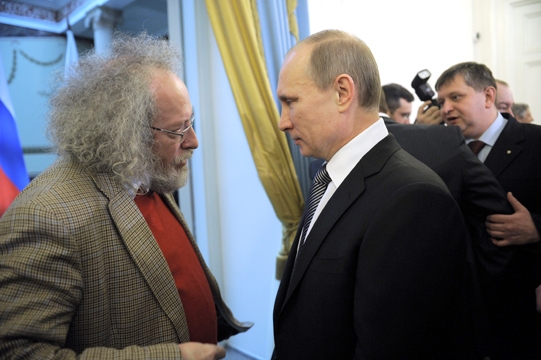 But officials from Roskomnadzor claimed that the letter had nothing to do with possible closure of the radio station. A representative from the agency, Vadim Apelonsky, told [4] Life News that it was merely “a technical, informational letter, reminding about the necessity to follow legal provisions on foreign ownership of Russian media.” Leonid Levin, the head of the communications committee in the Russian State Duma further explained [4] that the letter was “not about breaking the law in terms of the shares of foreign owners but about the need for timely processing of documents” detailing said ownership.

This is not the first time Ekho Moskvy has received special attention from the Russian government. In October 2014, the station received a warning [5] from Roskomnadzor over its coverage of the war in Ukraine. Just weeks earlier, the Russian Ministry of Emergency Services announced [6] it would conduct a snap inspection of the radio station’s facilities, a tactic commonly used to shut down businesses and agencies that have fallen out of favor with the Kremlin.

The station is known for presenting a wide range of viewpoints, including those of opposition activists. Among its regular hosts is outspoken Putin critic Vladimir Kara-Murza, who recently fell seriously ill [7] for the second time in two years, possibly due to intentional poisoning. Anti-corruption activist and opposition leader Alexey Navalny is also a regular contributor; a Russian court found him guilty [8] of embezzlement last week, preventing him from mounting a campaign against Putin in the 2018 presidential election.

And it's no secret that Ekho often rubs Putin the wrong way. At an infamous 2012 meeting of media officials, he told [9] Venediktov, “You pour diarrhea on me day and night.”