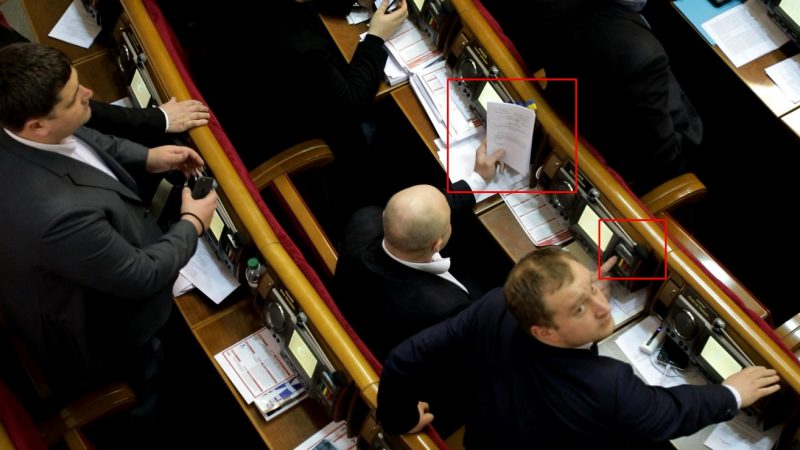 Knopkodavstvo, or button pushing, as the tactic is known, has plagued voting in Ukraine's parliament, the Verkhovna Rada, for years: MPs use other deputies’ identification cards and surreptitiously press the “for” or “against” buttons on their absent colleagues’ voting machines in order to help approve or reject a piece of legislation. Though defenders say voting by proxy helps parliament make quorum when attendance is low, knopkodavstvo clearly violates the constitution, which mandates that deputies vote in person.

Knopkodavstvo is widespread: only two parties represented in the current Rada, former Prime Minister Yluliya Tymoshenko's Fatherland party and Lviv Mayor Andriy Sadoviy's Self Reliance party, have not had deputies found to be engaged in the tactic. Chesno, which means “honestly,” maintains a database [1] of button pushers (knopkodavi) and has called for the practice to be abandoned: since December 2014, 76 MPs have used the tactic, with many having done so multiple times. The most egregious case is that of Oleksandr Urbansky, a member of President Petro Poroshenko's eponymous parliamentary bloc (BPP), who has engaged in knopkodavstvo ten times.

Chesno broke down the recent button pushing incidents in a series of posts on its website [4]. Yevhen Heller, an MP from the Revival party, which is largely composed of members of ousted President Viktor Yanukovych's Party of Regions, was seen walking towards the back of parliament to vote in a colleague's stead on a bill [5] on the authorities given to village, town, and city mayors. The legislation was adopted in its second reading, with 238 votes in favor—12 more than the minimum for a bill to be passed.

Yaroslav Edakov of the People's Front party (led by former Prime Minister Arseniy Yatsenyuk), meanwhile, used another MP's voting machine to vote for a bill [6] (No. 5610) that have would amended the country's criminal code to facilitate the prosecution of former officials during—including those accused of shooting protesters during the climax of Ukraine's EuroMaidan Revolution. The bill was one vote shy [7] of the 226-vote minimum.

As the vote is taking place, Edakov and a colleague can be seen looking up at the camera, seemingly recognizing that they've been caught.

Another member of People's Front, Andrei Ivanchuk, also engaged in knopkodavstvo during the vote: the following video shows that three votes were cast in support of the bill in Ivanchuk's vicinity despite only two deputies being there.

A representative from BPP also “button-pushed” in the vote on bill No. 5610: the following video shows MP Borys Kozyr passing another BPP member Gleb Zagory what looks to be an identification card; later, a screen with the voting breakdown shows that a vote was cast from the empty seat next to Zagory.

Finally, another People's Front deputy, Oleksandr Romanovsky, tried to hide his double voting on a separate bill (No. 4742) about village leadership by using a briefcase.