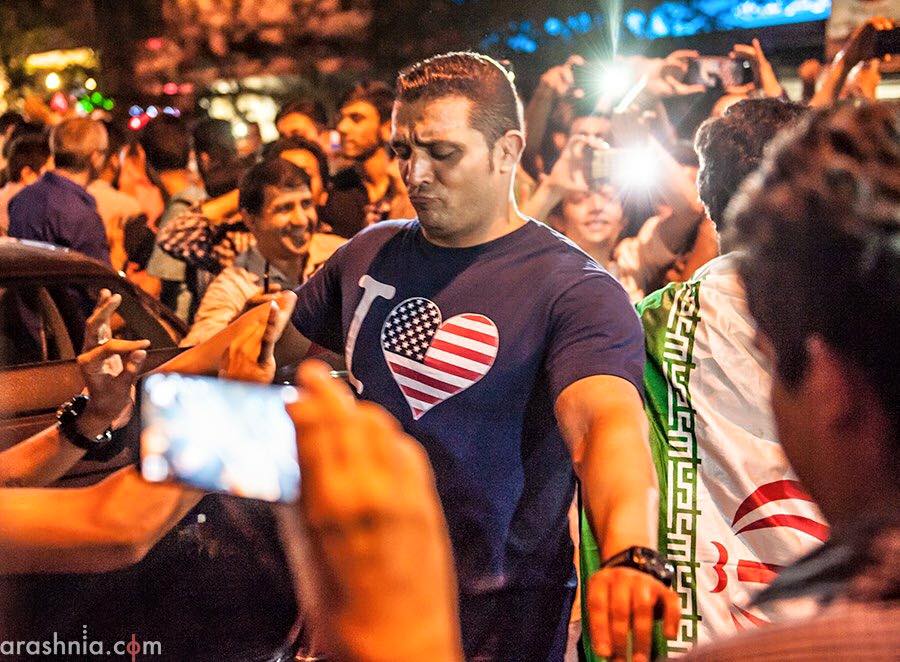 An Iranian man dances in a public gathering wearing a “I heart America” T-shirt. Image shared on Twitter.

Tension between Iran and the United States have been on the rise since President Donald Trump signed an executive order banning travel from seven Muslim-majority countries, including Iran.

To counter the hateful rhetoric between their governments and to show their gratitude towards American protesters who stood against Trump's travel ban, Iranians made #LoveBeyondFlags trend on Twitter.

Along with people from the other banned countries, and with people who protested the ban across America, Iranians are sharing posters, phrases, and images of solidarity between different countries, especially between Iran and the United States.

Let Trump and Mullahs fight in the ring if they wish.
But we are the PEOPLE.
Let us make peace. #LoveBeyondFlags pic.twitter.com/YvpY2OvDJQ

The campaign started Wednesday afternoon in Iran and Europe. By 7:30 pm in Tehran, the hashtag had become a national trend (although this cannot be confirmed since Twitter does not enable trend analysis in Iran due to the filtering of the platform). The International Campaign for Human Rights monitored the hashtag, and noted that through the day there were about 32,000 tweets, with almost 70% of them coming from inside Iran.

Within a week of Trump's inauguration, airports and hundreds of Iranian lives (amongst the seven other countries) were thrown into chaos with the travel ban. A few days later, the Trump administration announced they were officially putting Iran “on notice.”

With the growing antagonism to the Iranian government, and the discriminatory treatment of Iranian nationals at the border, the Supreme Leader of Iran was quick to pick up on this and fire back with his own admonishments of Trump's government.

We appreciate Trump! Because he largely did the job for us in revealing true face of America.

Iran-US antagonism has been a long-standing hallmark of Iran's history since the 1979 Islamic Revolution, but the past eight years had seen a thaw between the two countries under the Nuclear Deal, led in large part by the Obama administration.

The idea for the campaign originated with a popular social media account amongst Iranians, both inside and outside of the country, called Mamlekate (which translates into nation). On @mamlekate‘s Telegram channel, a post urging Iranians not to burn the American flag managed to reach almost 1 million Iranians. 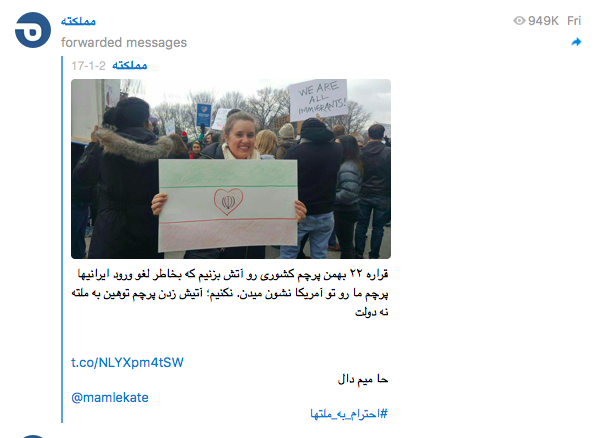 The popular social media account @mamlekate posted about the wrong in burning the American flag in Iran. The post went viral, prior to the launch of the #LoveBeyondFlags campaign.

The account asked Iranians not to show hatred to the United States by burning the American flag.

It’s been planned that on 22 Bahman (10 February) the flag of the country that refuses entry to iranians will be burned, disrespecting our own flag in America. Don’t do this. Setting fire to the flag is a offence to the people of the country, not the government.

Burning the American flag, and chants of “death to America” have been a tradition of the Iranian regime's self-proclaimed resistance to American imperialism, a tradition that started with the 1979 hostage takings at the US embassy. Mamlekate's post generated discussions amongst Iranians who were touched by the numerous Americans who took a stand to show solidarity and support to Iranians, and the other nations. This campaign brought fruition a desire by a lot of Iranians to counter this narrative of hatred between the governments of the countries, which often don't reflect the sentiments between the people.