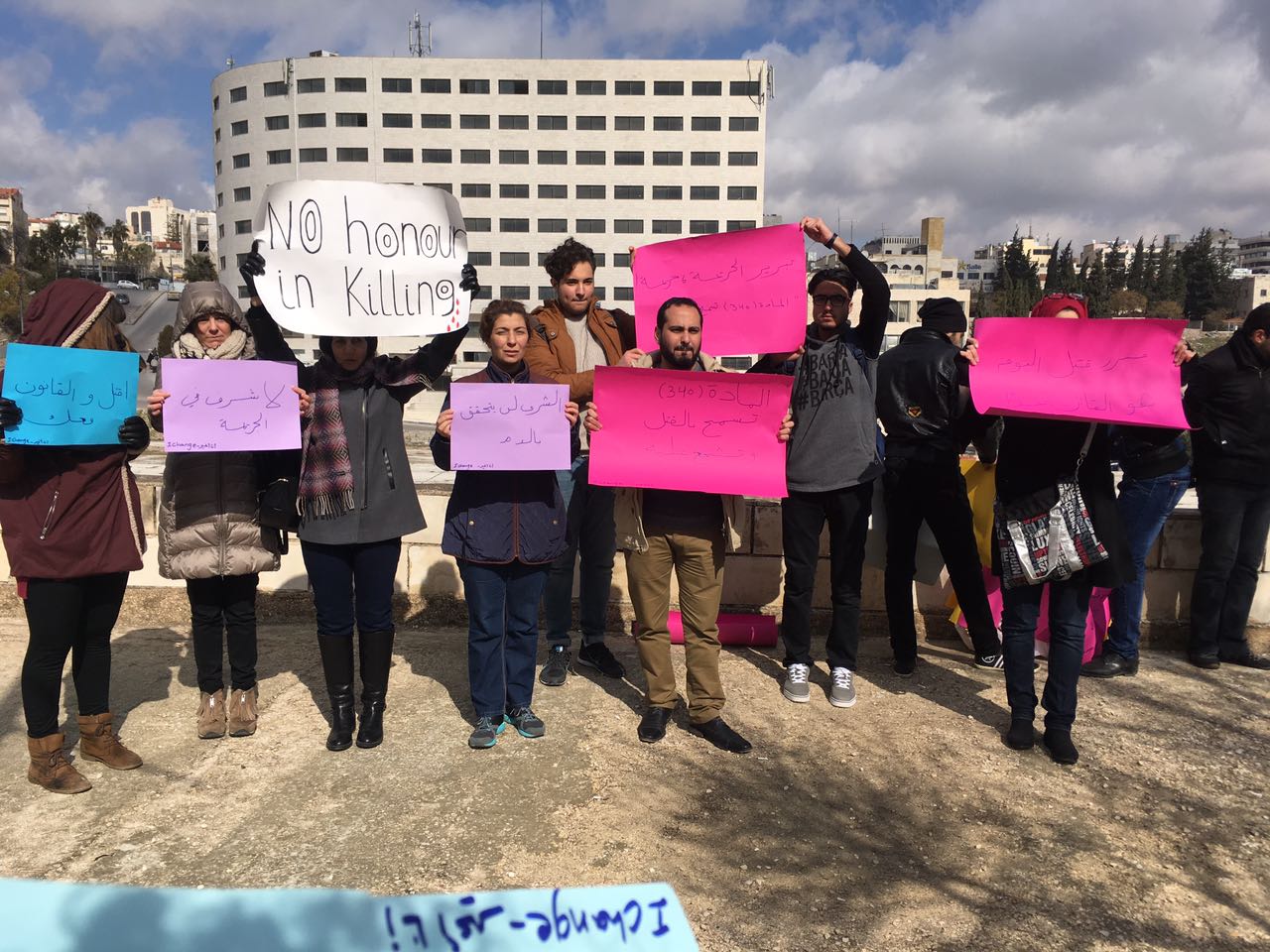 Peaceful protest outside of the Parliament in Amman to repeal Article 340 from the Penal Code. Photo by Nora B.

On February 1, 2017, a group of around 25-30 protesters peacefully gathered in front of the Jordanian parliament in Amman’s Abdali district to call for the repeal of Article 340 of the Jordanian Penal Code, which allows for perpetrators of “honour killing” to benefit from mitigation. Global Voices’ Nora B attended the protest.

So-called honour killings are acts of deadly vengeance committed by male family members against female family members who are perceived to have tainted the family name. In 2016, there were 26 cases of honour killings in Jordan, nine more than in 2015. Reasons for such murders could be premarital sex or as arbitrary as having a secret phone that the family does not know about.

Articles 340 and 98 of the Penal Code allow for reduced sentences for honour killings, with the text of the former stating that whoever finds his wife or one of his female relatives in an act of adultery benefits from mitigation if he murders her and/or her partner.

Article 98 also allows perpetrators of honour killings to have a less severe sentence, with its text stating, “Whoever commits a crime while in a state of rage which is the result of an unjustifiable and dangerous act committed by the victim, benefits from a mitigating excuse.” Sentences could be as light as six months or less if the victim’s family decides to drop the charges, as seen in the case of a pregnant woman suffocated to death in 2007 by her own brother after confessing to him that she was five months pregnant with her ex-husband's child, or the case of a brother murdering his divorced sister in 2003 for being absent from the family home for one week.

There have been previous attempts to repeal the article in parliament, but none succeeded; instead, it was amended in 2001 to give the right of a mitigated sentence to women as well. However, the amendment only applies in cases of assault or murder of husbands, and does not extend to women’s brothers or family members, whereas the article states that men can benefit from mitigation if they murder their wives or female relatives. To date, reported honour killing victims in Jordan have always been women. 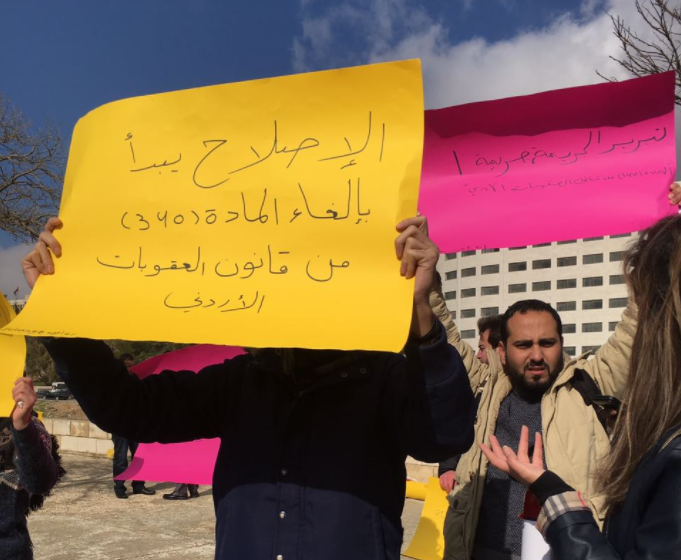 A protestor holding a sign that reads, “Reform begins with the repeal of Article 340.” Photo by Nora B.

The protest was organised by 17-year-old Esraa Tayseer Kudair on behalf of a group called “I Change.” Esraa is a high-school student passionate about advancing women’s status in the country, starting with the repeal of the Article 340. “There are women that are being killed without doing anything wrong, and people are using this law to justify the killing these women,” she told Global Voices. 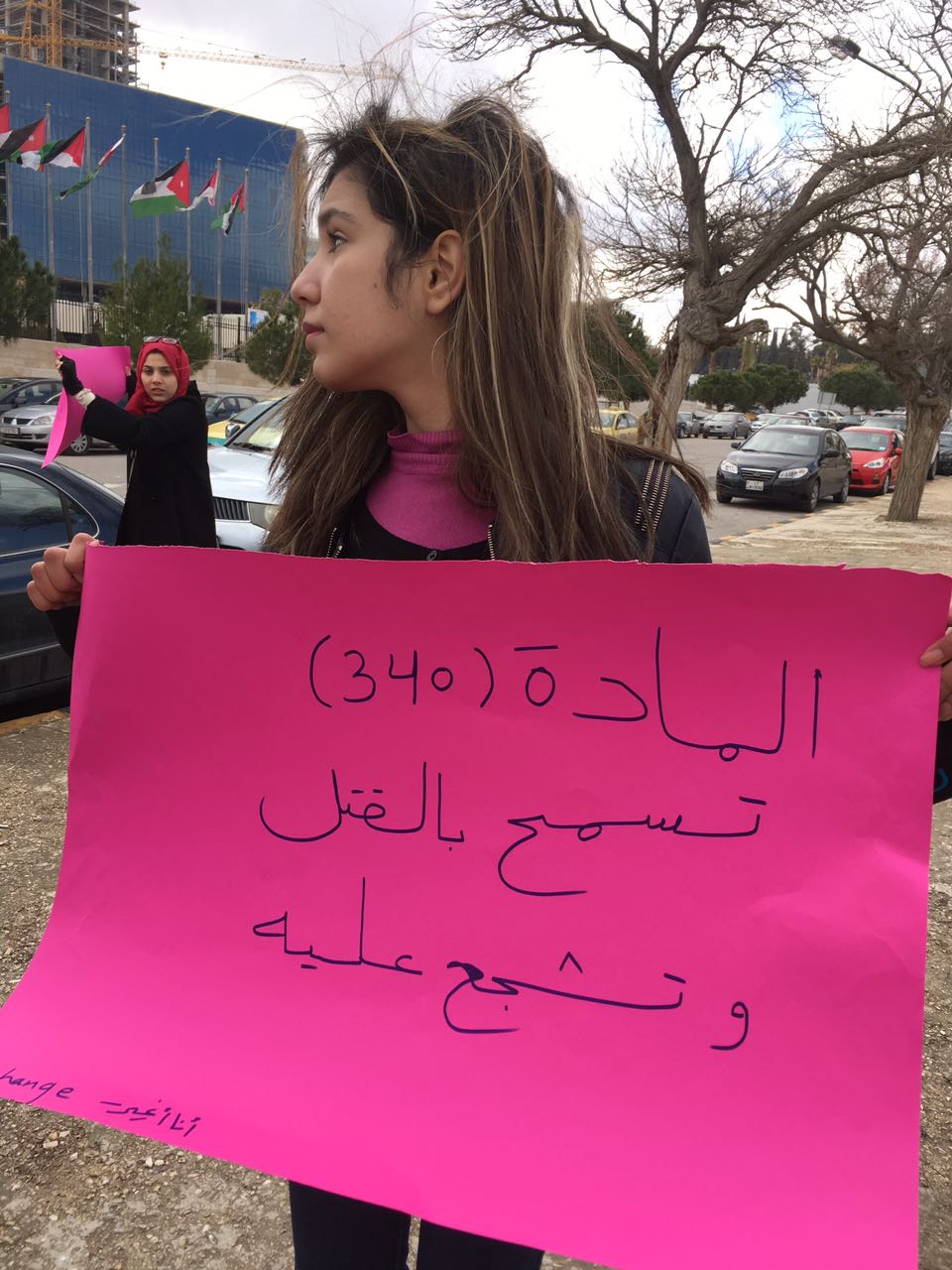 Esraa Kudair, organiser of the peaceful protest, calling for the repeal of Article 340. Her poster says, “Article 340 allows for murder and encourages it.” Photo by Nora B.

Some of the slogans on posters in the protest read: “Article 340 allows for murder and encourages it,” “Kill her, you will be protected,” “Justifying crime is a crime,” “There is no honour in killing,” and “Reform begins with repealing Article 340 from the Jordanian Penal Code.”

Feras Awad, a master’s student of Women’s Studies at the University of Jordan who was present at the protest, addressed the members of parliament as they were exiting the parliamentary building: “This article represents a license to kill, and allows for the murder of women just because they are women,” he said through a loudspeaker. “Times and circumstances have changed: it wasn’t suitable then, and it isn’t suitable now.”

Two members of parliament, Nawaf al-Nuaimat and Suleiman Huwailah al-Zabn, approached the activists at different points. Al-Zabn addressed the crowd and answered questions, saying “We must hold killers accountable, we are with you. I am with you as a member of parliament, as are my peers. We are working towards this direction.” The members of parliament gave their contact details to the organisers of the protest and encouraged them to get in touch and follow up, with al-Nuaimat suggesting that two representatives from the group attend a future session. 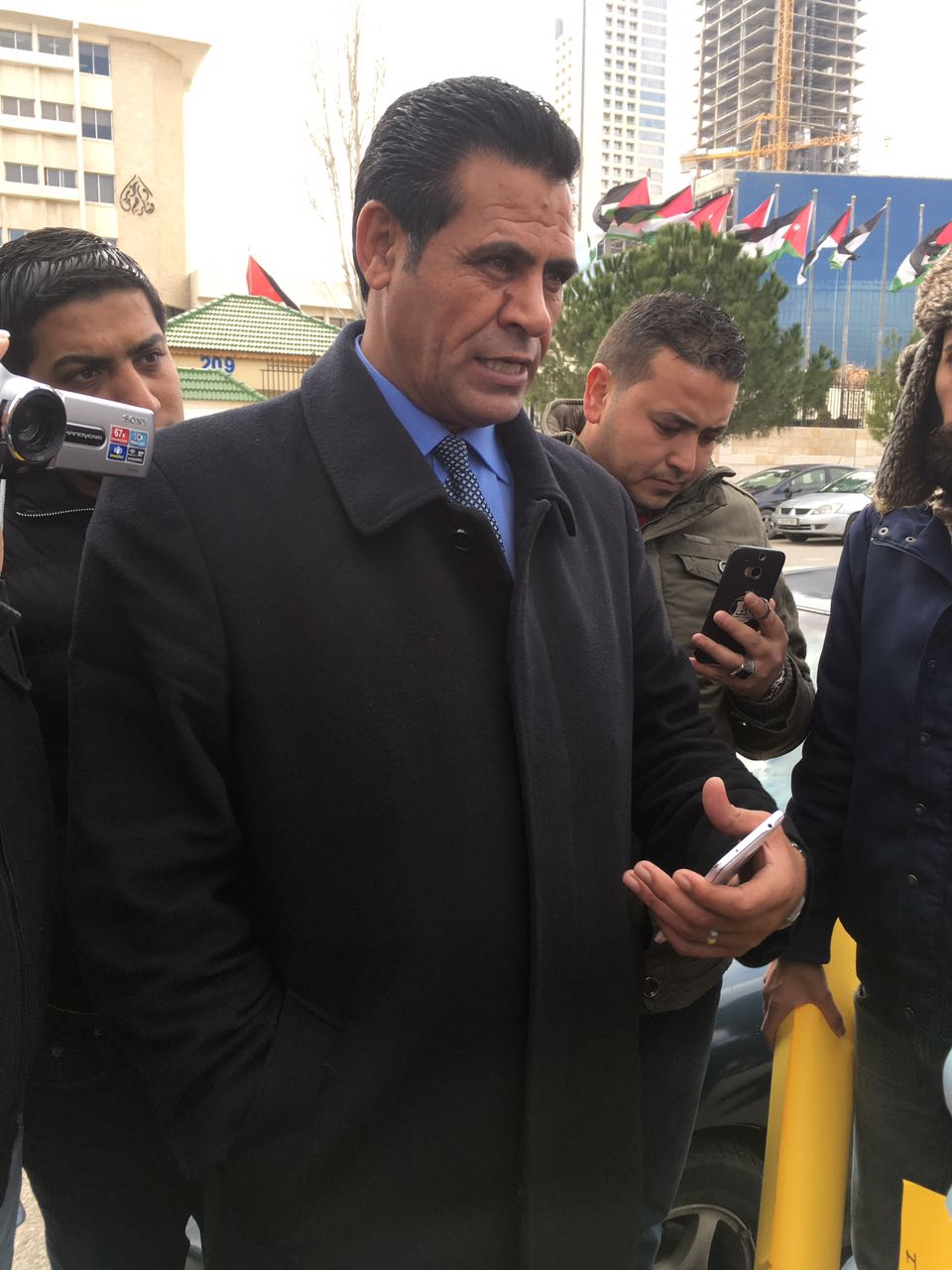 Fighting the law is one thing, but cultural attitudes towards honour killings are worrying still. In 2013, a survey of around 850 ninth grade students in the capital Amman revealed that about 40% of boys and 20% of girls believe that honour killings can be justified. “I Change” is trying to change these attitudes as well as the laws. “I Change is a group of people that are gathered for a reason: to protect women from honour crimes and to educate people on this matter,” Esraa told Global Voices. She says that if this campaign succeeds, I Change might work on other reform projects in the kingdom.