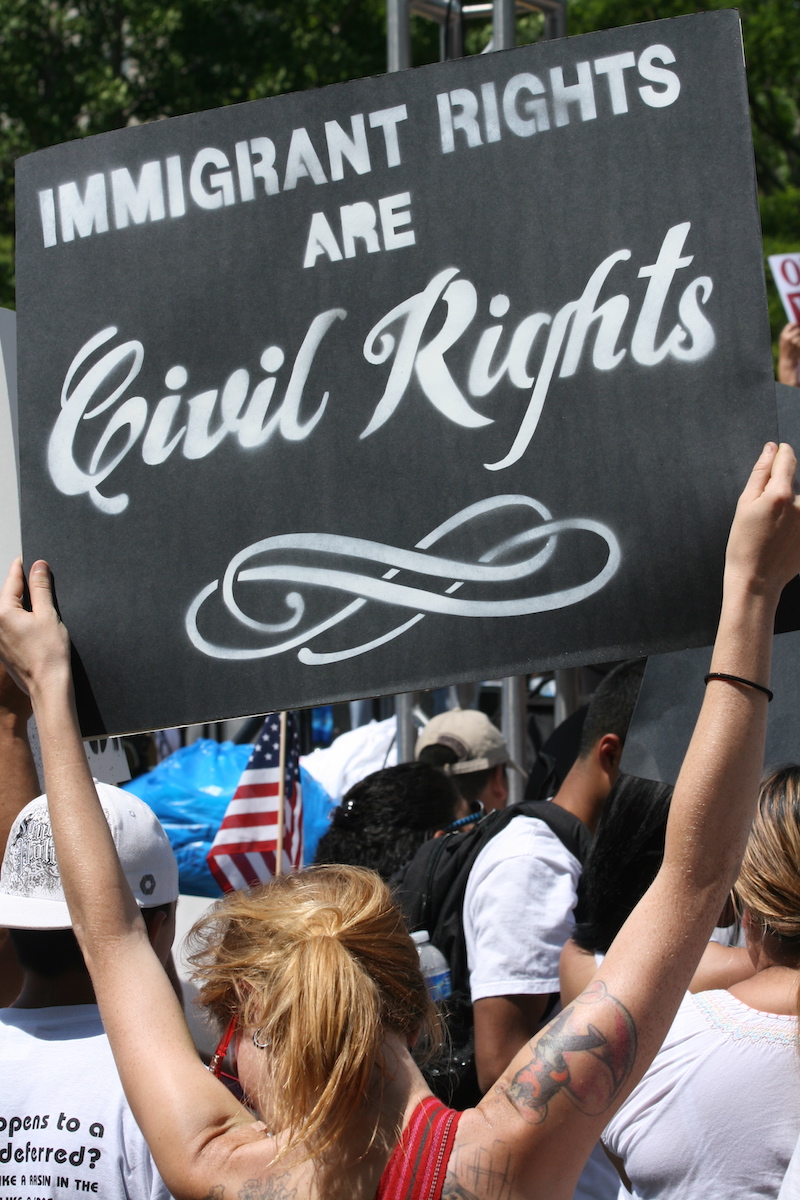 A protester at an immigration rights rally in Washington, DC in 2010. PHOTO: Nevele Otseog (CC BY 2.0)

Ali Kermani, an Iranian national residing in Denmark, was set to enter the United States on a visitor visa in January 2017. Ali's father is suffering from Stage III cancer, and, taking into account the administrative processing typical in cases involving Iranian citizens, Ali had planned the trip months in advance. After several months he received his visa. “But then this order came down,” Ali said, “and I was not allowed to board my flight.”

The “order” in question, of course, is the Executive Order on Immigration signed on January 27 by US president Donald Trump, which sparked a wave of uncertainty, fear and outrage, as well as widespread confusion and panic among both government officials and immigrants and activists in the United States. All of a sudden a traveler like Ali, who had previously studied and worked in the United States for six years and hadn't entered Iran in more than a decade, was faced with intense scrutiny, and now the prospect of a lengthy ban, simply based on his nationality. “I am banned from Iran, because I disagree with the government,” Ali said, pointing out the irony. “Now I am banned from the United States, because of Iran's government.”

Since the signing of the Order, Immigration attorneys, in particular, have been faced with the complex challenge of making sense of a seemingly senseless law, while attempting to guide their clients, and themselves, through uncharted territory. The result has been equal parts challenge and reward, not to mention overwhelming in scope, scale and emotion.

As the Order was signed, Immigration attorneys were tasked with unpacking the implications of the new order for their clients, as well as devising strategies to safely and effectively allow immigrants to enter the United States. There was also the matter of whether or not the order was itself lawful or constitutional.

Reactions ranged from panic and disbelief to anger and indignation. The Executive order was signed with very little warning, and even less in the way of practical direction and explanation. In fact the wording of the order itself was shockingly broad and vague with regard to how it would be implemented and applied.

It is little wonder that there was mass confusion from governmental agencies as to how it should be implemented and who it should be applied to. During the first few days of enforcement, there were numerous reports of Permanent Residents being refused entry, forcing the White House to come out and clarify its position that Green Card holders were not subject to the ban.

This was just one of the many troubling aspects of the order which not only confused both governmental agencies and legal practitioners, but demonstrated serious failures on the part of the administration in its ability to craft and execute policy.

Over the course of the last two weeks, legal practitioners have banded together on listservs, forums and conference calls in an effort to understand exactly what was taking place. Each day something new seemed to pop up. Every day brought new challenges and uncertainties, whether it was the announcement by USCIS that they had frozen all petitions, including asylum applications, filed by those from the seven banned countries, or the resignation of senior officials at the State Department and CBP.

Attorneys on call at airports shared stories of clients who were detained, let through, questioned or returned home. Also shared were recommended ports of entry, and guidance as to what should and should not be recommended to clients.

The initial shock brought on by the order was soon superseded by an organic wave of resistance and solidarity at airports throughout the country. Trump’s orders for exclusion and isolation provided the perfect platform for solidarity among attorneys, activists and community organizers.

The sense of comradeship and cooperation that emanated from these locations was a source of inspiration and hope for many. “The one positive I saw was when I volunteered at Logan airport,” said Joseph Molina Flynn, a Boston-based immigration attorney. “Not only were other immigration attorneys there to assist, but some of my attorney colleagues who do not practice immigration also stopped by to offer assistance and emotional support.” Flynn was one of many attorneys who turned up at Boston’s Logan International Airport. “The past couple of weeks has definitely allowed me to see in real time that the law is a powerful tool, and the positivity of outcomes depends on how it is utilized,” he said.

Boston would in fact play a particularly important role in the battle over the legality of the order: on Sunday 29 January, two federal judges in the city issued a temporary stay on parts of the order, the first of many legal challenges since brought against the Order. Some travelers, including Ali Kermani, tried to arrange to fly into Boston to take advantage of the temporary restraining order. “I knew it was a risk,” said Ali, who was eventually denied boarding the flight to Boston by the airline, “but I thought if I had one chance to see my father, it would be worth any problems.”

Other attorneys who volunteered at airports were also touched by the nexus between legal advocacy and grassroots direct action. “It was a great feeling and it felt like we were winning. Everyone was incredible and willing to do anything,” said Anna N. Yeghiasarian, an immigration attorney from Arlington, Virginia. “It felt so good to see how people came together in such short notice all over the country and even different parts of the world to rally and support the cause.”

Legal advocates organized and responded, in fact, both on the ground at airports, and in filing legal challenges to the Order. On February 3, U.S. District Judge James Robart in Seattle issued a nationwide restraining order temporarily blocking the Order.

For myself, both an immigration attorney and a US-based Iranian, a key challenge was maintaining my commitment to providing proper legal guidance to my clients while also providing reassurances to my family and remaining active in my community. My own uncle and his family were set to emigrate to the United States in early February. I urged them to get here as soon as they could. They landed just 30 minutes before the Order was signed, and were processed at San Francisco International Airport without any major problems. But none of us had anticipated the the fear and anxiety that surrounded their journey and their arrival in the United States.

My own family crossed borders in the past as refugees, undertaking a harrowing journey in order to find a better life. I never imagined that tradition would continue into my own professional career, and in the United States of all places.

The most heartening aspect of the events of the past week and a half has been the climate of hope and solidarity that has emerged in the midst of the fear and anxiety. For me, it’s been a powerful acknowledgement that the law does not always act in the interest of the powerful. The next four years will demand more from those of us who advocate for inclusion, tolerance and diversity, but for immigration attorneys, at least, the time for action appears to be right now.