In Trinidad & Tobago, Clamour for Action After Yet Another Woman Is Murdered 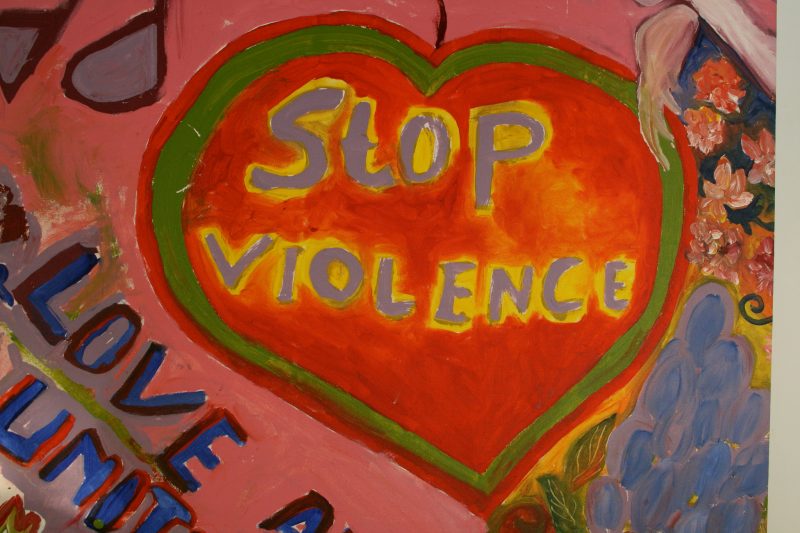 Artwork used for a report prepared for the 2009 ‘Women for Peace’ conference, hosted by the Alola Foundation. Photo: AusAID, from flickr user Department of Foreign Affairs and Trade, CC BY 2.0.

The murder of a young woman on February 7 at MovieTowne, a popular entertainment destination in Trinidad's capital city, has rattled netizens and further eroded trust in the ability of the authorities to curb rising violent crime in the country.

Jamilia Derevenax was apparently lured away from her place of work — a restaurant in MovieTowne — by a phone call from someone she knew. Security guards in the area were alerted by the woman's screams. By the time they arrived at the underground parking area, however, the attacker (although some reports say there was more than one perpetrator involved) had already slit her throat and was trying to flee the scene by car. A man was intercepted by compound security and handed over to police, who now say that the killer escaped and the person held by plaza security is not a suspect.

To many social media users, the fact that the murderer has not yet been apprehended speaks to the poor detection record of the Trinidad and Tobago Police Service (TTPS). There have been spiralling levels of violence — particularly towards women and girls — in the country. Just as disturbingly, graphic images of the victims are often circulated via social media sites messaging apps.

One female Twitter user was concerned that people were becoming desensitised to the violence (Soca Monarch refers to the international soca music competition held during Carnival):

Timeline still talking bout Soca Monarch and a woman now get kill in Movietowne yes. I living in a murder sensitized society

On Facebook, discussion was rife about the country's crime situation.

Facebook user Gilberte O'Sullivan was heartbroken. Saying that the society is “beyond broken”, she changed her profile picture to “a symbolic black and white ‘scarf'” from the Trinidad and Tobago flag, superimposed over the face of a crying woman “to symbolize the women and young girls silenced by murders, as the toll continues to rise”. Many other Facebook users did the same, to let the government — and opposition — know it must “stand against the scourge of violent crime” in the country. 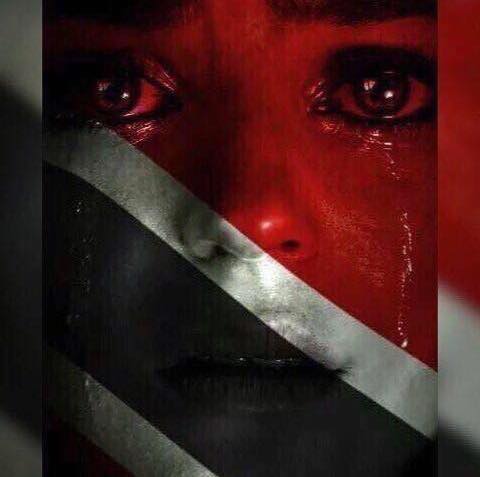 Image of a woman's face superimposed with the colours of the Trinidad and Tobago flag; widely shared on Facebook.

One Facebook user, Lemorev Khaleem, was so infuriated at the impotence of the authorities that he exclaimed, “Look allyuh better legalize crime!!! Do as yuh plz!!!”

There were several Facebook threads which spoke about the pressing need to change the way in which Caribbean men are socialised. Sharon N Boodoosingh, like many other female Facebook users, was concerned about the message that was being sent:

When did we stop teaching our sons that:
— it is the most cowardly act to lift their hands against a woman, be it a wife, sister, aunt, daughter or friend
— differences cannot be resolved through acts of physical, emotional or psychological violence
– children, both boys and girls, are all equal and males are not superior
– they need to show due respect to every woman in their lives
Our homes, schools and society (including the so-called role models) have failed our sons so that they wrongly believe it is no big deal to abuse a woman or to stab and kill her.
#wearejameliatoo

Several women's organisations have been observing the disturbing trend. Powerful Ladies of Trinidad and Tobago (PLOTT), a business organisation that also focuses on social development projects, reposted its crime analysis for 2016, saying:

Tired counting bodies, tired looking at bloodied corpses. What will be the response to a young women found, throat slit at Movietowne Port of Spain? If this shocks you then you have not been paying attention.

As part of its ongoing effort to “raise awareness and understanding of the contributors and repercussions of the spate of aggression and violence across Trinidad and Tobago”, PLOTT publishes a geographic, demographic and temporal analysis of the murder rate on a monthly basis. January's report was unsettling:

January 2017 saw the most murders in our nation's history for the comparative period, however the increase was marginal. The total number of murders committed in January 2017 was approximately 52, this represents a 6% increase in the January murder toll from the highest toll recorded over the last decade. […]

There was also a small increase in the frequency of women murdered. 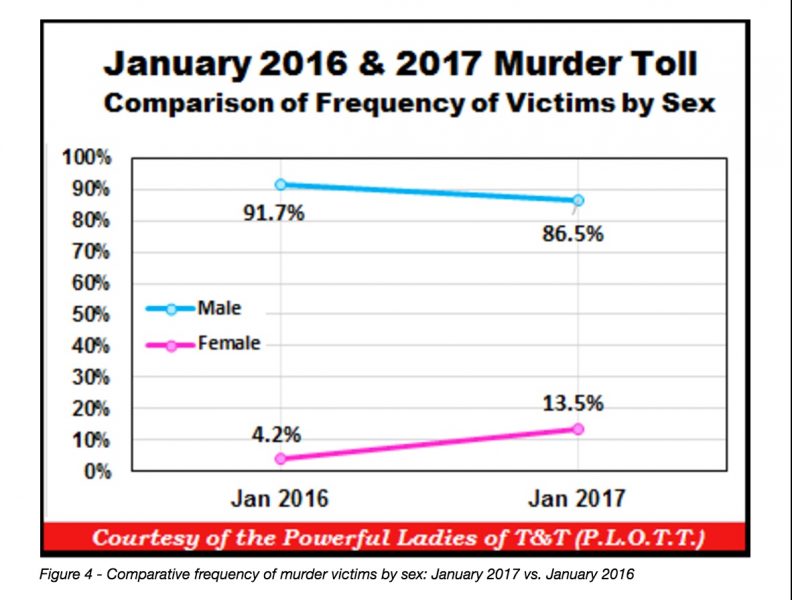 Screenshot of a PLOTT report graph comparing the frequency of murder victims by gender — January 2017 vs. January 2016.

Meanwhile, the Acting Chief of Police has stated that violent crime is down. The PLOTT report discovered an interesting link between economics, politics and violence:

Research conducted by Gould & Agnich in 2016, found a clear relationship between violence against women and failing states, pointing out that although ‘the likelihood of violence is increased for the entire populace in fragile and failing states, women are especially at risk due to patriarchal constraints at the state level, as well as in the private sphere’.

Facebook user Marlon J Jeffers suggested that other factors — such as “when authorities neglected to forcefully do their duties with a purpose throughout the years” — might also be at play. Indeed, many social media users were dissatisfied at the performance of those in charge. Ian Michado Royer's public Facebook status summed up the overriding attitude:

COP [Chief of Police]: Don't be Alarmed by Crime. Kamla [Opposition Leader]: We need more guns. Keith [Prime Minister]: Let's have talks. Yet a young woman is brutally murdered, throat slit, in Movietowne POS Car Park less than an hour ago. We are in a state of emergency and our women and girls seem to be the major target of crime and assault. We must do something now!

Many women, frightened at the trend, agreed. Teocah Arieal Ainka Dove said her spirit was “exhausted […] paralyzed in fear on an island that was once a paradise”. Leanne Audain thought that it was up to women to be one another's keeper, since “no one else is standing and fighting for us”.

How exactly was the Gov't/Police going to stop last night's murder in Movietowne exactly?

Other netizens were not prepared to accept the status quo; Rhoda Bharath was all for holding the police service accountable:

So we discussing crime.
We have an Acting Police Commissioner who is inept.
1. Where is the Police Service Commission that keeps hiring him in all this?
Can we start asking them some questions?
2. Where is the head of Forensics?
3. Where are the Divisional heads at the TTPS?
Can we make them accountable?
Is incompetence grounds for losing your job?
#DeViceCyahDone (Translation: Corruption can’t come to an end)

According to a recent Inter-American Development Bank study undertaken throughout Latin America and the Caribbean, Trinidad and Tobago spends the most money on crime and private security services (more than US $1,000 per capita), with little to show for it in terms of crime reduction. The country's Ministry of National Security received the most funding of any government department in the 2015-2016 Budget — a whopping TT $10.81 billion (about US $1.6 billion).

While the blogosphere was busy discussing the merits of punishment versus empowerment, and prayer versus action, Wired868 published a letter to the editor which cut to the chase:

If 63-plus murders, combined with a number of persons missing, in a population of 1.4M does not constitute a crisis […] what does? […]

The conversations across this landscape has long been dominated by the atrociousness and brazenness where a handful of individuals engaged in criminal activities manage to hold an entire nation hostage. And where many of us are no longer living in fear, but more like surviving—sitting ducks; awaiting our number.