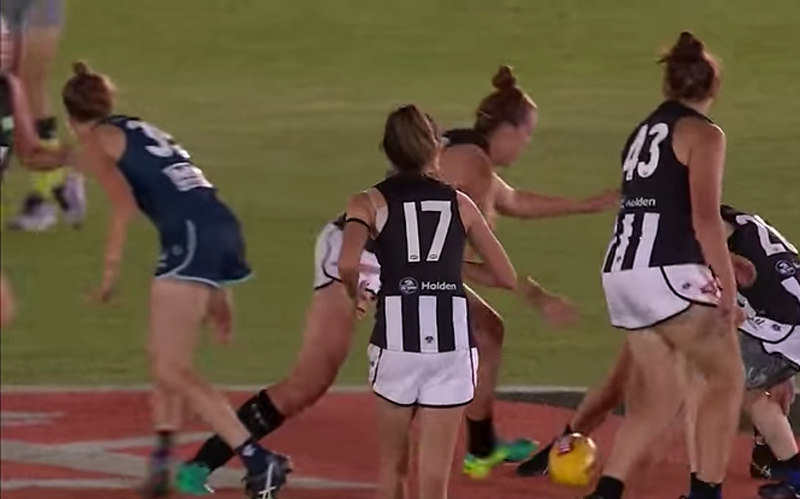 The opening weekend of the inaugural Women's Australian Football League (AFLW) promised much and succeeded in blowing even those expectations out of the ground.

It has been a long wait:

Sally Whyte, deputy editor of Crikey, summed up the anticipation:

It’s like the days leading up to Christmas, but when you still believed in Santa. I’m on the verge of tears just hearing advertisements for the ABC’s call of the matches. There are women in team colours, and a fixture, and a premiership cup. Every detail seems too much. And the siren hasn’t even sounded yet.

AFL, the sport formally known as “Aussie Rules football’ is “a contact sport played between two teams of eighteen players on an oval-shaped field, often a modified cricket ground”, according to the sport's Wikipedia entry.

Crowds at the inaugural weekend for the AFLW were much larger than expected. Even after it had been shifted to a larger stadium, the first game was a lock-out with nearly 25,000 in attendance and over 1,000 unable to get in.

In an article for ESPN titled Baby Girls Can Now Dream Big: Why the AFLW League is so Important, former Victorian player Chyloe Kurdas honoured those who made it happen and those who will benefit:

From Friday, no newborn baby girl will ever know what it feels like to have an AFL door closed to her.

Instead, girls and women across the country are being encouraged to take up the game, and they are doing so in droves.

[…] This cohort of AFLW women should be encouraged to pinch themselves and soak in what it means to be ‘first’. For all of the investment in them and the competition, they have a critical role to play in ensuring that they are not the last.

To experience the joy and excitement of the historic first round of #AFLW, click on one of the four twitter hashtags:

This tweet from cyclist Verita Stewart is a typical one:

There are four Melbourne teams: Western Bulldogs, Collingwood Magpies, Melbourne Demons and Carlton Blues. The state of Victoria, of which Melbourne is capital, is the traditional home of the sport.

The other four teams are from the states of South Australia, Western Australia, Queensland and New South Wales: Adelaide Crows, Fremantle Dockers, Brisbane Lions and Greater Western Sydney Giants. The other 10 clubs in the men's AFL competition will have the chance to join the AFLW in future years.

Many people are already supporters of one of the other 10 clubs in the men's national competition or are relatively new to AFL. Prolific tweep @Asher_Wolf spoke for newcomers:

Alright, I've decided to back women's football. Which team should I barrack for?

After she went to the opening game, Asher shared her conversion:

I spent the match gazing in awe at the size of the crowd, appreciating the goodwill of the people around me: the fathers with young daughters beside me celebrating, and women cheering themselves hoarse as the twilight faded; the blare of the evening lights illuminating the field of athletic footy players, sprinting across the grass, leaping air-borne and ramming each other to the ground. The ball felt almost incidental to the game. We were there to watch the players. We were there for the moment.

She has a warning for the AFL:

The AFL has consistently underestimated women for generations and locked them out of the game. The AFL locked out thousands of women yet again last night, the same way they’ve been locking women out all our lives, because the AFL continues to underestimate women’s interests, talents and force of will.

We won’t put up with being underestimated.

But we will be there.

The AFL can count on it.

If your appetite is whetted by the video highlights below, then visit afl.com.au where games are live-streamed.