A Three-Minute Online Video Explains the Essence of Balkan Nationalisms 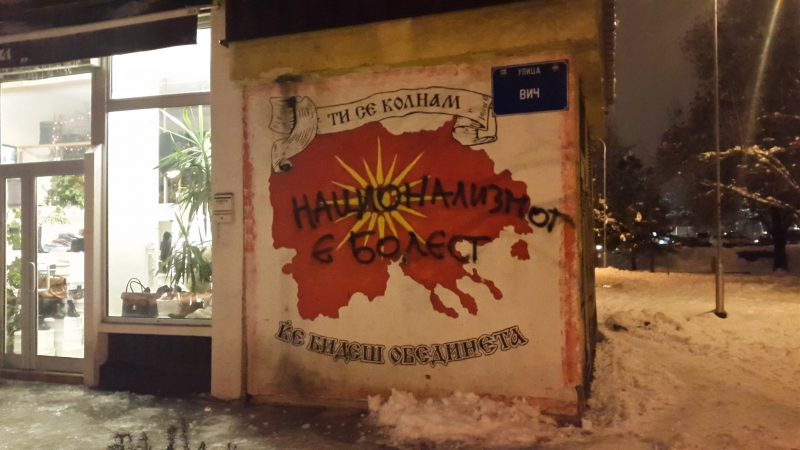 Graffiti in Skopje, Macedonia reading “Nationalism is a disease!” The message vandalizes a small mural featuring a map of ‘Ethnic Macedonia’ (encompassing the Republic of Macedonia and territories in neighboring countries) and the message “I swear to you, you'll be united!”. Photo by GV, CC-BY.

A video clip made by the team of Balkon3 online magazine uses less than three minutes to explain the main absurdities of greater state nationalism in the Balkan region. Its lessons are also broadly applicable to countries suffering from right-wing populism outside the region.

1. Every country in the Balkans believes that it should be bigger than it is. We’d need at least one more Balkan peninsula to satisfy everybody.
2. But none of them considers that as taking something away from the others. Rather they see it as “regaining their own territories”…

The video is part of a series “Let Me Illustrate For You” which is a translation of a Macedonian idiom (да ти нацртам) meaning literally “let me explain this in very simple terms.”

During the last few months the magazine has been making short videos explaining basic concepts such as civic engagement, modern democracy and role of political parties.

The name of the Balkon3 magazine comes from the word “balcony.” Founded by journalists from Macedonia, Greece and Turkey, it offers content in Macedonian, Greek, Albanian, Turkish and English, aimed at fostering a better multicultural understanding. Their motto is “Peek into your neighbor's yard, go out on a balcony.”

If this video whetted your appetite for more local commentary on Balkan mentality and culture, check out the English-language song “No Escape (from Balkan)” by the progressive Bosnian band Dubioza Kolektiv. The song's lyrics refer to regional stereotypes, as explained by a diaspora member to a Westerner.