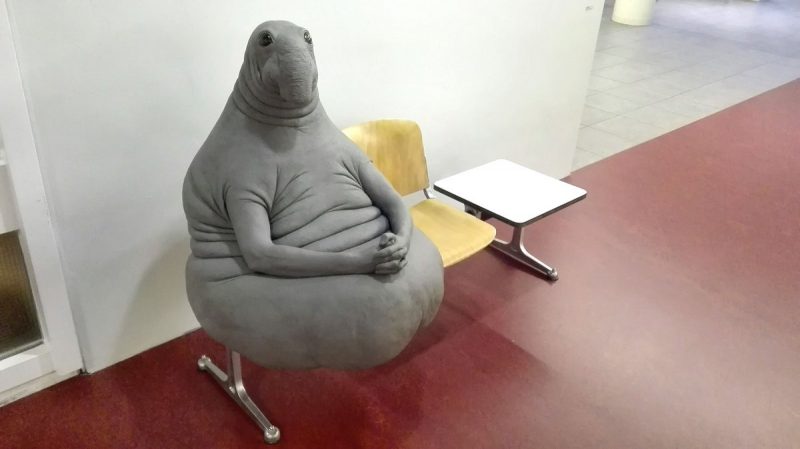 If you’re like me, yuck, and you probably spend too much time browsing the Russian Internet, where you’ve definitely encountered a bizarre-looking walrus thing sitting on a chair, clasping its hands in quiet anticipation.

That’s Zhdun, or “Waiting Guy,” and he’s been menacing Russian cyberspace for the past week or so, ever since he popped up on the image-board forum Pikabu, where user Leiapingui shared Zhdun’s photo and asked the community to come up with a name for the friendly seeming abomination.

It turns out that the object already had a name: Zhdun.

Zhdun is the work of Dutch sculptor Margriet van Breevoort, who says she designed the creature as a comment on scientific research in the field of medicine. According to her website, Breevoort created Zhdun while thinking of doctors’ reception rooms, where children wait to learn the results of their examinations. Zhgun was built to be a waiting-room companion — hence his name.

As a meme in Russia, Zhdun exists as a play on the theme of “waiting around,” often for something that might never happen.

In one popular tweet, Zhdun perches on the unfinished Kerch Bridge, which will connect Crimea to the Russian mainland. “We’re waiting for the bridge,” a caption reads.

The website Meduza edited Zhdun into a short video filmed inside a courtroom in Kirov, where anti-corruption activist Alexei Navalny is currently busy with a retrial of the felony case that once robbed him of the freedom to run for elected office.

The sculpture has also appeared in faux promotional materials for this year’s Eurovision Song Contest, which will be held in Kyiv, Ukraine. In the picture below, he’s wearing the competition’s new logo as a necklace.

Despite his lack of feet, Zhdun has even found himself in Vladimir Putin’s shoes. The photo below depicts Zhdun in the commander-in-chief’s seat, “awaiting the end of sanctions.”

You won’t be surprised to learn that there are a lot more Zhdun-related posts on social media. I won’t review them here, but you can check out some of these mashups at Russia Beyond the Headlines, where Alyona Boldyreva and Anastasiya Karagodina collected several.

But the most important news is that the public's infatuation with the creature could be coming to an end, finally.

On Feb. 1, the Moscow Subway’s official Twitter account also shared a Zhdun image, thrusting the meme into the mainstream and hopefully forcing Russia’s Internet subculture to go look for something new.

There's not long left to wait! Come meet “MoscowTrain” this spring on the Tagansko-Krasnopresnenskaya line