Women Facing Violence in Ecuador Vow to Be ‘Silent No More’ 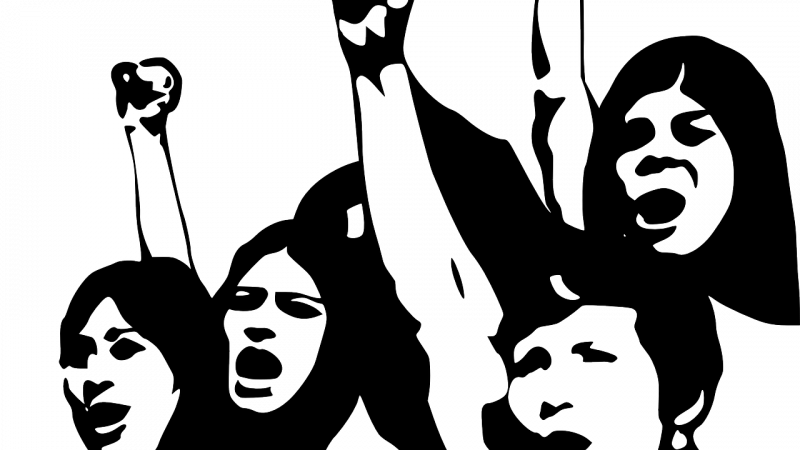 The activists say they want to “break the silence.” According to the 2011 National Survey of Familial Relations and Gender Violence, six out of every ten women in Ecuador have been victim of some kind of abuse.

This January, the initiative “No callamos más” (“Silent No More”) started gaining momentum. The campaign is an effort to get women talking about the harassment, abuse, and mistreatment they've experienced firsthand.

In an interview with Global Voices, the project's co-creators, Verónica Vera and Francisca Frisone, explained how they were inspired by other movements in Latin America, such as the hashtag #MiPrimerAcoso – a campaign which started in Mexico but soon spread throughout the region – that helped draw attention on social media to the abuse of women.

“Silent No More” is an invitation for women to put their stories into words, so they can be brought together, with the aspiration of feeling supported, and that we are not alone, and that our stories are shared and have something in common.

The Facebook page “No callamos más” (Silent No More) currently has more than 6,600 subscribers, and it can also be found on Twitter at @nocallamosmas. Stories about violence, abuse, harassment, beatings, rapes, gropings, and more have been published with the permission of the women who experienced this abuse. 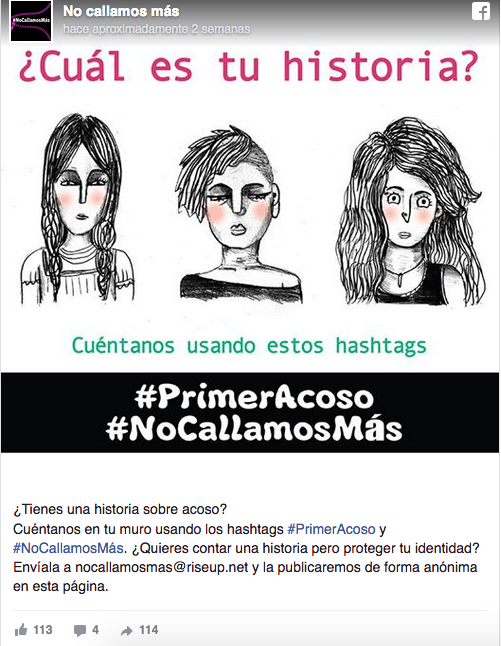 ¿Cuál es tu historia? (What is your story?) Screenshot from Facebook. Caption: “Tell us using these hashtags: #PrimerAcoso (First Assault) #NoCallamosMás (Silent No More). If you want to tell your story but protect your identity send it to nocallamosmas@riseup.net and we'll publish it anonymously.”

This campaign's first step, Francisca said, was to create a private group for women. That community now has roughly 26,000 members. Not all of these women have shared their testimonies, but those speaking up have permitted the campaign to share their stories on Silent No More's public Facebook page.

“I didn't want to. I told him no. He started to ask me again and again for me to do it…” begins one story. “I had an episode with a neighborhood store owner who wanted to take me to the back room of his business with promises of sweets and gifts. One time he invited me in, showed me his penis, and I ran out,” says another.

Silent No More is also working to inspire people to stand in the way of future violence. On Saturday, Jan. 28, the group held a reunion in Quito, in the “El Arbolito” park, inviting citizens to speak up on social media, with their families, and in all spaces of society.

With these efforts, the movement's organizers say they hope to create more safe spaces, where women can address the problem of abuse and its consequences.

In Ecuador today, more than half of all violent crimes committed nationally are acts of gender violence. According to the government, there were 80 femicides recorded in 2016. In the first four days of 2017, police recorded one femicide every 32 hours.

Update, Jan. 23, 2017: the Facebook page that displays the content from the campaign shut down for three days due to the complaints that accused the group of infringing upon the rules of Facebook concerning the use of sexual content.