Myanmar citizens are still in shock following Sunday's gruesome assassination of U Ko Ni, the country's state legal advisor and a prominent member of the ruling political party, the National League for Democracy (NLD).

U Ko Ni, a lawyer who joined politics to support NLD party leader and Nobel Laureate Aung San Suu Kyi, was killed at the country's main international airport in the city of Yangon, moments after arriving from Indonesia.

After Myanmar transitioned to democracy in 2010 with a military-controlled parliament, Aung San Suu Kyi — the national opposition leader — was released from house arrest.

Activists like U Ko Ni later joined her to form an organized opposition party. U Ko Ni was most noted for speaking out against military abuses and for his in-depth knowledge of the 2008 Constitution, which guaranteed military control in the parliament.

After the NLD won the second general election in 2015 in a landslide, U Ko Ni became the state legal advisor.

During the election campaign, the country's military-backed party made efforts to adopt the rhetoric of anti-Muslim sentiments and Buddhist nationalism. Along with Aung San Suu Kyi, U Ko Ni — a Muslim politician — was one of the most frequent targets of hate speech and threats by the Buddhist nationalist groups.

In response to the death of U Ko Ni and a taxi driver, U Nay Win (who  died while trying to save him), many people in Myanmar have mourned on social media, blackening their profile pictures. Progressive Voice, a network of human rights advocacy organizations, honored the life and legacy of U Ko Ni in the following text:

Our condolences are with his family and others close to him. U Ko Ni was a highly-respected, intelligent and passionate constitutional expert and lawyer with an unwavering devotion and strategic approach towards overturning the 2008 Constitution that entrenches the military’s current dominance of political life and achieving a new constitution that guarantees a system of governance based on democratic values and principles.

Activist Thet Ko Ko also paid tribute to the taxi driver who was also gunned down at the airport, while trying to pursue the assassin:

The fact that U Nay Win died trying to save U Ko Ni is exemplary for Buddhist and Muslims in our nation. The only common thing of the two people from two different faiths is their love for our country. Rest in peace U Ko Ni and U Nay Win. We are praying from depths of our heart.

Political analyst Maung Zarni shared his thoughts about the political motives of the assassination. He speculated the involvement of organized group behind the assasination:

Shooting U Ko Ni dead in the head at a high profile place like Yangon Airport, upon arrival from the official visit to Jakarta to go and study peaceful, interfaith life in Indonesia, was, in my view, to make the point that Muslims assuming advisory positions to NLD and ASSK would cost life.

Additionally, it is meant to further inflame religious bigotry as the news of the killing is widely reported and shared on Burmese language social media.

This is a calculated political move, not simply a homicide.

U Ko Ni is still serving the country for one last time, even after his assassination.

He united almost 100,000 people of different faiths at his funeral. 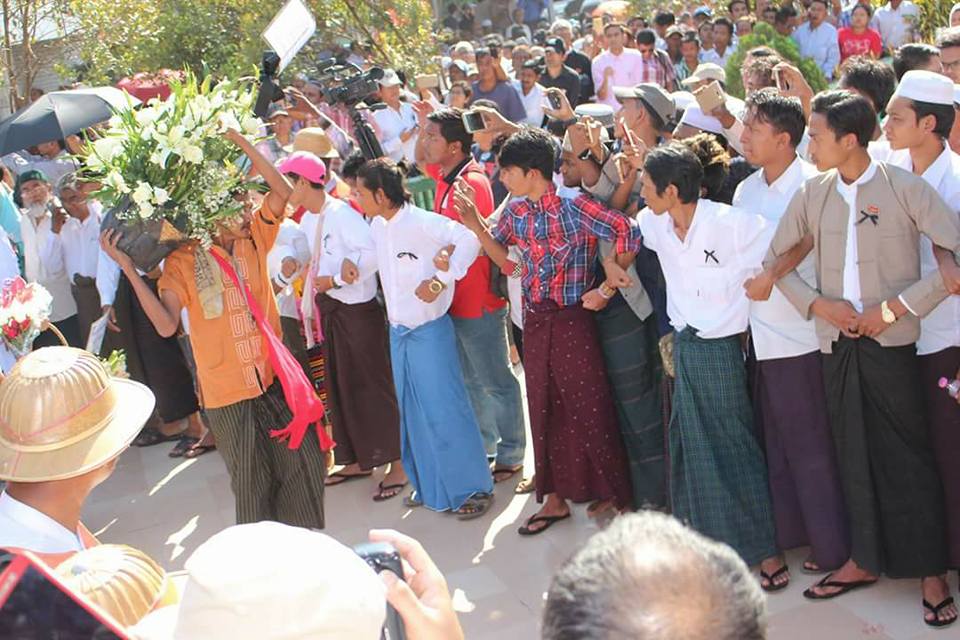 Picture of the funeral of U Ko Ni shared by Facebook user Kyaw Kyaw Win.

Facebook user Ei Myat Noe Khin described the assassination as a throwback to the era of Myanmar's military dictatorship:

I feel like we are back in the old days when the dictator ruled. We thought those days are over but yesterday's event just reminded us again. insecurity, fear, uncertainty.

remind us again that we have to work hard — harder than other people and unite more to speak out, point out, bring the impact to the country.

This is Myanmar's first political assassination in many years. The last killing of such a high state official was 70 years ago, when national leader General Aung San, Aung San Suu Kyi's father, was assassinated along with other political figures.