How to Reintegrate the Afghan Boys Used as Sex Toys of Powerful Men? 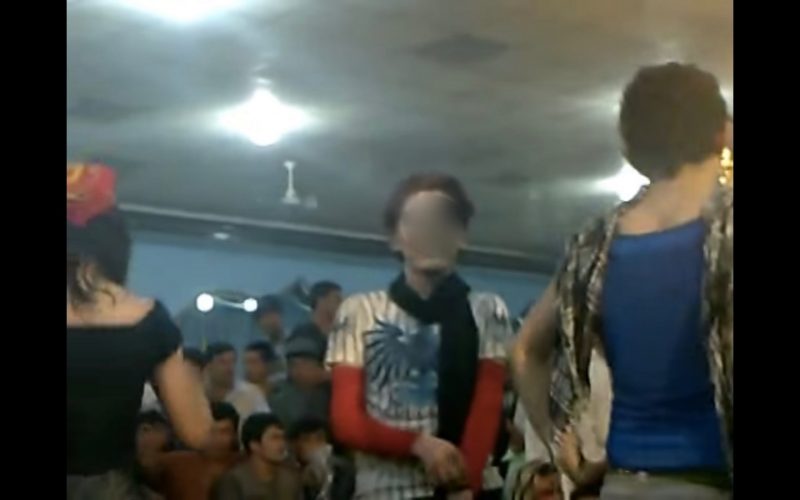 Screenshot from video of Bachi Baza males dancing shot in hotel in Kabul. Video uploaded onto YouTube by the user Sofi on September 9, 2013. Face of dancer blurred to protect identity.

In Bacha Bazi, a sexual practice involving two males that has remained common in Afghanistan through many centuries, relations are far from equal.

Today, the practice, which translates roughly as “boy play” typically involves an older man (often a powerful military commander either on the government side or the militant Taliban) and a young boy, aged between 14 and 18.

The boys are bought or sometimes kidnapped from their families and retained by their well-armed patriarchs for dancing, games and sexual pleasure. They are treated as possessions to bolster a warlord's standing in front of his peers, and their reintegration into society often ends in tragedy.

According to Akhilesh Pillalamarri, writing in the Diplomat, the ongoing prevalence of Bacha Bazi highlights “the tragic situation where consensual homosexual relations are punishable by death [in Afghanistan], while exploitative relationships with boys are simply winked at.”

While the historical origins of Bacha Bazi are difficult to trace, the practice is well-noted in literature. Great Persian-speaking poets from the fourteenth century including Hafiz Shirazi and Jami Herati penned verses in praise of the handsomeness of their boys. In his book Shahed Bazi dar Adabiat Faris (Bacha Bazi in Persian literature) a professor of Persian literature at Tehran University, Sirus Shamisa, claims that the anonymous muses of Persian romantic poets were often males, rather than females.

Some speculate that Bacha Bazi has sustained its presence in Afghanistan due to the distance traditionally maintained between the sexes throughout childhood and into adolescence.

The practice undoubtedly boomed, however, during the war of resistance that followed the Soviet Union's invasion of the country in 1979.  Mujaheedin fighting the invading force spent long periods away from home in remote mountainous regions where child soldiers would be among their companions.

More recently, in December, The Afghanistan Independent Human Rights Commission (AIHRC) warned that Bacha Bazi had surged again, following intense conflict in the northeast of the country. The commission called on the parliament to pass anti-Bacha Bazi laws.

Although the tradition is strongly associated with the northern regions of Afghanistan where resistance to the Soviet incursion for over a decade was concentrated, Taliban forces, whose sanctuaries are in southern and eastern Afghanistan, are now the biggest perpetrators.

This is in spite of the fact that, when in power prior to the US-led invasion of 2001, the group took steps to outlaw the practice and punish the older men involved in it.

Afghan social media users opposed to the Taliban strongly criticise the group for engaging in Bacha Bazi. But such criticisms often have the unfortunate side-effect of deepening the stigma surrounding the boys themselves.

Sodomy and Bacha Bazi (boy play), sexual exploitation of young boys among the armed Afghan Taliban is beyond description.

Torpedoes of the Taliban

Bacha Bazi boys can be deployed as weapons, as well as wartime concubines. In April 2015 the Afghan National Directorate of Security arrested a sixteen-year-old for attempting a suicide bomb attack after he was reportedly gang-raped and directed towards his target — the Bagrami district police headquarters in Kabul — by the Taliban.

According to a special report by the Agence France Presse (AFP) news agency, the Taliban also uses these young boys as prey to lure in the soldiers and policemen of the Afghan state.

Afghanistan is only an Islamic country by name and no Sharia law is implemented in here. Because in Islam those who change their gender are cursed and are supposed be punished hard. But in Afghanistan Bacha Bazi  almost have became a culture. [Sic]

Beyond the battlefield, the boys are used as dancers in weddings and parties, where they put on make up and dress like women.

Once older than 18, they are often released by their masters, but their problems don't end there.

These boys are war victims, not criminals

The AIHRC's call to criminalize the practice will do little to help the victims, especially given chronic problems enforcing laws in Afghanistan.

What must certainly change is the widespread view that Bacha Bazi victims are morally and sexually impure, which has led to their rejection by their own families and society as a whole. It is precisely due to these perceptions that victims are increasingly falling prey to radical militant groups keen to offer them redemption through the pursuit of a supposedly divine cause.

Currently Afghan society struggles both to acknowledge the extent of the problem, and to accept that these boys are similar to other victims of the country's wars, such as the victims of Taliban land mines or ISAF coalition drone strikes.

One potential instrument to aid their reintegration could be the AIHRC itself. Currently the commission has a department that helps women who have faced domestic violence, but nothing specific for the male victims of Bacha Bazi.

Better institutional support for these traumatised boys and young men would go some way towards rolling back the cruel stigmatisation they have done nothing to deserve.