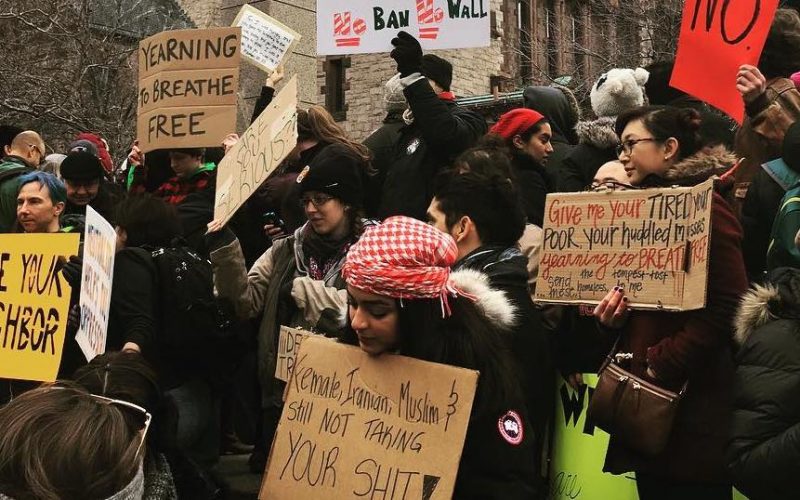 Protest against the Executive Order on Immigration in Boston. PHOTO: little celería via Instagram. Used with permission.

Last Friday afternoon, perhaps around the time the ink was drying on the US president’s now infamous Executive Order on Immigration, a group of people in a lecture room at the University of the West Indies in Trinidad and Tobago were watching the first episode of the Brazilian Netflix production “3%”.

The series envisions a dystopian future in which young people are subjected to a series of tests to assess their fitness for admission to Offshore, the earthly paradise where only 3% of candidates gain entry. In one sequence in the episode, candidates are subjected to a humiliating interrogation. In the discussion that followed, a student said it reminded her of visiting the US embassy in Port of Spain. There were murmurs of recognition around the room, including from me. Once, in the early G. W. Bush years, my beat-up Honda Civic shut down on the side street near said embassy. As I tried to coax the engine back to life, two US Marines appeared out of nowhere, brandished assault rifles and yelled at me—evidently a suicide bomber—to “Stand down!” And that was outside the building. Inside, in the embassy’s consular section, the atmosphere can be nearly as anxiety-inducing.

One aspect of the drama surrounding the Executive Order that's resonated strongly for me is the misguided notion that gaining legal entry to the US is easy. In reality, it’s a bitch. Each of the several hundred legal visitors who were turned away at US airports as a result of the Executive Order had already experienced strict, nerve-wracking interrogation in order to obtain their travel documents. For refugees, as it's long been pointed out, the process is even more rigorous.

Perhaps it should be obvious, given the US’s popularity as a destination, that a US visa is not an easy thing to acquire. But if you’re a US citizen, or from of one of the countries on the US Visa Waiver Program list, you might not have considered this angle, even if you happen to be a journalist covering the story. Depending on where their travels take them, a great many people may never need to apply for a visa in their entire lives. Understanding what people go through in order to gain legal entry to the US, however, seems fundamental to understanding the level of nefarious overkill this Executive Order represents.

The US has every right to police and secure its borders, as does every sovereign country. But as Ron Nixon points out yesterday in the New York Times, there’s already a robust system of checks and vetting that legal entrants to the US undergo well before they ever touch US soil. The visa application process alone is arduous. Applicants must produce sheaves of documentation, including bank statements, police certificates, and proof of “strong ties” to the homeland such as marriage certificates and property deeds, which means that young, unmarried people are disfavoured from the start. Then there’s the extended grilling by a consular officer. Visa applications are frequently rejected, on all sorts of grounds. And it should be noted that in the event of a rejection, the US embassy does not refund the US$160 processing fee, which in many countries represents a good portion of the average income.

On arrival in the US, even a fairly uncontroversial traveler like me—a Trinidad and Tobago female citizen with a “Christian-sounding” name well past the age of the average drug mule—is occasionally subjected to odd lines of questioning by US immigration. Who did I know in the Netherlands? I was once asked while transiting through Miami on the way to Europe, as though knowing somebody in a country were a pre-requisite for traveling there. I shudder to think about the questions asked of citizens of the countries cited in the Executive Order.

The people who tried to enter the US by perfectly legal means this past weekend, and had their lives turned upside down by the Executive Order on Immigration, have every right to feel targeted and vilified. These people paid the price of entry, in both figurative and literal terms. You’d think an administration comprising a bunch of businessmen would appreciate that. But you also know why they don't.