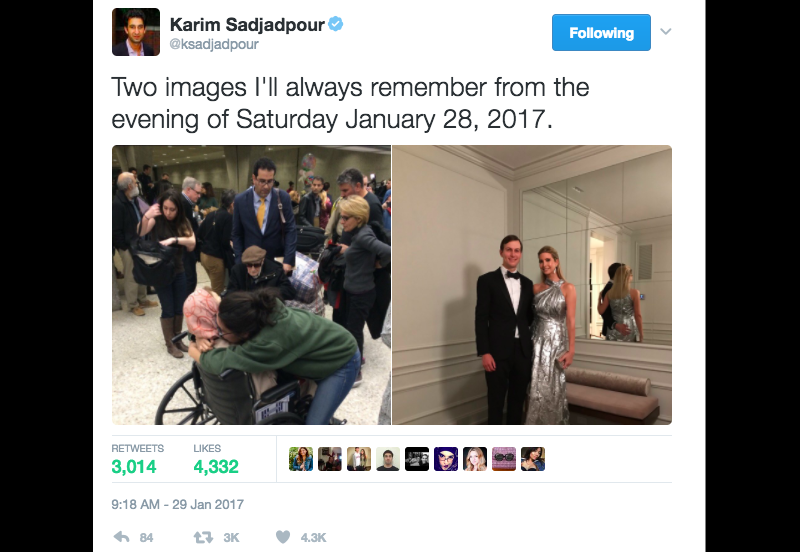 Iranian-American academic Karim Sadjadpour juxtaposes the image of elderly Iranian green card holders detained for hours in Washington, against an image of Ivanka Trump with her husband dressing up for a night out on 28 January, the day after Trump's executive order on immigration.

Panic, anxiety, worry. Messages of concern, messages of advice. It was a tough several days for a lot of Iranians, thanks to an executive order from President Donald Trump banning nationals from seven countries, including Iran, from entering the US.

It started on Wednesday, 25 January, when President Donald Trump issued executive orders to crack down on undocumented immigrants across the United States and withhold federal funding from so-called sanctuary cities that refuse to cooperate with federal immigration enforcement actions. Protests were immediate, and Iranian-Americans were among the participants.

That same day, White House documents leaked to the media indicated that there were more orders to come, including a temporary immigration ban targeting the nationals of seven countries: Syria, Iraq, Iran, Libya, Somalia, Sudan and Yemen. At that point, nothing was official, but the Iranian community was already starting to fear for the worst.

Many in the Iranian American community nervous this morning about what #Trump’s visa restrictions will do to their regular family visits.

Countless msgs from young Iranian students who live in US & are right now visiting family in #Iran or traveling. All absolutely terrified.

Outrage was starting to brew, especially as Trump's justification of the executive order, formally titled the Protecting the Nation From Foreign Terrorist Entry Into the United States,” was national security. Many observers began to point out that the ban would not have stopped any of the recent attacks that have happened in the US — the perpetrators have either been American citizens, or from countries not on the list. Others deemed it a “Muslim ban” dressed up to look like something else — Trump had called for “a total and complete shutdown of Muslims entering the United States” during the presidential campaign.

None from the 7 listed in ban.

The leaked draft ban led to many warnings that nationals of the seven listed countries who lived in the US with visas or green cards should not leave the US in case they be blocked from reentering. These fears then became reality on Friday, 27 January when Trump signed an executive order prohibiting nationals from those seven countries, Iran included, for 90 days. Although the Trump administration has since walked this portion of the order back, the ban initially included those who had valid visas or green cards.

Since he signed off on the order, the stories of deportations, airport detentions, and protests have overwhelmed news feeds and personal conversations.

My timeline is full of stories of people impacted by #Trump’s order. They are in shock & can’t believe it. #VisaBan pic.twitter.com/VfahEMi8VG

Particularly notable are the many talented graduate students who have been barred or detained upon return to their homes. One Iranian PhD student at Stony Brook Department of Linguistics, Vahideh Rasekh, was detained at New York's JFK International Airport for 24 hours. She was returning to her studies after spending winter break with her family in Iran.

Rasekhi was ordered to be deported Saturday on a plane back to Istanbul despite a federal ruling granting stay orders against the orders of the ban.

Despite the stay order Vahideh Rasekhi is being deported on an 11:40 PM flight from JFK to Istanbul. #MuslimBan https://t.co/W6Y7mq1mnV

Journalists, activists and lawyers worked diligently to get her off the plane, and she was released Sunday at 3pm.

After close to 20 hours detention in JFK, Iranian Ph.D student Vahideh is free and speaks to media. #MuslimBan pic.twitter.com/f0DBWOiFUp

Another notable case has been that of Samira Asgari who was prevented from boarding a flight to the U.S. at the Frankfurth airport. Asgari holds a doctorate from École Polytechnique Fédérale de Lausanne in Switzerland, was traveling to Boston to begin working on a tuberculosis project at a Harvard Medical School laboratory. In a statement of frustration, she asked Americans if they felt safer now that they were preventing her from starting her potentially life saving research at Harvard. Her entry to the U.S. continues to be denied.

I was pretty excited to join @soumya_boston‘s lab but denied boarding due to my Iranian nationality. Feeling safer?

Others were stuck for hours in airports waiting to be reunited with loved ones, like the case of an Iranian-American woman who was waiting overnight for her parents to be released by customs.

Stony Brook U student Shahar was just informed by Customs that her Iranian parents will remain in custody at JFK until at least tmrw morning pic.twitter.com/QsqpCNWvgX

Similar stories of Syrian, Yemeni, Sudanese refugees and immigrants being denied entry have been numerous.

Also read: More Than a Hundred Iranians, Many of Them Legal Residents, Face Challenges Entering the US