More Than a Hundred Iranians, Many of Them Legal Residents, Face Challenges Entering the US 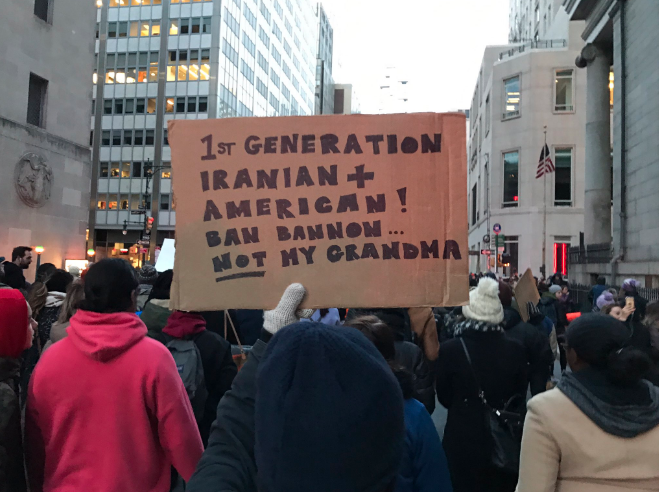 This image tweeted by the Women's March on Washington Twitter account says, “Ban Bannon… not my grandma”. Bannon is one of President Trump's top advisors, and is believed to be one of the masterminds behind the ban. He used to run the far-right Breitbart News, which he called “the platform for the alt-right” in 2016.

It is difficult to assess the scale of the impact of President Donald Trump's temporary ban targeting the nationals of seven Muslim-majority countries–Iran, Iraq, Libya, Somalia, Sudan, Syria and Yemen. But a crowdsourced database started by an Iranian MIT professor offers a frightening snapshot of the impact on Iranian nationals.

In the four days since the executive order was signed, more than a 110 Iranian US green card holders, valid student and travel visa holders, and dual-nationals of countries such as Canada, faced challenges entering the US, according to the database of entries, detentions and deportations started by Iranian MIT engineering professor Hazhir Rahmandad.

Of the more than 286 reports voluntarily filed in the database, 213 are Iranian nationals. A hundred and twelve of them faced significant challenges entering the US. Seventy-six were turned back “at the port of departure before boarding” or “after arrival in the US,” while 36 were allowed through “after significant delay/negotiation.”

If you have faced problems entering the U.S. because of the travel ban, you can report it to Rahmandad's database here.

The situation remains fluid and unpredictable for many, including whether the ban affects US green card holders or Iranian-Canadian dual nationals. Trump's immigration ban initially applied to up to 500,000 green card holders, but then the Trump administration backtracked. They made numerous contradictory statements over the weekend.

In a statement to CNN, US Homeland Security officials clarified that nationals of the seven countries who have valid green cards should be allowed entry in the US:

This is our message to them: get on a plane. Come back to the US. You will be subject to secondary screening, but everything else will be normal.

Today, the Department of Homeland Security said it would no longer completely ‘bar’ green-card holders from the banned list countries from entering, but it would be a “dispositive factor” in allowing immigrants from those countries into the US during screening.

According to the American investigative site ProPublica, Iranian and Iraqi citizens make up 50% of the 500,000 green card holders impacted by the temporary ban and the extra screening measures that come with it.

Iranian nationals targeted under the ban

Of the seven countries in the ban, Iranians are likely to be impacted significantly.

Unlike the other countries in the ban list, the US is a popular destination for Iranian students. More than 12,000 Iranians were in the US on student visas last year, according to the Institute of International Education’s Open Doors report, which tracks the demographics of international students. Last year, Iranian students in U.S. colleges and universities contributed $386 million to the US economy.

In fact, the number of visas issued to Iranians is generally much higher than the number issued to nationals of the other countries in the ban.

Nationwide protests and legal actions by the American Civil Liberties Union and volunteer immigration lawyers worked to help those detained.

Unverified reports circulated that immigration officials were boarding planes and seizing the phones and devices of visa holders to prevent them from notifying family and attorneys.

@davidakaye CBP detained me & my family for 4 hrs searched car & demanded we provide our passwords. Was later asked how much I loved America. US Citizen

Four federal courts have weighed in on the matter, ordering a stay on deportations. One federal judge in Virginia also ruled that detainees must be given access to legal counsel, but this wasn't happening in Washington's Dulles Airport.

While uncertainty prevails, many lives and families are in a state of disarray. Countless graduate programs are being missed and jobs put in jeopardy, while families remain separated.

‘An open affront against the Muslim world and the Iranian nation’

Relations between Iran and the US, which have been tense since the 1979 Islamic Revolution, had recently started to warm up under the Obama administration. The successful negotiation and implementation of the nuclear deal between Iran, the US and the so-called P5+1 countries had lifted numerous economic sanctions that had hurt the lives of ordinary Iranians.

With the news of the ban on Iranian nationals entering the US, the Iranian government was quick to act with a policy of reciprocity towards American nationals, released by the Ministry of Foreign Affairs, headed by Javad Zarif.

Full statement of the Ministry of Foreign Affairs of the Islamic Republic of Iran on the #MuslimBan. 6/7 pic.twitter.com/Y3gAxT0B8m

While respecting the American people and distinguishing between them and the hostile policies of the US government, Iran will implement the principle of reciprocity until the offensive US limitations against Iranian nationals are lifted. The restrictions against travel by Muslims to America… are an open affront against the Muslim world and the Iranian nation in particular and will be known as a great gift to extremists.

The foreign minister did say Iran would continue to accept all valid visas, contrary to what played out over the weekend and continues to play out in some places in the US.

Unlike the U.S., our decision is not retroactive. All with valid Iranian visa will be gladly welcomed. #MuslimBan 7/7

Despite this, two Americans, Joseph Jones and J.P. Prince, who play professional basketball in Iran's Super Leagues at the Azad University of Tehran, are currently prevented from returning to Iran after a team-funded vacation in Dubai.