Melania Trump Returns Gloriously to Her Homeland, Now as a Meme

The bilingual meme above makes little sense to people outside the former Yugoslavia, part of which composed what is known today as Slovenia, the birthplace of Melania Trump, the current first lady of the United States. Show the meme above to anybody from what used to be Yugoslavia, however, and you're bound to get at least a chuckle.

Just ask Aleksej Demjanski, a scholar now living in Texas, originally from Skopje. On Jan. 24, he tweeted the image you see above, and raked in more than 170 retweets and 700 likes.

So what's so funny? The captions are a wildly translated mashup of lyrics from an old song, and the joke only makes sense if you have some fluency in English and Serbian, Croatian, or Bosnian:

My eyes are [like the] Adriatic Sea
My hair is [like the] wheat of Pannonia
[i.e. the plains of Vojvodina, often called the granary of Yugoslavia]

Hearing these lyrics, nearly anybody born in Yugoslavia before 1985 would be able to complete the chorus:

My heart is the Slavic soul
I am a Yugoslav girl!

The song “Jugoslovenka” (“Yugoslav Girl”) belongs to the country's most popular folk star, Lepa Brena. The song was released in 1989, two years before the dissolution of Yugoslavia, and remains a vital thread in Yugo-nostalgia. 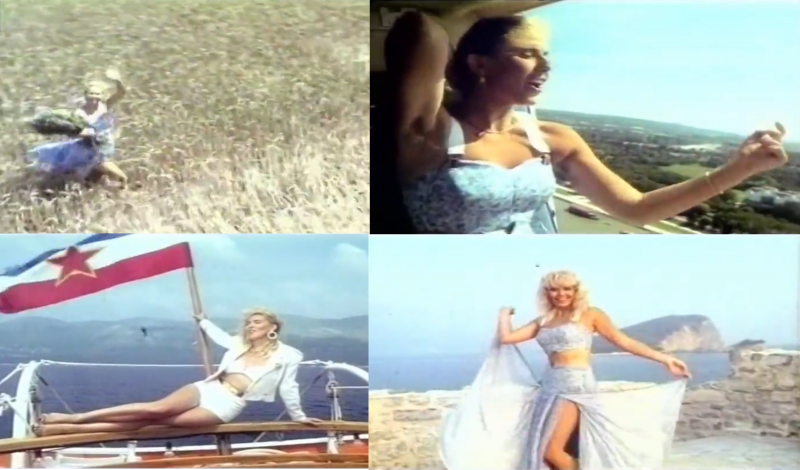 The song's big-budget music video, which includes aerial footage filmed above the Adriatic Sea and wavy “seas” of wheat, was recorded during the making of the musical comedy film series “Let's Fall in Love,” which were made in the tradition of the Elvis Presley movie “Viva Las Vegas.”

The original song symbolically featured three diverse heartthrobs of the era: Montenegrin Daniel Popović, Croatian Vlado Kalember, and Bosnian Alen Islamović. The song's structure is reminiscent of South Slavic epic poetry in a form of serial dialogue, with male singers asking the woman, “Where do you come from, oh beautiful girl…?”

Dropping Melania Trump into the lyrics of this song could indicate that some in the region are warming up to the woman now married to the 45th president of the United States.

[Image text: “When they play “I am a Yugoslaaaav Girl!” on your parade]
She wore a light blue to fit with the lyric “My eyes are Adriatic Sea”!

Janeski was not the only one. Humor portal Panika.be published a satirical video of Mr. and Mrs. Trump dancing to the song at the inaugural ball as part of a parody story.

In the former Yugoslavia, there's even an expression often used to describe the people who “make it” abroad (especially those to emigrate and find success in the West): “a leaf from our forest” (“naše gore list” in S/C/B).

Unlike people living in other Communist countries, Yugoslavs belonged to a non-aligned country not behind the Iron Curtain, and they could travel abroad for work. Yugoslavs who accomplished things in this manner were often celebrated as proof that Yugoslav society had something to offer the world.

However, some Slovenian Internet users refuse to accept associations with Yugoslavia. One of them posted an image featuring the U.S. first lady and the ski jumper Domen Prevc, another Slovenian who's successful abroad, and a rhyme dissing the whole concept of Yugo-nostalgia.

[Image: Whoever dreams of Yugoslavia,
must have an empty skull.
It's a prestige to be a Slovenian,
as Melania and Prevc know.]
Hold on, for sure, @MelaniaTrump @PrevcDomen.

During the U.S. presidential campaign, the Slovenian media didn't show great interest in Mrs. Trump. That changed, however, after Donald Trump's surprising victory in the Electoral College, and since then some Slovenian business people have tried to capitalize on Melania Trump's name and brand — often without her permission.

At least Melania's hometown in Slovenia is making a good profit on her behalf. A bakery is selling these. #Slovenia #MelaniaFirstLady pic.twitter.com/RHqWgdQcwI

The phrase on the flag “Prva dama” means “First Lady.”

Just as litigious as her husband, Mrs. Trump has already filed lawsuits through her Slovenian lawyers against groups using her image and name without permission. If you're thinking of slapping a photo of Melania Trump on your new honey, lingerie, or whatever — beware.