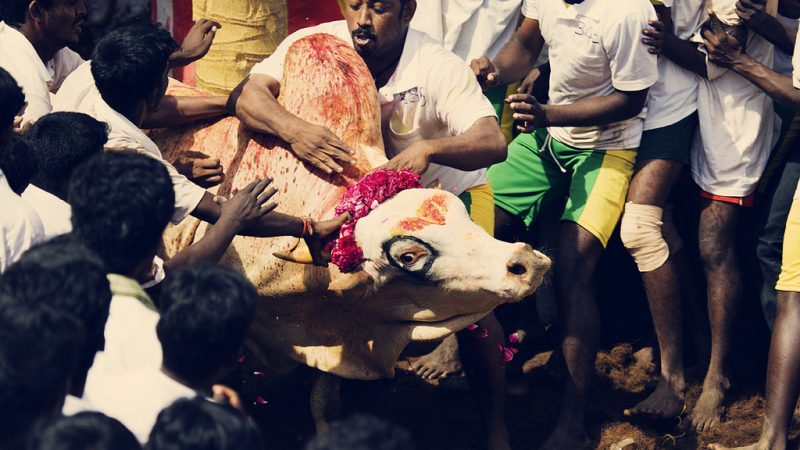 Man versus bull – the Jallikattu sport. Image from Flickr by Vinoth Chandar. CC BY 2.0

The South Indian state of Tamil Nadu was the center of protests hundreds of thousands of people strong after the Indian Supreme Court turned down a plea on January 12 to withdraw the ban on Jallikattu, a form of traditional bullfight. The decision came two days before the start of the Pongal Festival, a Hindu thanksgiving to nature, where Jallikattu would have taken place if allowed.

Soon, people who objected to the court's decision gathered in the state capital Chennai chanting slogans like “We want Jallikattu.” The movement spread to other parts of Tamil Nadu including Madurai, Erode, Salem and Coimbatore.

By January 18, young people from all walks of life, including many women, took to the streets in large numbers and occupied the Marina Beach in Chennai. After the Tamil Nadu government passed a resolution on January 23 that supposedly would allow Jallikattu once more, organizers called off further protests — but not before police cleared the site amid allegations of brutality.

To many protesters, who worked together across caste and religious divides, defending Jallikattu also meant defending local culture and community against standards dictated to them by cultural elites in Delhi or Mumbai. Some media even compared the protest to the 2011 Tahrir Square protests of Cairo.

.#jallikattu is part of TAMIL & Sanatan culture. It is a centuries-old tradition and NO court in WORLD can stop it

The ban on Jallikattu

Jallikattu is an ancient sport, and is known in Tamil as eru thazhuvuthal (bull embracing). It entails multiple people attempting to grab the large hump of a Bos indicus bull released into a crowd of people. The challenge is to hang on to the hump with both arms while the bull tries to escape. Participants hold the hump for as long as possible, attempting to bring the bull to a stop and remove flags on the bull's horns.

The sport dates back to the Tamil classical period (400-100 BC) and generally does not harm the bull, unlike bullfighting in other cultures which end with the animal being sacrificed. In fact, one of the rules of Jallikattu is that no contestant should hit or hurt the bull in any manner.

On May 17, 2014 a Supreme Court Bench banned the Jallikattu bull fights following a petition brought forth by the Animal Welfare Board of India (AWBI) and the US animal rights organization PETA. The petitioners alleged that the bulls involved in Jallikattu are physically and mentally tortured for human pleasure and enjoyment. 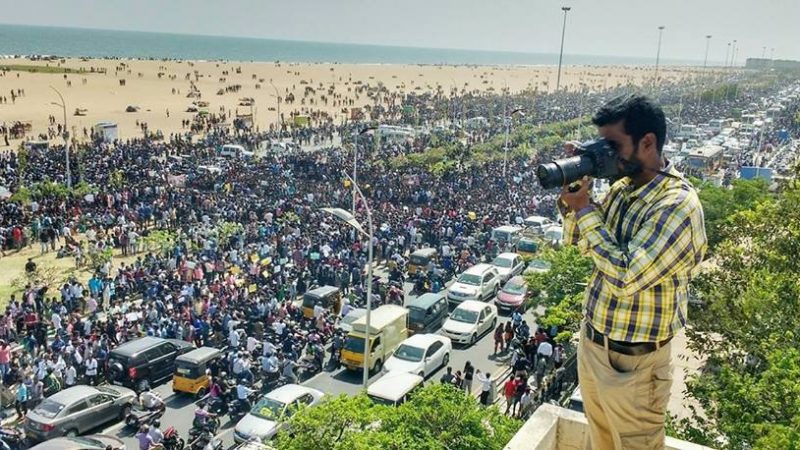 By January 19, the Marina beach was swarming with people. Photo by Bala G. Used with permission.

How the protests began

Ahead of the court's refusal to reverse the ban, several groups, organized primarily via social media, came together for a candle-light protest on January 8 at the Marina beach in Chennai calling for the sport to be allowed again and for PETA to be banned from India. The event was a huge success.

After the court's decision, on January 16, villagers of Alanganallur in Madurai protested at the famous ‘Vaadi vaasal’ arena in favor of Jallikattu. At the end of the day, police briefly detained around 200 protesters.

The following day, as the news spread about the arrests, young people flocked in large numbers to Marina Beach in support of those arrested in Madurai. Protesters staying overnight lighted their mobile phones in the dark when the authorities switched off the street lights to pressure participants to disperse.

Eyewitnesses say that the protests were peaceful, involving a lot of dancing and singing. Significantly, women and kids reportedly felt safe in the midst of hundreds of people.

The protests got a lot of public support and ordinary people packed and distributed food and offered mobile charging services for participants staying at the Marina beach of Chennai. 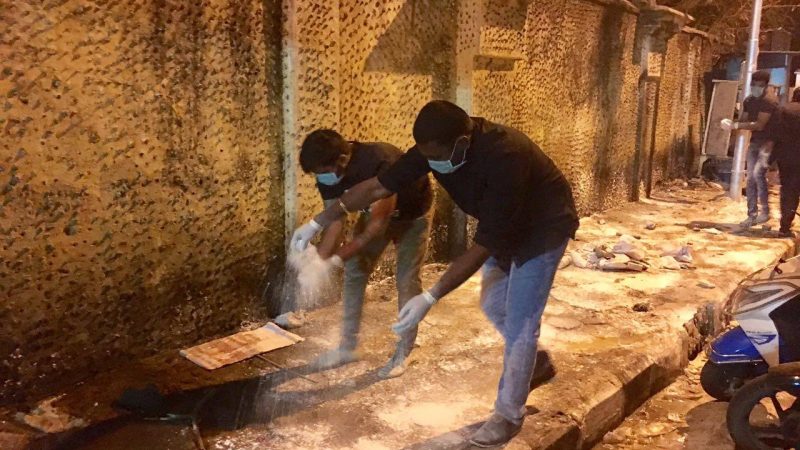 People also volunteered to clean the area to remove the stench of urine as there was not enough toilets for that many people.

Celebrities like music director A. R. Rahman extended support to the protest:

I'm fasting tomorrow to support the spirit of
Tamilnadu!

One writer returned an award back to the government in protest.

The event created some wonderful moments:

The protest was reaching its peak by January 21:

Under pressure, Tamil Nadu Chief Minister O. Paneerselvam met with Indian Prime Minister Narendra Modi and pushed for the central government's approval for an ordinance that will bypass the court order and allow Jallikattu. On January 20, the chief minister of Tamil Nadu announced that a law has been drafted and sent to the central government. On January 21, the protests still continued, demanding a permanent solution.

Thanks to @narendramodi ji for your support and assistance in enabling #Jallikattu to be held in TamilNadu. pic.twitter.com/CEAvU4zK5q 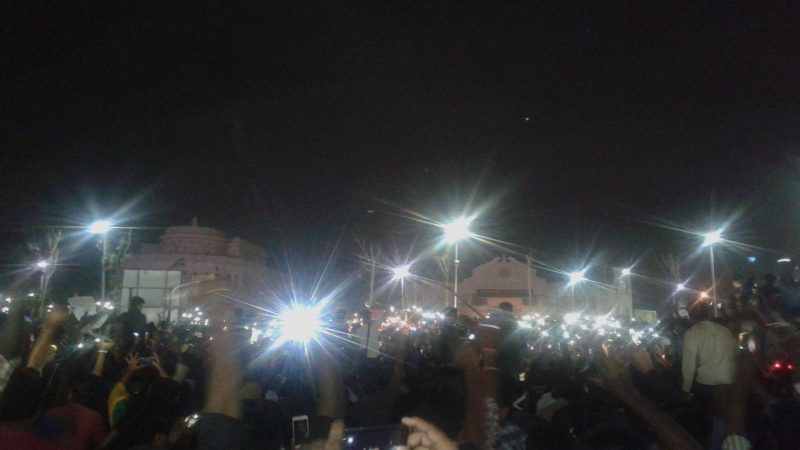 ‘A single agenda of turning the narrative against the protesters’

Even after the commitment of the legislation, the protesters were refusing to budge. On January 23, police began forceful evictions of Marina Beach early in the morning. Protesters threatened to venture into the sea, but eventually most were removed and access to the protest site was cut off.

Social worker Vasuki Umanath interviewed eyewitnesses who claimed that besides using force on the protesters, the police also hit people who helped the protesters or bystanders. Videos allegedly showing police setting fire on vehicles or being involved in arson also went viral on social media.

Disheartening to see these visuals!
Are they the same people who we praised during #Jayalalithaa‘s funeral?#Jallikattu #Police #Marina pic.twitter.com/ly8yB0VS2F

While everything was going as well as possible, Police under directions of their political bosses, came off early in the morning to abruptly scuttle off the protesters. Denying any additional time to stay on, they used forced and lathi charge.

Police and ruling class apparently had a single agenda of turning the narrative against the protesters. From what we get to see, they went about their agenda with vengeance by initiating arson of autos, vandalism on vehicles which was done by police themselves as captured in cell phone videos of onlookers.

Continuing on the rampage, Police brutally attacked those who rushed to the rescue of the people struck in the beach, resulting in some of the provoked people pelting stones at the police, which makes government version of narrative across the mass media.

On January 23 in the evening, a resolution was finally passed by the Tamil Nadu government that supposedly would allow Jallikattu. The next day, the majority of the protesters in Chennai decided to call off their demonstration after a dialogue with police and a district court judge. However, they promised to restart it if there was no permanent solution for Jallikattu by February 1.

‘It is just not about bullfight or its ban’

The legal situation surrounding Jallikattu is still unclear to many. The Tamil Nadu government is claiming that the passed ordinance is a “permanent solution” but many Jallikattu supporters deem it as merely being a “stop gap measure”.

Poet and filmmaker Leena Manimekalai, who joined the protests, wrote on online portal The News Minute:

When I personally witnessed the protest that is now being described as #ThaiPuratchi and #TamilSpring, I realised that it is just not about bullfight or its ban. It is just a signifier. When someone says #IdoJallikkattu, it means she or he does resistance. […]

Jallikkattu is just the mascot for all the pent-up rage in people’s minds. […] People finally have become bulls to reaffirm their self-respect, determination and identity.

The Jallikattu protests show that against the cosmo-liberal stereotype of “Indian young people”, there are young people, millions of them, to whom roots matter, identity matters, culture matters and they do not aspire to lose their Tamil-ness to make the cut in the Delhi-Mumbai idea of Indianness.

And former judge of the Supreme Court Markandey Katju wrote on Facebook:

The victory of the Jallikattu agitation shows that when hundreds of thousands of people rise unitedly like a typhoon or tornado it becomes a force so powerful and so swift that no power on earth can resist it. […]

The significance of the Jallikattu agitation is that it cut through caste and religious barriers. In fact it even cut through the the national border as Indians in many parts of the world supported it.

Thus the victory of the Tamil people is a victory for all Indians. It has shown that we Indians can unite, as we must, if we are to solve our massive problems.