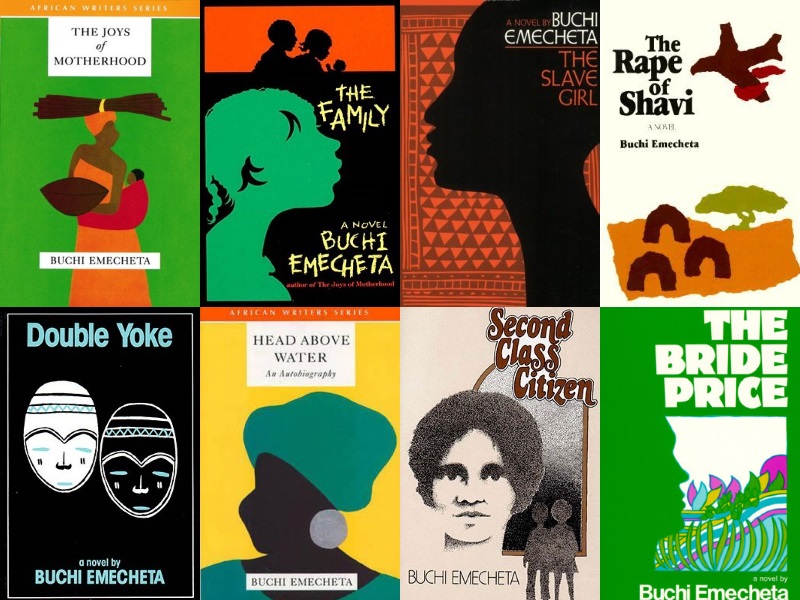 A compilation of covers of novels by Buchi Emecheta and printed by publishers George Braziller Inc. and Heinemann Educational Books.

Florence Onyebuchi (Buchi) Emecheta, who blazed a trail as a women novelist, died on January 25, 2016 in London, UK. She was born 72 years ago in Lagos, Nigeria.

Emecheta was a ground-breaking author because she was one of the first female writers to engage post-colonial Africa with literature. At the time of the publication of her first novel, In the Ditch (1972), the literary space in Nigeria and the rest of Africa was dominated by male authors. She also suffered an unhappy marriage. Her husband did not support her writings, and he burnt her first manuscript. Emecheta left him in 1966 and continued to work and write, all the while raising her children. She went on to study sociology at the University of London, and graduated in 1972 with a bachelor's degree.

Because Buchi Emecheta will never be forgotten ❤❤ pic.twitter.com/X5W73IeS0o

Emecheta was made an Officer of the British Empire (OBE) in 2005 in recognition of her work. According to Benecia L. Williams at Emory University, Emecheta 20 novels dealt:

primarily with the portrayal of the African woman. The main characters of her novels show what it means to be a woman and a mother in Nigerian society. Emecheta looks at how sexuality and the ability to bear children can sometimes be the terms only used to define femininity and womanhood. She is interested in how gender intersects and engages with education, poverty and enslavement.

Since the news of Emecheta's death broke, tributes have been pouring in from all over the world. Bernardine Evaristo in a tribute published in the Guardian described her as one of those authors who “who drew on her own experience to write groundbreaking fiction”:

…[the] so-called ‘Renaissance generation,’ those Africans who came of age at the same time as their countries. She and other writers all over the continent had both the challenge and the joy that comes with being first, of writing Africa and Africans into literary existence. They embraced the task.

Dr Nnedi Okorafor, an award-winning Nigerian-American author, told the BBC that Emecheta “was the reason she started writing.” 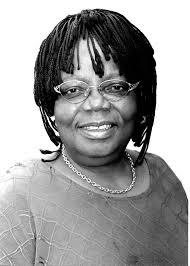 On Facebook, Ezeada Ezenwa couldn't believe that Emecheta is dead. “How can she die when I have not met her and told her all the things she means to me?”

How can she depart when I haven't told her how reading The Slave Girl at eight made me want to build worlds with stories, just like Buchi and fall in love with Ibuzo, just as she told me to. How can she join her ancestors when I haven't berated her for letting Akunna die, for the tears I shed for her, my heart breaking even though my head said she's just a product of ink and paper. Or how I struggled with a rage I couldn't have understood when Francis burnt Ada's manuscript, I was only eleven and had never written a book but I knew it had to be one of the most fucked up things a man can do. And when a certain brilliant, handsome man ‘jokingly” told me he'd break my laptop if I let my writing get in the way of giving him attention, I grabbed my bag and hailed a cab. His number is still blocked and he's given up trying to reach me
Buchi, I haven't told you how you and your stories have shaped the woman I have become and this writing that is more frustrated perspiration than flights of inspiration.
Perhaps you think I am selfish, thinking only of myself and the loss of a dream I have had since I was eight, but Buchi I do not care. Tomorrow I will wish you a safe voyage to the place where having a vagina does not make you a second class citizen, but tonight, I will revel in rage.
Rest in Peace Buchi Emecheta.

Charles Onyango-Obbo, the publisher of Africapedia, was full of admiration for Emecheta, who did not allow her personal travails to deter her:

The Joys of Motherhood was a masterpiece. Rest in peace Buchi Emecheta. pic.twitter.com/vE0iyoLj6L

Perhaps Emecheta’s grandest legacy was making us realise that feminism isn’t alien to Africa. She clearly defined African feminism as one that is different from that of the West. “African feminism is free of the shackles of Western romantic illusions and tends to be much more pragmatic,” she once said. “Working and achieving to great heights is nothing new to the woman of Africa… An African woman has always been a woman who achieves.” This definition of feminism recurs in her books; it is evident in the lives of Nnu Ego and Adah Ofili. Through Emecheta’s works, we are challenged to think about gender inequality from within (and by ourselves as Africans) and not swallow the West’s idea of it, for every society is different in its own way.