The Difficult Work of Building an Inclusive, Women-Led Coalition to Resist Trump 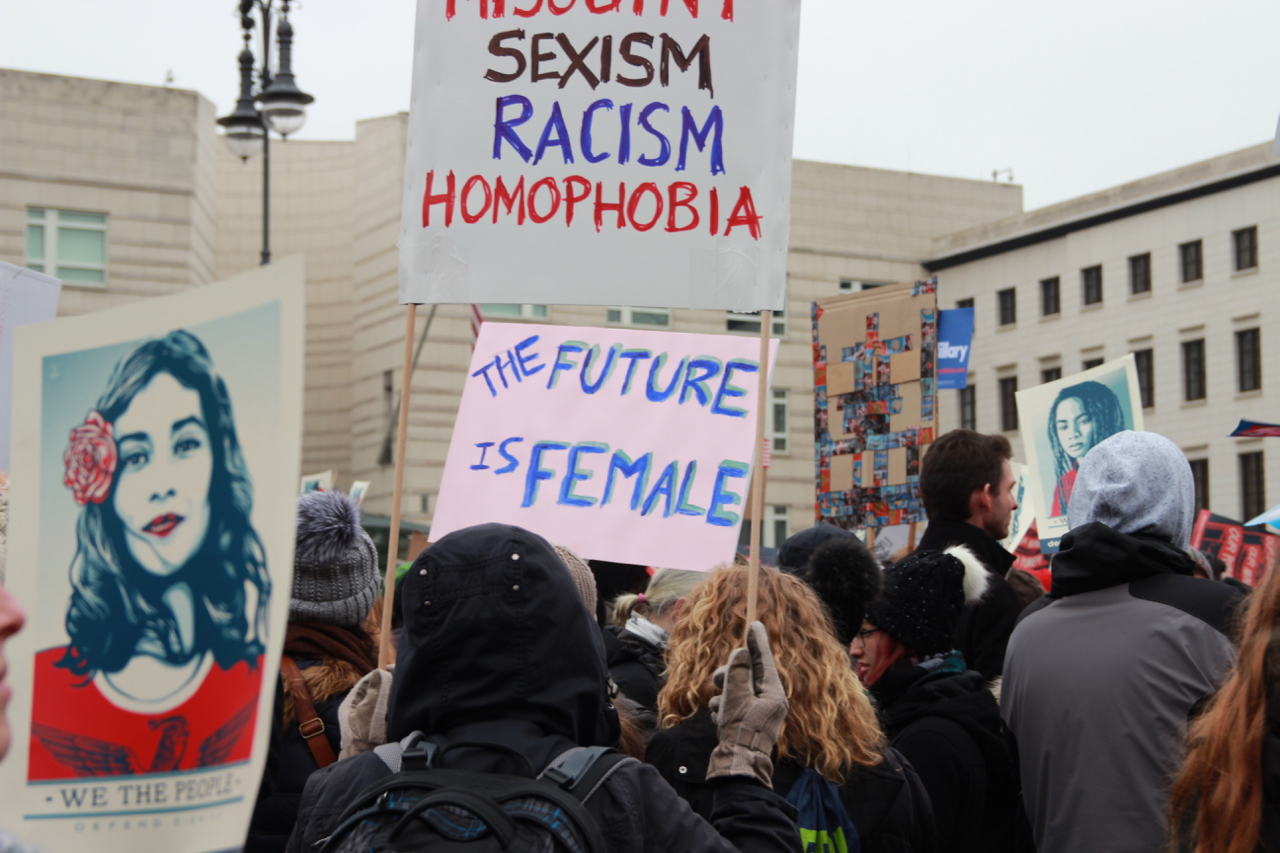 The Women’s March on Washington brought together more than half a million women and allies to the United States capital on Jan. 21 in defense of women’s rights and in response to Donald Trump's inauguration as U.S. president. The movement inspired hundreds of “sister marches” all over the world, including one in Los Angeles that attracted at least 650,000 people.

The march’s unifying principles included ending violence and supporting reproductive rights, the rights of workers, people with disabilities, and sexual and gender minorities, civil rights, freedom of religion, immigration, and environmental justice. Its message was meant to challenge a presidential election marked by racism, Islamophobia, and sexism, as well as other hateful rhetoric.

Almost as soon as Trump won the U.S. Electoral College, the idea for the Women's March started taking shape. On Nov. 9, 2016, the day after the election, a woman named Teresa Shook created a Facebook event and invited people to march on Washington to protest Trump’s election. Other women created similar events, gradually deciding to consolidate their efforts for the Women’s March on Washington.

Eventually, the head of campaign operations brought on African-American civil rights leader Tamika D. Mallory, Mexican-American activist Carmen Perez, and Muslim Palestinian-American activist Linda Sarsour to serve as co-chairs. This effort was to ensure that the march included women of color—a U.S. term commonly used to represent non-white women in the context of resistance to systemic racism and exclusion—in its leadership.

National co-chair Carmen Perez is the executive director of The Gathering for Justice, a New-York-based organization that seeks to end child incarceration and racial inequalities in the local criminal justice system. Perez is a longtime activist and graduate from UC Santa Cruz who founded youth-of-color organizations like R.E.A.L. (Reforming Education, Advocating for Leadership) and The Girls Task Force.

We will always STAND TOGETHER because our liberation is bound in one anothers! #IMarchWithLinda #Sisterhood #WomensMarch pic.twitter.com/BL6ptNY4Qh

A Chicana born in Oxnard, a small town in Southern California, Perez recently spoke with the Latinx website Mitu and explained her reasons for getting involved in the march:

I felt a responsibility to my community, particularly being Mexican-American, my mother being from Mexico and my father being from California and Chicano. This president used racist rhetoric targeting my community. I felt it important to be front and center of this march.

When speaking about her hopes for the march, Perez added:

I want it to reflect that when women come together in solidarity we can actually create opportunities for other women and also make sure that we are intentional and intersectional about the issues that we care about.

While many have recognized the women of color in the march's leadership, reactions to the march from women of color and the lesbian, gay, bisexual, transgender, queer, intersex and asexual (LGBTQIA) community reflect disagreements about what some perceive as a predominately white feminist movement.

Ahead of the march, writers and activists of color published articles criticizing the movement's lack of accountability for historic violence against women of color. Because of the initial absence of women of color in the march's leadership, concerns that the original name, “The Million Women March,” tried to coopt a protest organized by black women against racist and sexist oppression in 1997, and the perceived lack of anti-racist critiques coming from participants, many women of color skipped the Jan. 21 march on Washington.

The trans community also made important critiques. Many participants at the marches wore pink “pussy hats” and held up signs in defense of their vaginas and reproductive organs. Transwomen have argued that centering vaginas as symbols of womanhood is transphobic. They have called on heterosexual women to make their struggle for reproductive rights more inclusive. The use of ovaries and the uterus as symbols of protest harks back to the reproductive rights movement, and the use of the “pussy” in the women's marches was also a response to comments Trump made about his aggressive sexual tactics with women: “Grab ’em by the pussy. You can do anything.” Trump was filmed when he made these derogatory remarks to a television personality in the US while on the set of a show, but they were publicly revealed in October 2016 when he was campaigning.

Nevertheless, a commitment to intersectional feminism — the concept that women are often members of other marginalized groups, creating experiences that also influence their lives — was evident among many of the people who joined the women's marches this month.

Under the #WhyIMarch hashtag, many women and members of the LGBTQIA community shared their reasons for participating. From reassuring their commitment to self-defense and protecting reproductive health rights to defending gay marriage, hundreds of women of color wrote on social media about why they demonstrated:

Can I live? #WhyIMarch #BlackLivesMatter pic.twitter.com/F3IVhPTeyI

#whyIMarch because immigrants are here to stay and they are what make this country great. #WomansMarch pic.twitter.com/cdAZgM4kBB

So my wife and I can stay married. #whyimarch #womensmarchwashington #equality #LGBTQ pic.twitter.com/BPWNlZSJm5

For many women of color, whether or not they marched on Jan. 21, the xenophobia and racism playing out on social media and in the Trump administration's early policies are a clarion call to activism.

Just hours after the Women’s March on Washington, Linda Sarsour, a national co-chair of the march, was accused online of having ties to Hamas, which is considered a terrorist organization by the U.S., the European Union, Israel and several other countries. Before long, #IMarchWithLinda started trending on social media, as hundreds of women and organizations shared their support for the activist.

In her speech on the day of the march, aired on ABC News, Sarsour addressed the need to face the future with courage and commitment to broader solidarity among women:

Fear is a choice, we are the majority, we are the conscious of these United States of America, we are your moral compass. If you want to know if you are going the right way follow women of color, brothers and sisters. We know where we need to go and we know where justice is.

In just his first few days in office, President Trump demonstrated his commitment to promises he made about restricting access to abortions and other reproductive health services. On Jan. 23, like every Republican president since Ronald Reagan in 1984, Trump enacted the so-called Mexico City Policy, also known as the Global Gag Rule.

The Global Gag Rule bars international health organizations that receive U.S. funding from mentioning abortion as a family planning option. According to some experts, this policy actually raises the number of unsafe abortions performed, leaving women with less access to reproductive health resources.

Back at home in the United States, Planned Parenthood, a prominent non-profit reproductive health organization, could find itself in trouble if Republican politicians who oppose abortion have their way. Vice President Mike Pence promised to defund Planned Parenthood by pushing legislation that blocks low-income patients who receive public healthcare from accessing the organization’s health services. According to “I Stand With Planned Parenthood,” defunding these services and eventually shutting down the health centers would hurt poor people of color the most, depriving these groups of access to cancer screenings, birth control, STD testing, and other treatments, including HIV tests— some of the many services Planned Parenthood provides beyond abortion.

For the organizers of Women’s March on Washington, coalition building was just as important as staging a successful march. To manage the long aftermath, the march's organizers launched the 10 Actions/100 days campaign, which encourages participants to continue their activism.

The first thing members of the public are encouraged to do is write a postcard to their senators about the issues that matter most and how they plan to continue fighting under a Trump administration.

While there are still disagreements about the Women's March, many women of color and members of the LGBTQIA community seem to agree that it's essential to push back against the Trump administration's policies.

At the rally in Washington last Saturday, scholar and counter-culture icon Angela Davis echoed this call for feminist resistance against Trump: