Could Trump Solve Trinidad & Tobago's US Tax Law Stalemate? The Opposition Leader Seems to Hope So. 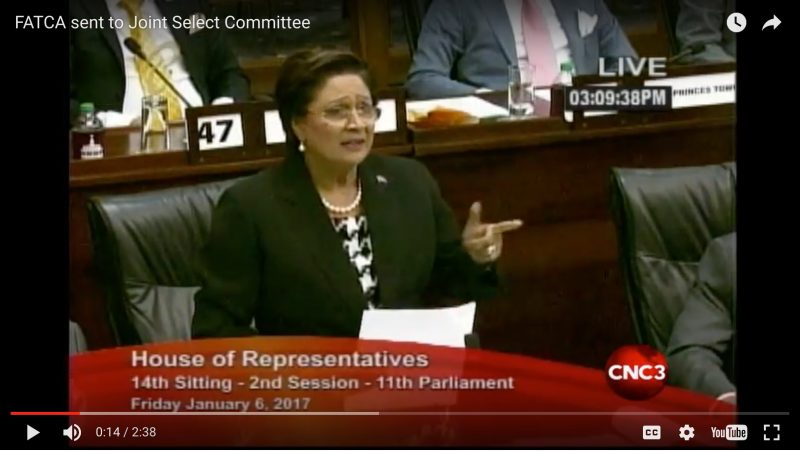 Opposition Leader Kamla Persad-Bissessar has the floor in this screengrab of a CNC3 news story about the FATCA legislation in Trinidad and Tobago being sent to a parliamentary Joint Select Committee for discussion.

The Foreign Account Tax Compliance Act (FATCA), which was enacted by the US Congress in 2010, seeks to ensure that US citizens and residents with financial assets outside of the country are paying taxes. Regarded as an invasive law, there has been some resistance to it; however, many countries have signed on — but Trinidad and Tobago is not yet one of them.

There was great online discontent when the country missed its September 30, 2016 deadline, thanks to the opposition stalling the legislation's passage in parliament. At the time, opposition leader Kamla Persad-Bissessar explained that she and her colleagues were concerned about “the draconian provisions in the Bill”. The government maintained that they addressed these concerns, but since the opposition walked out of parliament — a move they deemed deliberate — the matter was never debated.

The public response was one of frustration, especially since the opposition were the ones that introduced the legislation to parliament when they were in government. In a country where corruption is endemic, FATCA, netizens believed, could help ensure transparency in financial transactions. Business owners wanted to be able to trade with the United States free of any impediments and the banking sector was heavily lobbying for the country's compliance.

December 31, 2016 — another critical date in the FATCA compliance process — also came and went. On January 20, 2017, a Joint Select Committee met to discuss the issue, causing bankers to express optimism that the country would meet its February 3 reporting deadline.

On January 25, however, it came to light that the leader of the opposition did a curious thing: she wrote to Donald Trump — while he was still president-elect — and asked whether his administration plans to do away with FATCA. The 2016 Republican platform included language calling for FATCA’s repeal, so it isn't so far-fetched to think Trump might support such a move if the Republican-controlled Congress pushes it through.

However, social media went ballistic, criticizing her for unilaterally reaching out to a foreign leader before he had even come to power. Facebook user Abeo Jackson, who posted images of the signed letter, ranted:

No this….no she did not. No. Nooooo. This wench did not. Listen to meeeeee
Edit: Pls note this letter was written to Trump while Obama was STILL in office!!! What the…..
What it is dey fraid so?! A bill THEY originally introduced to the parliment. #iswhatnameprotocol

The letter was widely circulated and commented on, although some netizens found themselves “speechless”. Facebook user Stefan De Gale questioned the opposition's motives:

So wait tanty real jump out here.
1. U as prime minister draft a bill
2. U lose the election
3. Same bill is brought by new government
4. You withhold support and ask for a JSC [Joint Select Committee]
5. You get JSC
…….and write dis?
Listen give me a break eh

There was much discussion on Facebook about the opposition leader overstepping the mark. Rhoda Bharath quipped:

A post on the website TriniTuner speculated — in full dialect — about Persad-Bissessar's reasons for writing the letter:

‘Trumpy Oye.. Yuh think yuh could geh we a bligh on dis FATCA ting? We party financiers cyar find no where else to hide money…’

‘Hey, Trump…do you think you could give us a break on this FATCA thing? Our party financiers can't find anywhere else to hide money…’

Two of the opposition's financiers are wanted for extradition by the United States in connection with corruption and money laundering charges. Transparency International's 2016 Corruption Perception Index saw Trinidad and Tobago fall from its position of #72 the year before to #101, pointing at citizens’ distrust of its politicians and systems. As it stands, the FATCA legislation gives US banks the power to withhold as much as 30% of payments made to foreign financial institutions that do not agree to release information on their customers who have US accounts. Non-compliance — assuming FATCA remains in place under the Trump administration — could therefore further compromise Trinidad and Tobago's already sluggish economy. As of this writing, there has been no formal response from The White House.