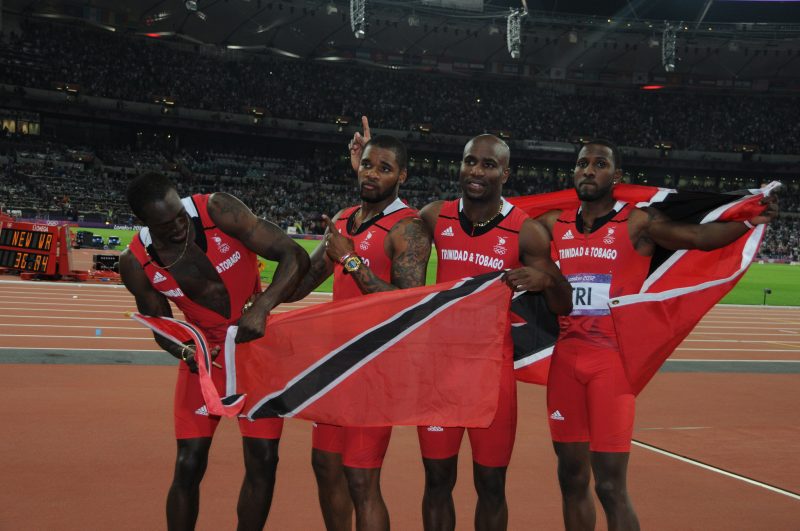 Trinidad and Tobago's track and field relay team will soon have another gold medal — nearly nine years after they ran the race.

The stunning news that Nesta Carter — part of the four-man relay team that powered through to win gold in the 4x100m event at the in Beijing 2008 Olympics — tested positive [2] for a banned substance, will result in Jamaica being stripped of its top spot, and second-place finisher Trinidad and Tobago being awarded the gold instead. In dominoes style, Japan will now be given the silver medal in that event and Brazil will take the bronze.

Satirical sports and politics website Wired868 took up the baton early on, saying [3]:

It started off as a sprint but ended up as a marathon. On 22 August 2008, eight nations and 32 athletes contested the men’s 4×100 metre final in Beijing, China.

And, on 25 January 2017, Mr Live Wire can now reveal the impending result.

The winner, with an amazing time of eight years, six months, three days and 38.06 seconds… Trinidad and Tobago! Bawh!

On Facebook, the Late O'Clock news chimed in [4] with a clever caption: 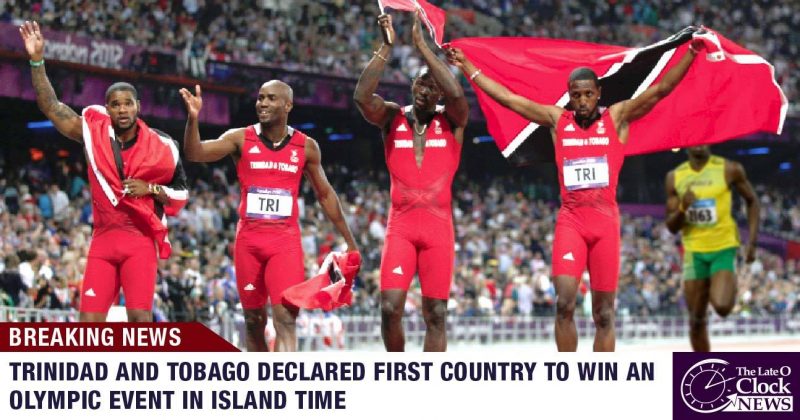 It is therefore premature of the TTOC to speculate on any upgrading of the Trinidad and Tobago Beijing 2008 Olympic Games Men’s 4 x 100m Relay Team medals from Silver to Gold. The IOC has its protocols and procedures in respect of medal upgrades. […]

It is always a disappointing and an unfortunate situation when an athlete from any country is embroiled in such a situation and, more so a Caribbean athlete.

The IOC soon released the full decision [7] on its website, which made it clear [8] that “the Jamaican team is disqualified; […] the corresponding medals, medallist pins and diplomas are withdrawn and shall be returned; [and] the IAAF [International Association of Athletics Federations] [9] is requested to modify the results of the above-mentioned event accordingly and to consider any further action within its own competence”.

After that, Trinidad's Richard Thompson publicly spoke about [10] the issue on behalf of his teammates:

A few months ago we got the news that we may be upgraded, and this morning we woke up to messages confirming that we are now, in fact Olympic Gold medalists. Every athlete works hard to cross the line first, every athlete strives to stand at the top of the podium and hear their anthem play and we all want to come back home to the fanfare but unfortunately, this is not our fairytale story.

However, […] we still hold our Jamaican brothers in high regard and cannot/will not judge your unfortunate circumstances for we do not know the intricate details of what transpired.

Thompson also took the opportunity to call out [10] broken promises made to the team after a similar situation happened after the 2012 London Olympics, when their medals were upgraded to silver:

There was a function held for us by the president, […] then there was a follow up convo that we had with [sports] Minister Smith regarding retroactive financial compensation.

We were promised in July that something would be done to assure that we were rewarded for our efforts and representing T&T with integrity. There were media releases and pictures taken… and then nothing! […]

To make matters worse, in trying to prepare for the Rio Olympics, we endured an immense struggle to receive elite funding, which was intended to assist us with our Olympic preparation. To this date, I still have not received funding despite several attempts to coordinate with the minister, his assistant and the ministry officials.

I mention many of the things above—not to sound bitter or ungrateful for some of the luxuries afforded to us in the past—but to illustrate to the people, the obstacles that we face in order to perform against the best in the world.

While Trinbagonians were happy for the team and sensitive to its struggles, they were also genuinely disappointed for the Jamaican athletes who were negatively affected by Carter's rule breaking — particularly Usain Bolt [11], who is revered across the region. Facebook user Leslie-Ann Boiselle explained [12]:

There are opposing views on the issue, one of which that it's not fair that Usain Bolt should lose his medal because of what someone else did.

People this is a team event – when one goes down they all go down. That's just the way the cookie crumbles. You agree to abide by the rules when you chose to participate.

I'm sorry but I for one am not going to support rewarding wrong behavior. It is a pity that the other Jamaican team members have become collateral damage.

But our empathy for the Jamaican team should not cloud or outweigh our obligation to support doing what is right.[…]

Bolt's achievements have been recorded in the annals of athletics and no one can take that away.

Rather than lament for the Jamaican team, I prefer to focus all my energy on lauding my Trinbagonian athletes who ran a ‘clean’ race.