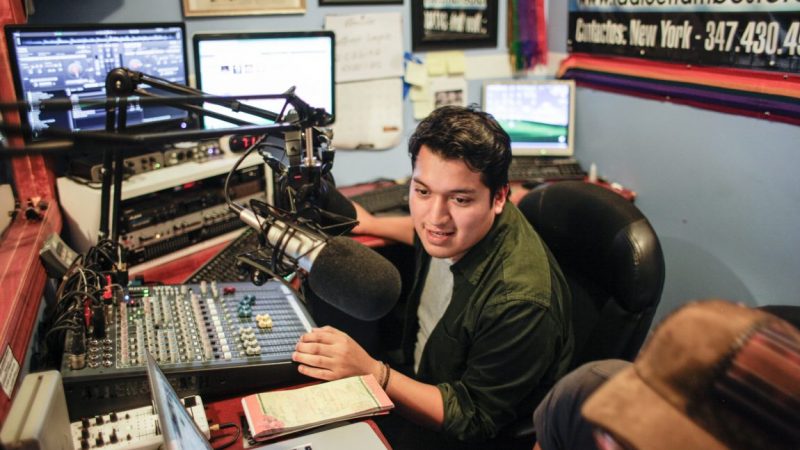 The following is a re-edited excerpt of a full article written by the author for Remezcla, and it can be read here.

Not far from South Bronx corner bodegas, street vendors, and the Yankee Stadium, stands an unremarkable tan apartment building. You wouldn’t know it from the outside, but in its weathered basement, is a radio studio and haven for New York City’s indigenous Ecuadorian Kichwas, a community of an estimated 10,000. In contrast to the Spanish, English, and even Spanglish spoken above ground, the ancestral language Kichwa fills the studio in the form of lyrics, poems, and debates.

Founded in 2014, Kichwa Hatari is the first radio show in the country to broadcast in Kichwa, a regional variant of Quechua and the language of the indigenous Ecuadorian Kichwas. Starting in the 1990s, indigenous communities from Ecuador have migrated to the United States, particularly to New York City and other urban centers, to escape an economic recession back home that has hit indigenous peoples the hardest. But despite their sizable population, Kichwas are often rendered invisible among Ecuadorians and the larger Latino population.

Kichwa Hatari, which translates to “raising Kichwa,” is about regaining visibility and a voice for indigenous Ecuadorians through online media, made for and by Kichwas. Every Friday afternoon, the hosts of Kichwa Hatari — Charlie Uruchima, Segundo Angamarca, Fabian Muenala, and Renzo Moyano — meet underground to discuss indigenous music, culture, language, and world views, as well as the concerns of the local community. Together, the four form a microcosm of the greater Kichwa community, representing different generations, backgrounds, and interests — a show “ about expressing oneself and not being afraid to do it”:

We’re motivating people with the program […] We’ve seen some changes. Many of us were afraid to state whom we are, but now, in the streets, in trains, in restaurants, people are speaking in Kichwa. Women dress in traditional clothes. There’s not that fear anymore.