From Facebook Live Questions to a Police Investigation, the Curious Case of a Trinidad & Tobago Presidential Housing Allowance 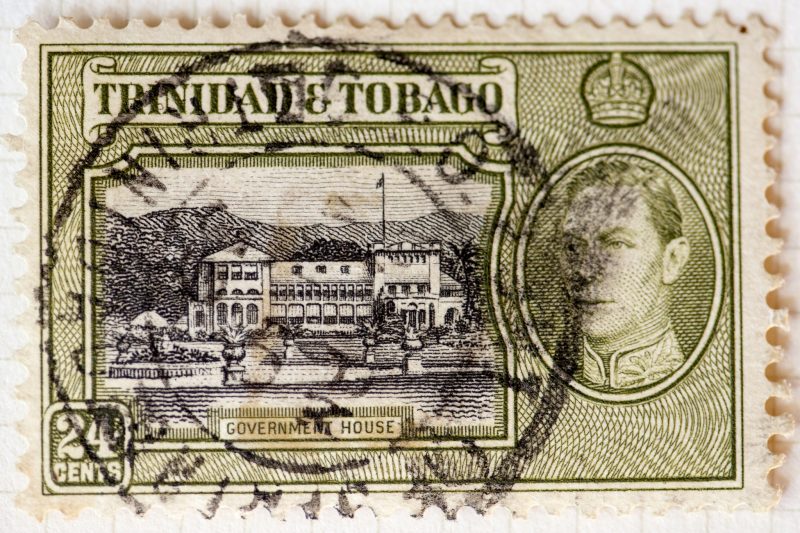 Formerly referred to as “Government House”, the image shows a stamp with an illustration of President's House in Trinidad and Tobago, which has been under repair for some years now. Photo by Mark Morgan, CC BY 2.0.

News broke on January 15, 2017, that the Trinidad and Tobago anti-corruption police would be starting an investigation of the country's president, Anthony Carmona.

It's the latest twist in a months-long saga that came to the nation's attention largely thanks to one woman — Rhoda Bharath, a university lecturer who has been putting pressure on the president using social media.

The president has admitted to receiving a sizeable housing allowance while occupying state quarters, which is not allowed. The accounting inconsistencies were first identified in the 2015 Auditor General's Report on the Public Accounts, released in April 2016. Bharath's Facebook Live sessions on the issue attracted such a high level of public support that the president was forced to make a public statement. Portions of his statement were later found to be contradictory.

After seeking the advice of a senior attorney based in the United Kingdom, Bharath formally requested that there be a police investigation into the president's housing allowance. Based on Bharath's evidence, the British Queen's Counsel, Cathryn Mc Gahey, found that there were “reasonable grounds to suspect that the offence of misconduct in public office has been committed”.

The police were slow to respond to Bharath's calls for an investigation, but on January 12, the issue came under further public scrutiny when the Public Administration and Appropriations Committee (PAAC) met to examine expenditure practices at the president's office. Bharath herself kept a close watch on the proceedings, flooding her Facebook feed with live updates.

Keeping up the pressure, Bharath also linked to a news report about a man who was given a harsh sentence for stealing cigarettes and rum, commenting:

If this is what a man get for cigarettes and rum…what we giving people who tiefing we housing allowance $$$$$$$$$????
#StrenkAndPowaz
#Cargona

On the heels of the PAAC meeting, other social media users — including cartoonist Dion Dane Jennings — began to agitate for the police investigation to begin: 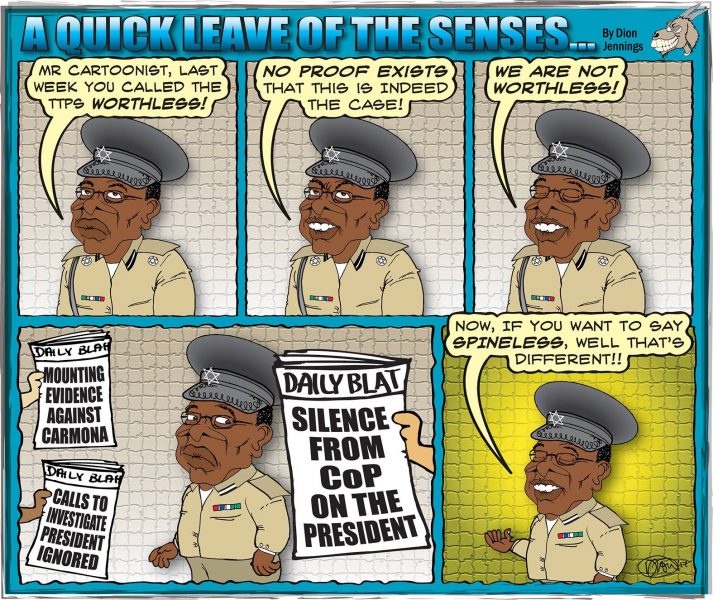 Cartoonist Dion Jennings’ assessment of the Trinidad and Tobago Police Service's performance when it comes to investigating allegations of financial mismanagement by the country's president. Widely shared on Facebook.

By January 13, when mainstream media ran a story claiming that the Office of the President had estimated an overseas travel budget of TT $6.4 million (close to US $950,000) — an obscenely higher amount than the TT $1 million (approximately US $150,000) approved by parliament — the police were in quite a position. Two days later, it was announced that they would commence the investigation.

Facebook user Ja Ffari scoffed, “It take them long enough.” Another social media user, Marvel Mendez, took the announcement as a sign that the government was committed to fighting crime “at all levels”.

The explanation of the police was somewhat confusing, however. Acting Commissioner of Police (CoP) Stephen Williams made the point that this was not a criminal investigation, even though the matter was being spearheaded by the Anti-Corruption Investigations Bureau. Corruption is a criminal offence.

Williams said the matter was a question of whether or not the Chief Personnel Officer (CPO) “went beyond her authority”, adding that even if she did, it still would not be a criminal investigation, but rather, “a matter for the Public Service Commission”, which oversees the civil service. The CPO heads the government department which determines remuneration and other work-related terms and conditions for public sector employees. The acting CoP added that “the only time that this becomes relevant for the police to consider is if it involves criminality”. Thus far, he says, “nothing has been so advanced.”

Many netizens were sceptical. Gerard Gordon-Toylor commented on Facebook:

Hmmm, I wonder if this investigation will finish before the POTT [President of Trinidad and Tobago] leaves office? Has the Ag CoP ever concluded an investigation?! Maybe we can get the next POTT to launch an investigation into that, hmmm, is that one of the powers that the POTT has?
Oh T&T, a tale of woe, corruption, greed, death and disappointment, smh.

On January 16, there was a report in one of the national dailies which said that asbestos had been found at President's House. Carmona, who currently resides at a cottage on the grounds of the main house, stopped receiving the housing allowance when he moved there in 2015. Bharath wondered whether the report would “raise the issue of suitability and Housing Allowance again [and] stall the investigation”.

On Facebook, Bharath's lawyer, Justin Phelps, posted a letter to the editor that called for Carmona's resignation, commenting:

Observe the silence of the usual pontificators, the ‘independents’, the intellectuals, the change agents. Where are they? And what credibility could they have going forward if they are silent now?

Meanwhile, the opposition has accused the government of trying to remove Carmona from office before the end of his term, and warned that they will bring a motion to expose the “conspiracy”. The opposition was in government when Carmona was inaugurated in 2013.

In this Carnival season, though, when many calypsonians are known for their caustic social commentary, the 2016 Calypso Monarch, Devon Seales, released a song — “I, Carmona” — which could very well be interpreted as an indicator of public concern about the matter.

Update: An online petition demanding President Carmona's resignation began circulating shortly after this post was published, on January 24, 2017. Netizen Amanda T. McIntyre, who started the petition, explained,”We are calling on the Senate and the House of Representatives to begin the constitutional process for the removal of the President, so these investigations may proceed free of conflicting interests.”