These Venezuelans Have Some Ideas to Share With Trump Opponents 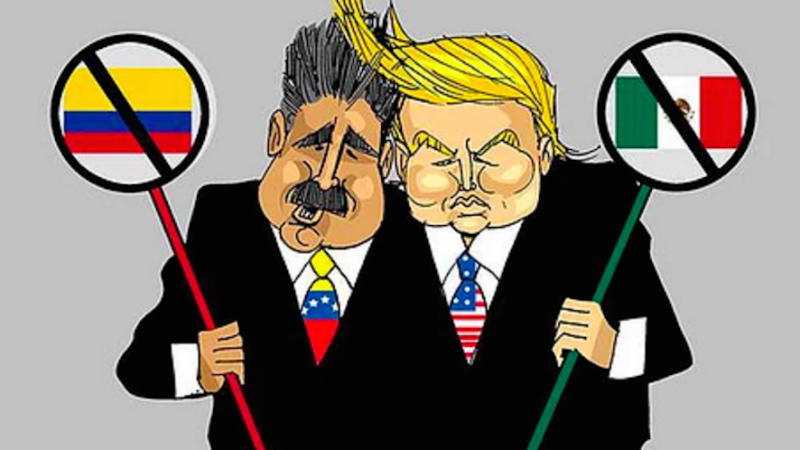 “The recipe is universal. Find a wound common to many, someone to blame for it and a good story to tell. Mix it all together. Tell the wounded you know how they feel. That you found the bad guys.” Image by Venezuelan cartoonist Eduardo Sanabria. Used with permission.

It's not the first time that Trump-Chavez comparisons have been made in citizen media — people have already noted the ways in which both leaders rely on their personalities to push forward their political projects — but now that the presidency of Donald J. Trump has become a reality, some of those who opposed former Venezuelan President Hugo Chavez and the system he created are speaking openly to those who oppose the newborn Trump era.

Caracas Chronicles, a collective site devoted to explaining Venezuela's complex political situation, shared the experiences and ideas of two of their authors. Both posts had their share of debate in the comments section, with people agreeing — and disagreeing — with them. In the posts, the authors explain how both leaders have relied on populism to make their own way, how the strongest figure of the rhetoric is a created enemy, and how the United States could learn from the mistakes they believe Venezuela has made.

In his post “Trump, Chávez and the Personal Ideology of Showmanship“, Manuel Azuaje Álamo analyzes the ways in which both Trump and Chavez shocked concerned citizens and intellectuals, and also how they used communication strategies that hadn't been seen before. Their personality — and the character they created for themselves — was their main asset:

Like Chávez, Trump has built his power on a personal ideology of showmanship, where ideas and facts always take a back-seat to feelings, and to the appearance of ideas. […] The only idea Trump has consistently championed is Trump. Venezuelans see it and can’t help [but] shudder. Chavez also championed himself above everything else, even above the new constitution that he himself had had tailor-made for his initial years in office.

Chavez and Trump share this obsession for showmanship, spectacle and power —or, more precisely, the arbitrary flaunting of power followed by the equally arbitrary decisions not to follow through their own proposals— which was at the center of their relationship with their followers. Chavez became a reality television star after becoming President, Trump had been a reality television star before becoming President […] We in Venezuela know how terrifyingly plausible it is that, in four years, a Trump voter will look around at his declining quality of life and blame not Trump but an ‘economic war’ with China or Mexico, aided by treacherous elites in Washington and left wing intellectuals, always eager to sell out the National Interest.

This element pointed out in Azuaje Álamo's post about the construction of an enemy is also a relevant point in Andrés Miguel Rondón's post, “How to Culture Jam a Populist in Four Easy Steps“. To both authors, one of the main strategies these leaders have used is identifying an enemy and then developing a strong political discourse from there:

The recipe is universal. Find a wound common to many, someone to blame for it and a good story to tell. Mix it all together. Tell the wounded you know how they feel. That you found the bad guys. Label them: the minorities, the politicians, the businessmen. Cartoon them. As vermin, evil masterminds, flavourless hipsters, you name it. Then paint yourself as the saviour. Capture their imagination. Forget about policies and plans, just enrapture them with a good story. One that starts in anger and ends in vengeance. A vengeance they can participate in.

In the four points that follow, Rondón recounts the mistakes he believes Venezuela's opposition to Chavismo has made and the results they have had. He argues that strategies like those used by both Chavez and Trump thrive in polarization.

Rondón says that expressing contempt feeds these divisions — something that, he says, many among Venezuela's opposition movement failed to see. For the author, strategies to force Trump out of power could prove disastrous, and he analyzes the Venezuelan case to illustrate his point:

Your organizing principle is simple: don’t feed polarization, disarm it. This means leaving the theater of injured decency behind. The Venezuelan Opposition struggled for years to get this. It wouldn’t stop pontificating about how stupid it all is. Not only to their international friends, but also to the Chavista electoral base itself. [If you do this] You’ve just lost the first battle. Instead of fighting polarization, you’ve played into it. In which case, try again, seriously, because by all means […] Don’t try to force him out.

Our Opposition tried every single trick in the book. Coup d’etat? Check. Ruinous oil strike? Check. Inviting international intervention? You guessed it. Want to know how they did that last one, by the way? By removing themselves from the ballot in a parliamentary election. Yes, they just handed Chavismo full congressional power as some sort of ‘diplomatic statement’. Honest to God. […] But we failed. Because we lost sight [of the fact] that a hissy-fit is not a strategy. The people on the other side, and crucially Independents, will rebel against you if you look like you’re losing your mind. Worst of all, you will have proved yourself to be the very thing you’re claiming to be fighting against: an enemy of democracy.

There’s no point sugar coating: the road ahead is tough and the pitfalls are many. […] But if you want to be part of the solution, the road ahead is clear: Recognize you’re the enemy they need; show concern, not contempt, for the wounds of those that brought Trump to power; by all means be patient with democracy and struggle relentlessly to free yourself from the shackles of the caricature the populists have drawn of you.

It’s a tall order. But the alternative is worse. Believe me, I know: I’m from Venezuela.