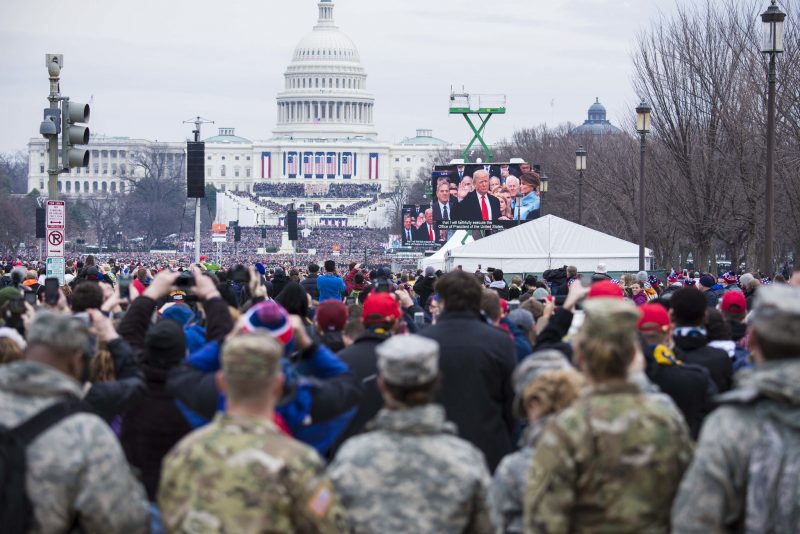 “Soldiers and Airmen from the Florida National Guard look on as President Donald Trump takes the oath of office during the 2017 Presidential Inauguration.” Photo taken from The National Guard flickr page, CC BY 2.0.

In an era of fake news, where netizens sometimes struggle to separate credible reporting from propaganda, there is a new catchphrase, courtesy US President Donald Trump's counsellor, Kellyanne Conway: “alternative facts”.

The phrase slipped out during an interview with TV network NBC's public affairs program Meet the Press, in which she was defending the evidence-free claims of White House press secretary, Sean Spicer, that “this was the largest audience to ever witness an inauguration — period — both in person and around the globe”.

It was widely reported in mainstream media — and spread via social media — that the crowd size at Trump's inauguration was not as large as it was for Obama's in 2009:

The minute Conway said that Spicer was presenting “alternative facts” and that there was “really no way to quantify crowds”, journalist Chuck Todd called out the claims as “provable falsehoods”. He also said that if Spicer could lie about such a small thing, it “undermines the credibility of the White House press office”. Conway accused Todd of being “overly dramatic”.

Dramatic or not, Trinidad and Tobago netizens — like social media users the world over — turned the phrase into a rather humourous hashtag.

Ringling Brothers closed down in anticipation of the competition from the American government.
#alternativefacts

Artist Christopher Cozier was so stunned, he publicly posted this status update:

Trinidadian calypsonian David Rudder, who regularly brings joy to his Facebook followers with his clever commentary, posted this amusing status update, in which he compared himself with popular soca music star Machel Montano:

Laura Dowrich-Phillips, who is black, decided to have some fun with the hashtag on a personal level:

I am a red [light-skinned] girl with a tan #alternativefacts

Kellyanne Conway was which character in Harry Potter again? Or is she a horcrux?

Many social media users were concerned rather than amused, however. As one member of the Trinidadian diaspora put it: