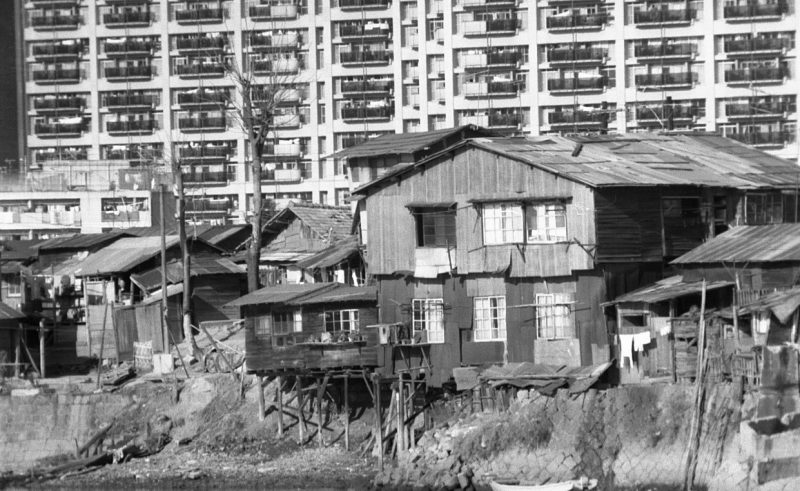 An informal settlement, or slum, located just across the Aioi Bridge to the north of the so-called “Atomic Bomb Dome” in Hiroshima, circa 1972. Photo by Larry Rosensweig. Used with permission.

After rediscovering a treasure trove of photographs taken more than 40 years ago, one American man has created a blog that provides a unique insight into life during the “Japanese miracle,” when the country reconstructed itself after World War II.

The blog “Larry in Japan 40 Years Ago” features Larry Rosensweig's photos and journal entries from his time in Japan in the late 1960s and early 1970s:

In 1968-69 I lived in Sendai, Japan, as a Rotary Exchange Student at Ikuei Gakuen High School. In 1973-74 I lived in Hiroshima and worked for a company, then called Mazda Unyu, which transported Mazda vehicles and auto parts. I kept a journal both times, recently rediscovered along with some black-and-white negatives that had been stored away in a box for decades.

Larry Rosensweig is the founding director of the Morikami Museum and Japanese Gardens in Delray Beach, Florida. Since his days as exchange student more than forty years ago, Rosensweig has been decorated with Japan's Order of the Rising Sun and Gold Rays with Rosette for his contributions to the understanding of Japanese culture among Americans.

Some of Larry's most striking images were taken during his time in Hiroshima in the early 1970s. In one blog post, Larry shares a series a photos from an informal settlement, or slum, that existed in the heart of the city after the atomic bombing and the end of the war:

Mr. Toda [in whose house I was living] explained that the area had been government land into which people moved after the war. At the time no one could have begrudged anybody's converting unused land into badly-needed shelter. However, once established there it became impossible to evict people from their shacks and they remain to this day. 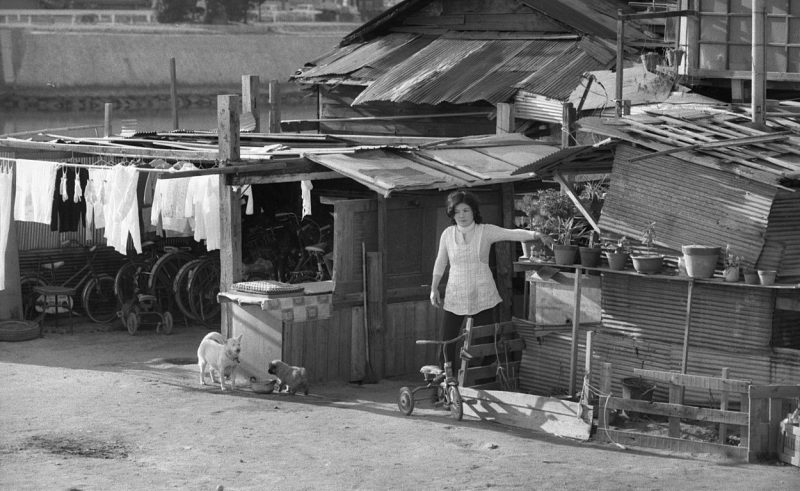 You can view more photos of the Hiroshima neighborhood, along with commentary, here.

Larry also posts some fascinating photos of office life in Japan when he worked for a transport company that specialized in shipping newly-manufactured automobiles around the world. He got the job through a family connection:

Eizo Toda, the father of an exchange student (Sekio Toda) who had lived for several months with my parents offered me a low-level, part-time job with his company, then called Mazda Unyu Hiroshima, whose primary business was transporting Mazda cars, trucks and parts both domestically and internationally.

On his blog, Rosensweig includes excerpts from the journal he kept during his time in Japan during the early 1970s. In a blog post titled “My Days on the Job in Hiroshima,” he describes what it was like to work in a Japanese office in the days before computers: 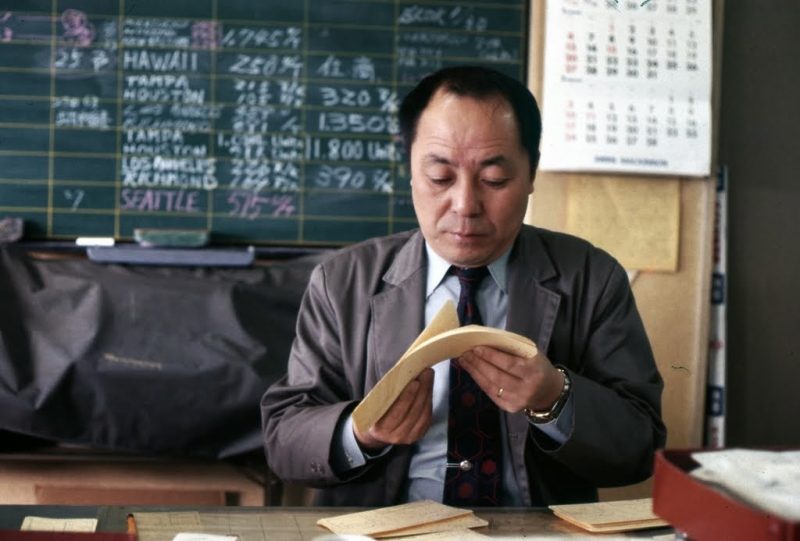 The Gyomuka’s main job involved organizing the actual shipments of vehicles and parts. In a time just before computers took over this kind of work, it required a fair amount of labor to ensure that a specific vehicle moved efficiently from Toyo Kogyo’s Mazda assembly line to a ship headed for the port in the United States or elsewhere that would get it to the consumer or dealer who had ordered it. Every day Inoue-san mesmerized me as he shuffled and sorted cards representing vehicles.

Larry also took pictures of his travels around Japan in 1972 and 1973, when he journeyed widely throughout Japan's four main islands: Kyushu, Honshu, Shikoku, and Hokkaido.

You can see all these photos here. Below, you'll find an image Rosensweig recorded of a seaside village near the famous Shiroyone Senmaida terraced rice fields, on the northwest coast of the Noto Peninsula: 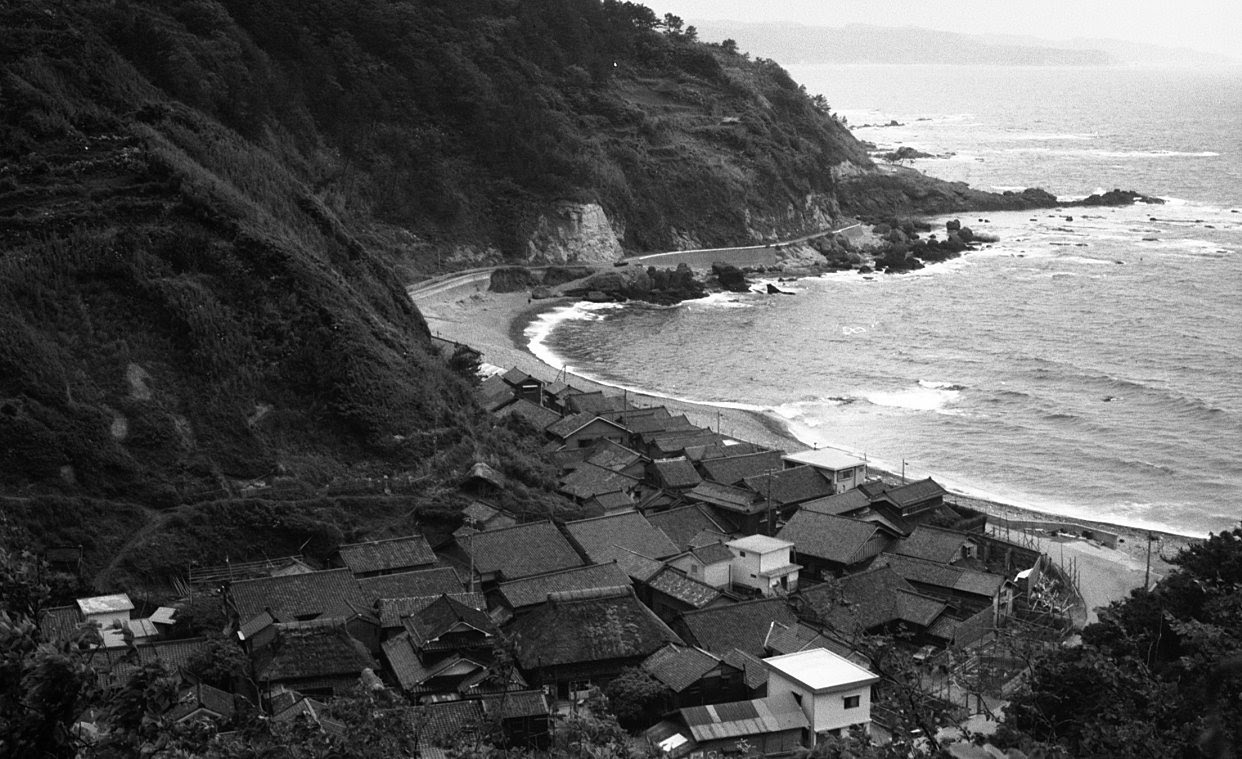 Caption: “As I made my way south and west along the Japan Sea Coast, I spent a day hiking by myself on the Noto Peninsula in Ishikawa Prefecture where I came upon this isolated hamlet, gorgeous rocky coastline, and seaside rice field.”  Photo by Larry Rosenweig. Used with permission.

Larry's blog features a variety of posts from his time in Japan, including the day he earned his black belt in judo, and what he witnessed of childhood in Hiroshima.