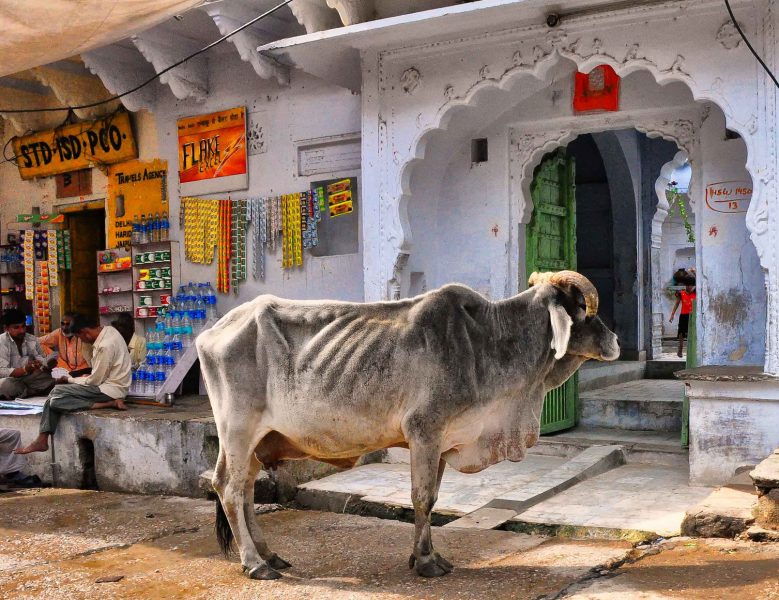 The cow is, quite possibly, the most talked about animal in India. Image from Flickr by Rod Waddington. CC BY-SA 2.0

The Indian cow is apparently omnipotent, or so it would seem from the latest comment made by the country's education minister, Vasudev Devnani. According to him, the cow is the only animal that can inhale and exhale oxygen. He reportedly went on to claim that anyone who goes near the cow will be cured of diseases like the common cold. This obviously outrageous remark is the latest addition to the long list of the ruling Bharatiya Janata Party‘s (BJP) obsessions with the cow.

Cow only animal that inhales, exhales oxygen: Rajasthan Min/ I am convinced Edu Min's are not required to b educated or enlightened

Air Hostess: In the event of a decompression, an oxygen mask will automatically appear in front…

However, The Logical Indian also pointed out the reality of the situation:

There are many who believe this and share the information on WhatsApp and Social Media.

Technically that is correct. It does breathe in air containing~0.04%co2 and does exhale our air with about 15% o2. Unfortunately so do all mammals.

What sirjee missed was in that conversion process the cow sure does make a mean steak of itself.

The BJP is accused of Hindu majoritarianism and one of its foremost leaders (now the country's prime minister), Narendra Modi, was the chief minister of the state of Gujarat when riots broke out between Hindus and Muslims. The BJP and its close ally, the Rashtriya Swayamsevak Sangh (RSS), along with other allied organizations, have not only been accused of manufacturing those riots, they have been consistently criticized for their intolerance.

Ever since Modi became prime minister, riding on BJP's landslide election victory in 2014, the country has been witness to several hate crimes committed in the name of protecting the cow. Several incidents point towards the politicization of cow slaughter taking a dangerous, communal hue. In September 2015, a Muslim man was killed in the state of Uttar Pradesh by cow protection vigilantes, on the suspicion that he had consumed beef. In July of 2016, some men from the socially marginalized Dalit community were thrashed for skinning a dead cow, which also happened to be their ancestral profession. This incident — a video of which went viral and shocked the nation's conscience — was followed by massive protests by Dalits against the injustices towards their community. These demonstrations were carried out in the city of Una, in Gujarat state.

The prime minister himself was forced to admit that cow-vigilantism was becoming a menace, saying, “I feel really angry at the way some people have opened shops in the name of cow protection. I have seen that some people commit anti-social activities through the night, but act as cow protectors by day.”

While the cow is considered holy by many Hindus, it is also consumed as food by many other Indians, including both Hindus and Muslims. The BJP and its allied Hindutva forces have been accused by secularists for not respecting India's multicultural fabric, which includes diverse communities with differing religious beliefs, cultural practices and ways of living.

The Twitter page “Truth of Gujarat”, which is highly critical of Narendra Modi and the Hindu right wing forces, mocked the education minister's statement with the following post:

Trials have started at Nagpur RSS HQ after Rajasthan Education Minister revealed that cow is the only animal that inhales & exhales oxygen. pic.twitter.com/qAWuCzdfSK

When will this nonsense end? Or will it end at all? Each claim appears more ludicrous than the previous one. [..] Already scientific temper is poor in India and such rubbish only makes it worse.