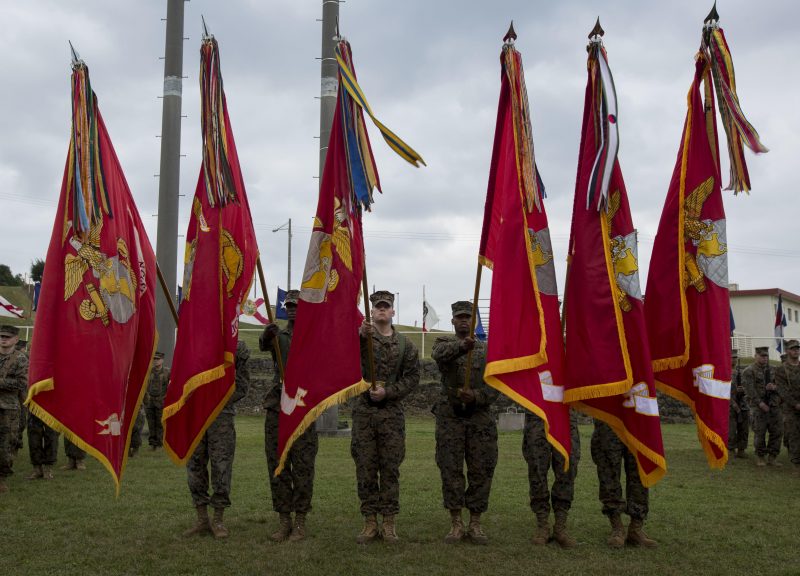 “U.S. Marines carry the Marine Corps colors during a change of command ceremony for 3rd Marine Division on Camp Courtney, Okinawa, Japan, Jan. 20, 2017.” There are reports the US Marines 7th Communications Battalion, based on Okinawa and part of the III Marine Expeditionary Force, spread rumors that an Afghan man living and working on Okinawa is a terrorist. This photo is public domain. Photo By: Lance Cpl. Sean Evans

In December 2016, a long-term Afghan resident of Japan and more recently, Okinawa, was accused of being a terrorist — without any proof — by an American military unit that is stationed in the prefecture. Rumors spread quickly across social media and the local American military community before being debunked by Japanese bloggers, the Okinawa police and the Japanese media. The incident is an illustration of how “fake news” is created and distributed, leaving little ability to hold anyone to account.

According to the Ryuku Shimpo, a Japanese-operated newspaper serving Okinawa Prefecture, sometime in the early evening of December 23, 2016, a number of messages appeared on the Facebook and Twitter accounts belonging to employees of the Okinawa branch of the Army and Air Force Exchange Service (AAFES), a shopping service aimed at American military service personnel.

Of Okinawa's 1.4 million residents, more than 100,000 are Americans — mostly military personnel and their dependents or Department of Defense civilian employees.

A “terrorist attack” on American Village in Okinawa?

English- and Japanese-language social media posts, reported the Ryuku Shimpo, stated that “an Islamic State proponent is hinting at an act of terrorism near American Village, targeting officials of the U.S. Armed Forces.” American Village is a popular tourist attraction on Okinawa, which is located quite close to several American military bases, and regularly holds fireworks and other events over the Christmas and New Year's winter holidays.

The social media posts included photos taken from the Facebook profile of Ahmad Milad, a used-car salesman who has lived in Okinawa for two years, and in Japan for the past seven. After the Twitter posts were retweeted over 800 times on December 23, a friend reportedly notified Milad, who then traveled to a police station to clear his name and enquire about how to seek damages for defamation.

Shortly afterwards, many of the social media posts disappeared, but not before rumors of a potential terrorist attack in Okinawa attracted the attention of local and national media — and there was still the question about where the rumors started in the first place.

The next day, after various social media posts had been removed, the Okinawa bureau of the Asahi Shimbun, a national daily, tweeted on December 24:

We asked Japanese police about reports that there might be [a] ‘terrorist attack at American Village in Chatan-cho’, as well as about unverified (or fake) photos of a suspect possibly being circulated internally by emails from the American military; it's unlikely the rumors originated internally with the military. Although the likelihood of [a] terrorist attack is low, Japanese police appear to be on a heightened alert.

Local anti-base activists quickly replied to the Asahi Shimbun's tweet, pointing to evidence that the rumors of a terrorist attack actually came from an official US military social media account. They were picked up by Japanese social media users, who alerted news organizations:

The [US Marines] 7th Communication Battalion and the AAFES spread [the rumors]. If this isn't ‘internal American military communications’, then what is?

Almost immediately after rumors of a terrorist attack had circulated across social media, the Osprey Fuan Club, which is devoted to opposing the deployment of the US Marines’ Osprey aircraft in Okinawa Prefecture (the word “fuan” means “anxiety” in Japanese), posted screenshots of the misinformation on the group's blog and Facebook page.

With multiple screenshots of since-deleted social media posts as proof, the Osprey Fuan Club determined that the source of the rumors — including images of Ahmad Milad that were widely shared on social media — originated from the official Facebook page of the US Marines 7th Communication Battalion, which is stationed in Okinawa. There were also screenshots of official emails from local military leadership that warned of a terrorist on the loose.

US military fabricates story about civilian being a terrorist.

The Marines’ social media posts included several photos of Ahmad Milad, as well as the message, “Naval Criminal Investigative Service and Okinawa Police warn that this man may attack U.S. military personnel during the holiday season. Please let your family and friends know about this.”

The post and the photos were then widely shared on social media by American service personnel, military contractors and their family members residing in Okinawa.

Twitter user JENI ngựa nai made screenshots of various posts, which she shared with the Osprey Fuan Club (larger images of screenshots can be viewed here; it's unclear who the woman in the montage is, or if she has any connection whatsoever to fake news about terrorist attacks on Okinawa):

Thanks for letting me join the conversation. Posts being shared on social media are captioning [this man's] photo as ‘a terrorist on Okinawa’. It's the same photo that was shared by the Marines.

Soon, a variety of posts were being shared on social media, warning Okinawa residents to look out for a potential terrorist. Some Japanese social media users started sharing Milad's photo as well:

I'm not sure where these came from but this sort of stuff is being shared on social media.

NOTE: Contents are confirmed to be fake.

The information went viral outside of the Okinawa community. Evil NCO, a Facebook page and 18,000-strong online community devoted to selling military-themed t-shirts and other kitsch to the US military community around the world, also shared the warning about the “ISIS threat on Okinawa”, along with Milad's photograph. Evil NCO has since removed the post, but a screenshot can be viewed here.

After Milad contacted the police on December 23, social media posts identifying him as a terrorist were removed by the following day. Apart from the Ryuku Shimpo, which immediately published an interview with Ahmed Milad, it took longer for the story to make the Japanese news.

On December 27, the Japanese-language Okinawa Times reported the story of Ahmed Milad and an anticipated ISIS attack in Okinawa as “fake news”  (デマ or “dema”), and that story was then picked up by some Japanese blogs and wire services.

Commenting on the Japan Update article, some readers were left unconvinced of Ahmad Milad's innocence, even while acknowledging that the Okinawa-based American military command was the source of the news.

“It wasn't false [information]. The commands briefed all personnel with official info right before Christmas. I don't know where they're getting that it's false,” said one commenter.

“Before posting news like this that discredits or attempts to discredit the information coming from the military side you should, perhaps, get information from an official source to verify information on both sides. Otherwise you're spreading rumors/false news from the other direction,” said another.

Neither the Marines 7th Communication Battalion nor the III Marine Expeditionary Force, which commands the unit, have publicly acknowledged the social media posts that identified Ahmad Milad as a potential terrorist, despite being implicated with spreading the rumors online.

According to a statement published several days after the terrorism accusations had been debunked, Milad explained that military investigators had visited him on December 23 and asked about his relationship with ISIS, and whether he had been at Araha Beach with a knife.

Generally speaking, US military authority extends only within the physical boundaries of Okinawa's many military installations, so the American investigators had no right to question Milad; it is uncertain how Milad responded to investigators’ questions on December 23.

Since being exonerated, Ahmad Milad is reportedly contemplating suing for defamation, although he has not stated who he will bring legal action against.

Editor’s note: We decided to embed the tweets with screenshots of the misinformation and images of Ahmed Milad after a great deal of contemplation. While we were unable to get in touch with Milad, he set the precedent of trying to clear his name by speaking to Ryuku Shimpo; that interview was accompanied by a photograph of Milad. We took that as a lead that he wants to confront this misinformation head on. Also, we thought it was important to report the origin of the fake news and how it spread. That's why we embedded and linked to tweets and posts that contained the misinformation.