With One More Vote, Trinidad and Tobago Could Ban Child Marriage 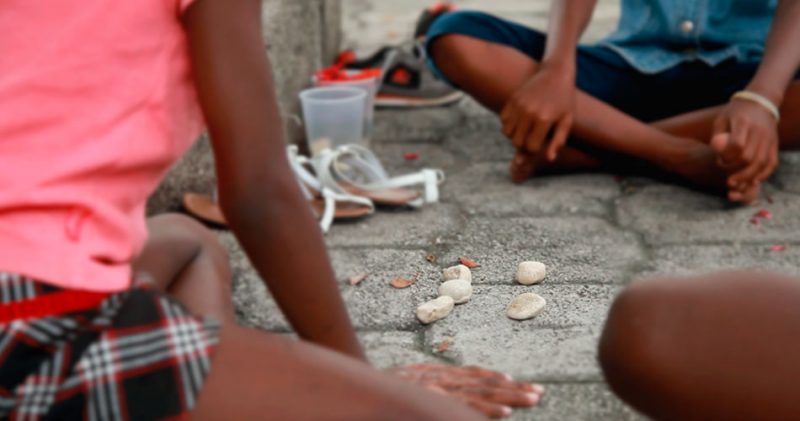 Child marriage will likely soon be illegal in Trinidad and Tobago. The Miscellaneous Provisions Marriage Bill, which Trinidad and Tobago's attorney general presented in the country's senate nearly ten days ago, has passed — even with four opposition senators (including a woman) and one independent choosing to abstain. All that remains, as the bill proceeds to the House of Representatives, is the support of a simple majority to make it into law.

However, Sat Maharaj, the secretary general of the Sanatan Dharma Maha Sabha, the country's most high-profile Hindu organization, has threatened legal action, should the amendments to the Marriage Act be passed.

The lone woman who abstained from the senate vote, Khadijah Ameen, maintained that religious perspectives that were expressed in parliament “through two temporary appointments in a representative of the Muslim faith and a representative of the Hindu faith” had merit, saying, “Those views have been criticized but they are real, they are part of our multicultural society and we must give an air to those views.”

On Twitter, Tillahwillah, a women's rights advocate who participated in a protest with the Coalition to End Child Marriage group on January 17, 2017, said of Ameen's stance:

Dear #KhadijaAmeen, You are the worst possible cramp in the womb of this country and I wish it had some kinah ibuprofen to deal with you.

Many netizens feel that the issue is much wider than marriage alone. Facebook user Skye Hernandez mused:

People, don't think it's only those who are still advocating to keep child marriage on the books that have a problem, eh. Walk in town with a 10-year-old girl and notice how big men look at her. It is disgusting and terrifying. The whole ‘after 12 is lunch’ culture is not only upheld by outdated religious ‘laws’ and their advocates. It's everywhere in this society — open season on women and girls.

“After 12 is lunch” is an idiom meaning that once a girl is older than 12, she is no longer off limits sexually.

Everyone seemed to be getting involved in the online discussion of this issue, including former Prime Minister Basdeo Panday, whose Facebook remarks on “all the ole talk swirling around” struck the wrong chord with some netizens: 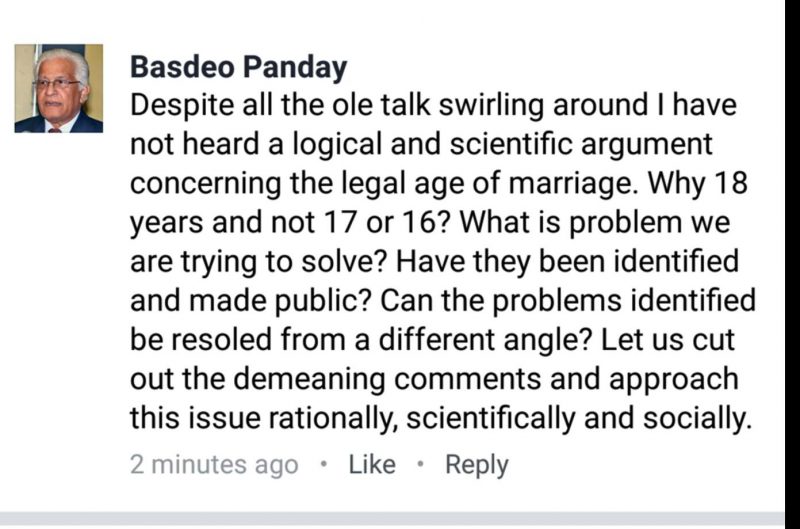 Facebook user Rhoda Bharath was quick to answer his question:

Because marriage is a legal contract and only adults can enter into legal contracts. This point has been made by the legislation and by many present at the debate. Bas baffles me here.
#EndChildMarriageNow

Bas letting down the side here badly. Badly.
18 is the age of legal responsibility. A body can't sign a document or exercise suffrage until they attain that age. They shouldn't be able to sign a marriage certificate and enter into a legally binding arrangement that ties them to someone for the rest of their lives if they can't even open a bank account on their own.

Interestingly, the position of The Hindu Women’s Organization of Trinidad and Tobago on this issue is at loggerheads with the stance of some religious leaders. The group “[reiterated] its call for the age of 18 to be established as the legal age of consent to marry with provisions for 16-18 year olds under strict checks and balances,” adding:

In so doing, we seek to correct the misleading statement made by temporary Senator Basdeo Seetahal in the Senate debate of 11 January 2017.

We have not rescinded our position as he claimed.

Our position, articulated since 2012 in the resolution coming out of the Marriage Act Public Discussions held by the organization that year, is that the Marriage Acts should be updated to reflect the age of consent for sexual relations.

In a letter to the editor submitted to the popular website Wired868, Alana Abdool wondered whether “the hyper-sexualized culture of youths” was linked to the furore surrounding child marriage:

Lust, love and sex are all part of a complex dynamic of the fight for power between the sexes. It is unfortunate that marriage is deeply interwoven into this web and usually suffers the fatal blow. […]

The fight for marriage has been age old. The products of the war has seen the creation of a deeply rooted culture of sexism, feminism, misogynism and objectification. […]

The current debate on child marriages has been a morose, crass exchange of rebuttals over the right to grant the child the opportunity to marry or not marry along a subjective morally defined age range—vis a vis a grant of the right to let them know when to lust, love and have sex using foolproof, technically defined, sexualized parameters.

We must be wary that we do not objectify the discussion of the readiness of children for marriage and in so doing, weaken one of the greatest foundation blocks of a society.

There is infinitely more to this debate than the butchering currently being rendered in parliament. There is also infinitely more hypocrisies in what is not being addressed than what is.

The bill is widely expected to pass in the lower house of parliament. If it does, it would then need to be assented to by the country's president in order to become law.