The Bosnian Politician Caught Lying About an Invitation to Trump's Inauguration 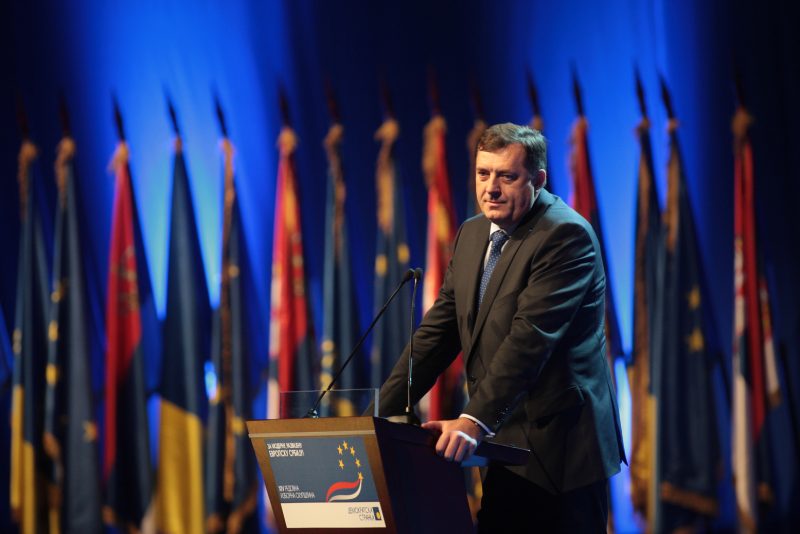 The reports on the upcoming inauguration of US president-elect Donald Trump have mostly been dominated by news of the struggle to find artists willing to perform at the ceremony, of enlisted performers dropping out, of predictions that more people might attend the “Women’s protest march” than the inauguration itself, and of the unusually large number of Congress members boycotting the events.

In a small country halfway around the world, however, the Trump inauguration has been receiving media attention of an entirely different kind, as one of its highest-level politicians has been bending over backwards to prove that he was invited to the official inauguration ceremony.

On January 17, Milorad Dodik, president of Republika Srpska (RS), one of the two entities in Bosnia and Herzegovina (BiH), became the target of sanctions by the U.S. Department of the Treasury for obstructing the “Dayton Accords”, the peace agreement that ended the 1992-1995 war and established the Constitution of Bosnia and Herzegovina.

Dodik, who is known for his secessionist politics, apparently crossed the line in September 2016, when he organized a referendum against the decision of the Constitutional Court of BiH.

In his response to the sanctions, Dodik repeated the claims he had made a month before: that the outgoing US administration was retaliating against him for, among other reasons, being invited to the official inauguration ceremony of Donald Trump.

“Their politics were defeated at the November elections and I am still politically active,” Dodik said. “That’s why they retaliated against me. They probably wouldn’t have if I hadn’t been invited to the inauguration by my friends who are close to the incoming administration. And that was the hit they launched to prevent me from going, because they simply couldn’t stand to see me there.”

This theory, bizarre enough on its own, is even more farcical considering the fact that Dodik never received such an invitation, in spite of the dramatic story he built around these claims.

The claims were first disputed by BiH’s Foreign Minister Igor Crnadak, who stated that no such invitation had arrived through official channels. Crnadak suggested that Dodik had probably secured an invitation to one of many inaugural side events as a result of his lobbying activities in the US.

Dodik responded that he was “…also invited to the Inaugural Ball, where Donald Trump will be present,” and that he would be seated in the seventh row. “Unless the outgoing administration denies me a visa, I’ll be at the inauguration,” he said.

Soon after the media in BiH and the region reported the story, Dodik stated that he had received a call from Hoyt Brian Yee, US Deputy Assistant Secretary for European and Eurasian Affairs, who allegedly tried to pressure him into “abandoning his party’s policy.” Dodik said Yee called him because he knew Dodik was about to apply for a US visa, and that Yee requested among other things, that Dodik respond to the subpoena issued by the State Prosecutor’s office regarding the referendum.

Oh woe, our Dodik can't go to America, and he says Trump invited him. If he doesn't go Trump’s really gonna hold it against him.

Dodik responded to Yee’s request with bravado, calling the US “most responsible for the crisis in BiH” and issuing calls for them to “leave the country and stop meddling here.” A day later Dodik announced that he had been denied a diplomatic visa, and interpreted this as a sign that Maureen Cormack, US ambassador to BiH, was waging a personal vendetta against him—provoked, apparently, by having seen his name on the official guest list for Trump’s inauguration ceremony.

According to Dodik: “The problem emerged when the official list for the inaugural ceremony, the part listing the invitees and the seating arrangements—you know, who gets which row and seat—when the old administration got that notice, they flipped out. Also, the certificates for that, with my name on it, and the tickets to that Presidential ball. Suddenly, it was like—how is it possible that this administration keeps portraying Dodik as the bad guy, and all of the sudden he is invited to this important ceremony, which many in the current administration can’t even imagine being invited to?”

The falsity of Dodik’s claims, however, were indirectly confirmed by his own actions. After all the huffing and puffing over being denied a diplomatic visa, he applied for a regular visitor’s visa to the US and also showed up for questioning at Prosecutor’s Office, thereby breaking his earlier “vow” that he would never come to Sarajevo again.

All the while, however, Dodik never backed down from his original story. On December 26, 2016, public broadcaster RTRS ran an excerpt from a television interview with Dodik scheduled for airing on December 29. In the segment, entitled “Dodik shows the invitation to Trump’s inauguration,” Dodik displays a letter he claims had been sent by his “friends on Trump’s transition team, who haven’t forgotten about Milorad Dodik, or Republika Srpska.”

“They decided,” Dodik says in the television interview, “as is within their right, to invite me to the act of inauguration, taking place on January 20th. And, in the evening—it’s noted precisely, this is the invitation, you can film it—in the evening, a Presidential ball will be held, attended by the President, who usually shakes hands and even takes photos with everyone present. I received this on December 2nd and I didn’t want it to attract too much media attention. But that happened anyway and it came from Washington, as far as I know.”

I get the impression that Trump would postpone his inauguration if Dodik doesn't come.

The letter Dodik showed in the interview, however, was not an invitation to the inauguration, but rather a letter from one of his personal acquaintances inviting him to an event called the Faith, Freedom and Future Inaugural Reception, organized by Family Research Council (FRC), a non-profit focused mainly on anti-abortion advocacy.

Dodik’s claim that Trump would be present at the event was also false, as at the time no information had yet been released as to which inaugural events Trump would attend. When the Presidential Inaugural Committee finally released the list of official events, the “Faith, Freedom and Future Ball” was not among them. 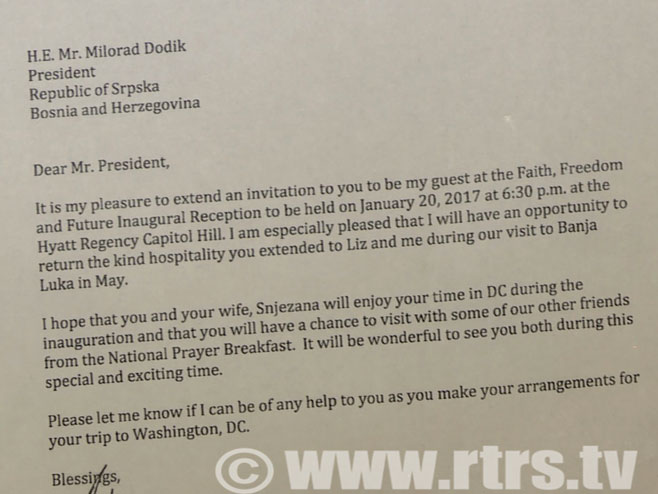 Some days later Obrad Kesić, head of RS Office For Cooperation, Trade And Investment in Washington, one of the offices Dodik set up abroad to act as embassy surrogates for Republika Srpska, doubled down on the story. Kesić stated that the US Embassy was behaving “strangely”, and said that in addition to Dodik, Trump’s team had invited “20 other statesmen” to the inauguration, in a departure from the usual practice of not having foreign leaders at the inauguration. Kesić’s claim was quickly refuted by the US Embassy, which confirmed that there be no changes to traditional practice.

Expecting the news to read: “Dodik, as Trump's strongest partner, is the only one with a VIP seat at the innauguration.”
#Trump in Dodik's shadow.

There are also strong indications that the invitation letter Dodik showed on television did not come from “a member of Trump’s transition team,” as Dodik had claimed. Although the signature on the letter wasn’t visible,  the sender’s offer to return “the kind hospitality you extended to me and Liz” pointed in the direction of Bob McEwen, a former US Congressman who met with Dodik in Banja Luka earlier in 2016. McEwen, whose congressional term ended in 1993, is executive director of the Council for National Policy, one of the several groups on the US ultra-conservative religious right sponsoring the “Faith, Freedom and Future Ball.”

McEwen is a registered lobbyist, which the BiH media has identified as the source of another possible connection with Dodik. There are, however, no direct links between McEwen and Trump. It seems that their closest contact was at Trump’s June 2016 meeting with 500 Evangelical leaders. McEwen does, nevertheless, have previous links with Balkans politics. He is listed by the Podesta lobbying group as one of their contacts for Albania’s public relations in 2013, and among his résumé highlights is his co-hosting of a conference of Balkan Prime Ministers in 2005, “for the purpose of facilitating dialogue and reconciliation in that troubled region of the world.”

McEwen’s résumé also mentions his role as US observer of Poland’s Parliamentary election in 1989, in events “that encouraged the collapse of Soviet dominated governments throughout Eastern Europe”. It also mentions that he gave one of the “closing arguments before the vote to authorize military action by the United States in Desert Storm”, and was sponsor of the “National Strategy Act” praised by Dick Cheney. None of these activities are in line with Dodik’s proclaimed opposition to US interventionism, which, understandably, peaked after he became the target of US sanctions.

Even if McEwen was not the sender the letter Dodik proudly showed off on television, the groups behind the “Faith, Freedom and Future Ball” certainly represent positions that Dodik claims to oppose. FRC’s executive vice president, Jerry Boykin, for instance, was Deputy Undersecretary of Defense for Intelligence during George W. Bush’s “War on Terror” years. Ironically, the Executive Order 13304, which was the legal basis for sanctions against Dodik, was signed by Bush himself during that period (2003).

Taken all together, these factors add a thick layer of hypocrisy to Dodik’s “tale of the official invite”, in which Dodik’s Washington DC friends are portrayed as the anti-interventionist antithesis of the outgoing US administration, and Milorad Dodik himself as a remarkable “statesman” over whom the two sides supposedly clashed.

The author of this post is a member of the team of the Istinomjer (Truth-o-meter), which published her extensive fact-checking of this case.