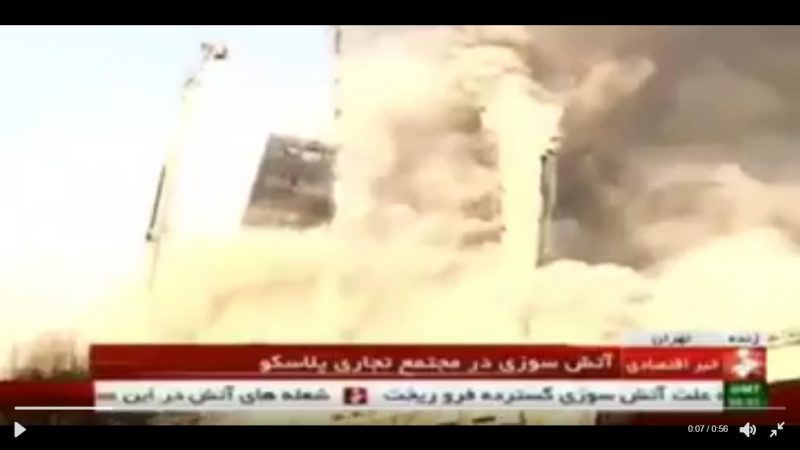 Screenshot of the collapse via Press TV.

Iranians are grappling with shock after the country's once tallest high-rise building collapsed on Thursday morning after being engulfed by fire.

Nearly 200 of Tehran's firefighters from 10 different fire stations had responded to the blaze at Plasco, a high-rise shopping centre, around 8 am. There are fears that people were killed in the collapse, but authorities have yet to confirm. Around 50 to 100 people are believed to have been trapped in the rubble.

Plasco was constructed in 1962, and has become a point of contention in the city as its safety hazards have been long known. The building had caught fire before.

Social media has been abuzz with the news and images of this devastating incident, using the hashtag #پلاسکو in Persian, and #plasco in English. 50 have been reported dead at the time of publishing this post. *Update 20 January 2017:*  Authorities have since confirmed that 30 people were killed.

The Plasko building incident was very tragic and unfortunate. The Interior Minister has ordered immediate care to the wounded, with plans to compensate the victims and investigate the cause of the accident.

One widely shared tweet featured a dramatic photo of firefighters seemingly emotional at the scene accompanied by lines from a poem:

With voiceless sounds, like a tall mountain, like a short sleep, he was a man, a man.

And on Telegram, a popular post on online news site Khabar Online reported that spectators had gathered at the scene in such large numbers that it was making rescue of the victims difficult.

A widely shared Telegram post, with over 38,000 viewers on the fire explains that people have gather in such large numbers as spectators that helping the rescue the victims of the collapse has become difficult. Screenshot from Telegram.

Other posts on social media illustrated how a vast number of Iranians were passive spectators to the catastrophe. While some were reluctant to help, it appeared many were getting in the way of rescue efforts by gathering to capture the event on camera.

Iran cartoon mocking onlookers during today's fire at the historic Plasco building in Tehran, and its eventual collapse. #پلاسكو pic.twitter.com/pOGIiDVa3y

Positive actions from Iranians, however, came in the form of large crowds donating blood for the victims of the collapse.

Photos circulating on social media showed the stark before and after of the Plasco building:

Memories of buying special clothes and fish, now it has all collapsed

Photo of what remains of the landmark #Plasco tower in downtown #Tehran by Mahdi Afrakhteh pic.twitter.com/v9uWD0paGO