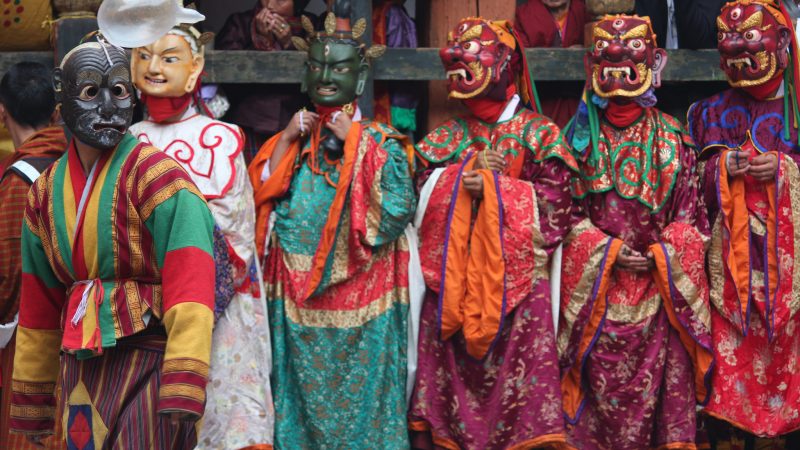 Masked dancers perform in the annual religious Bhutanese festival called Tshechu on the 10th day of the month of the lunar Tibetan calendar. Image from Flickr by Arian Zweckers. CC BY 2.0

The recent banning of a film accused of demeaning religious symbols has stirred up a lot of debate in Bhutan.

The Bhutan InfoComm and Media Authority (BICMA) declared that Hema Hema: Sing Me a Song While I Wait,  a feature film by Tibetan Buddhist lama and writer Dzongsar Jamyang Khyentse Rinpoche, cannot be screened in the country, following a review by the National Films Review Board and the Department of Culture of the Ministry of Home and Cultural Affairs.

The media authority communicated the decision in a letter sent on January 10, 2016 to the production company behind the film, Tsong Tsong Ma Productions, saying the ban was “due to the various religious masks used by the characters in the film, which is not in keeping with our own tradition and culture”.

The film takes place in Bhutan, and is about a group of people who spend several days in the woods together in anonymity, thanks to the masks they wear. It was filmed in Bhutan with more than 400 actors, mostly village people from the eastern part of the country.

The official religion of Bhutan is Buddhism, and it influences many aspects of the small country's culture. Masks feature in some customs. At the moment, Bhutan finds itself having to work to preserve its traditional culture and heritage amidst influence of foreign cultures as the country embraces rapid development.

When art gets trumped by legislation, there is a problem! #FreeHemaHema https://t.co/SS0lZIVE1K

This narrowed minded decision is not just a ban against the film but a decision against the freedom of expression and creativity in Bhutan. It has sent out a loud and clear message to all aspiring Bhutanese artists that in Bhutan there are boundaries to one's dreams and to one's creativity. […]

This decision undermines artistic expression and creative freedom. It reflects the inability of decision makers and media regulator to see the bigger picture. While regulation is a necessary evil to avoid misinformation, deliberate manipulation of facts, and insensitive distortion of cultural values, among others, it should not be arbitrarily imposed to stifle and subdue the budding creative industry.

People are questioning whether the film truly violated cultural or religious symbols as accused when they were used purely for the purposes of art. For example, Tashi TD commented:

The film does not undermine the sacred symbol and use of masks. Rather the masks are used as a powerful symbol and medium to convey the fundamental message about identity, anonymity and freedom.

Modern people needs to be reached with modern means. If BICMA based their judement on their guidlines, then it is high time that they review it to set more space for creative arts and expressions.

Sonam Wangmo Dukpa-Jhalani reviewed the film and its use of masks for Bhutanese lifestyle magazine Yeewong:

The lead actor of Hema Hema, Tshering Dorji, a charismatic and natural actor […], has the hefty task of conveying his feelings with a mask on. It is not the easiest thing to do, but he does so successfully – we feel his desire, we sense his fear, we experience his aggression and remorse. […]

Some of the scenes in the movie are rendered like visual poetry, and some like a mystic, operatic performance.

And some like Sonam Wongmo wondered whether this is cultural policing:

Ironic that while more Bhutanese celebrate Xmas, Halloween, have weddings where they follow western traditions (wearing gowns etc) throw baby showers, in essence observe traditions that are not ours, BICMA is worried that a film about Bhutan is not keeping with “tradition”?

As it goes with the nature of bans, it has made me (and I am sure the rest of the Bhutanese) even more curious, and for HEMA Hema, a ban is a boost.