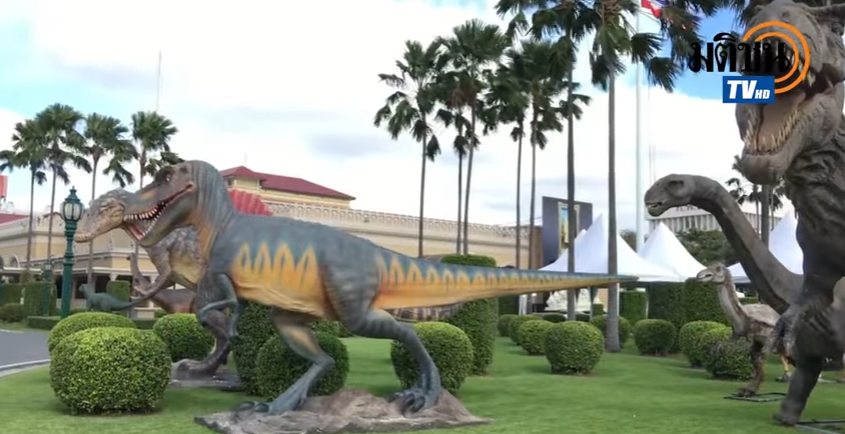 Dinosaur models in front of Government House in Bangkok, Thailand. Screenshot from the video of Matichon TV uploaded on YouTube

Thailand celebrates its annual Children’s Day every January by offering various educational and fun activities to the country's youth.

Government agencies across often invite children on this day to visit public offices to learn about the bureaucracy and receive gifts from the state. The army, for instance, has gained notoriety for allowing children to play with real guns and tanks inside military camps every year on Children’s Day.

This year, the Government House, where the prime minister and some cabinet members hold office, opened its gates to children and encouraged them to play with 20 dinosaur models installed inside its compound.

Government House is open to the public on Saturday for Children’s Day. Highlight is the dinosaurs. Map:https://t.co/pECSAetSbX #Bangkok pic.twitter.com/hItkNp5xKD

The dinosaurs installed by the Department of Mineral Resources are models of species whose fossils have been unearthed in Thailand: Phuwiangosaurus sirindornae, Siamotyrannus isanensis and Kinnareemimus dinosaurs.

For some observers of Thai politics, they couldn’t resist commenting on the symbolism of placing dinosaur models in front of a government building whose present occupant represents an institution which grabbed power in 2014 and has since then failed to restore civilian democracy in the country.

So many dinosaurs are at government house…a few are even seen outside. https://t.co/fnCJun6NDu

The army has launched more than a dozen coup attempts since the 1930s. It took over the government in 2014 and drafted a new constitution containing provisions which guaranteed a stronger role of the military in the bureaucracy even if elections were to be held in the future.

Ironically, this year they fill the front lawn with jurassic creatures and that is exactly what we all become.

Kong Rithdee, the life editor of the Bangkok Post newspaper, sees black comedy in the unveiling of the dinosaurs:

It's not some kind of black comedy, is it? Dinosaurs in Government House, as if we haven't had enough? A Jurassic superimposition on the Jurassic, the exhibition featuring 20 prehistoric reptile species unearthed in Thailand is called “An Adventure with the Dinosaurs”, which sounds like the daily adventure we've had every day anyway. Some of the dinosaurs can move (naturally). The paleontological irony is endless, and so is the unintended analogy.

Prachatai, an independent news website and partner of Global Voices, described the dinosaurs as a symbol of Thai democracy. Indeed, for many people, the belief that democracy can be realized through a military dictatorship represents an outmoded concept of politics.

In the meantime, we hope that Thai kids enjoyed their interaction with the dinosaurs — inside the Government House and outside.