Mapping the Smells of Kyiv

On Christmas Day in Britain, people sat down with their families and friends to eat dinner, open gifts, and muster a little holiday spirit. Over the break, artist and designer Kate McLean traveled to Kyiv, planning some innocent sightseeing in Ukraine's scenic capital. She didn't know it at the time, but Kyiv would be expecting her.

Known for “mapping smells” across the past five years in places all over the world, from Milan to Glasgow to Rhode Island, McLean has acquired some celebrity. When her flight to Ukraine suffered a massive 24-hour delay, she turned to Twitter to vent her frustration.

“Ukrainian International Airlines had a problem with their flaps, and I lost the plot and tweeted something to that effect, and a data journalist in Kyiv texted me,” McClean said.

Her tweet caught the eye of Andriy Gazin, a self-described “data hipster” and “procrastiworker” living in Kyiv. He reached out to McLean, asking if she was visiting Ukraine. “Is it a work visit, and would you mind giving us a talk or some sort of presentation?” McLean said Gazin asked her.

“When Kate posted on Twitter that she's coming to Kyiv, I realized that this is a good chance to meet her and talk about smellwalking and smellmaps,” Gazin said via email. “It was pretty spontaneous decision, but I asked subscribers of my Facebook page about dataviz [data visualization] … and up to ten people agreed to participate.”

So, on Dec. 25, the small group “with notepads taken from various conferences and pieces of paper folded up, and a group of people who came from all sorts of backgrounds,” set off to record the scents of Kyiv in the winter. The results, it turns out, are glorious. 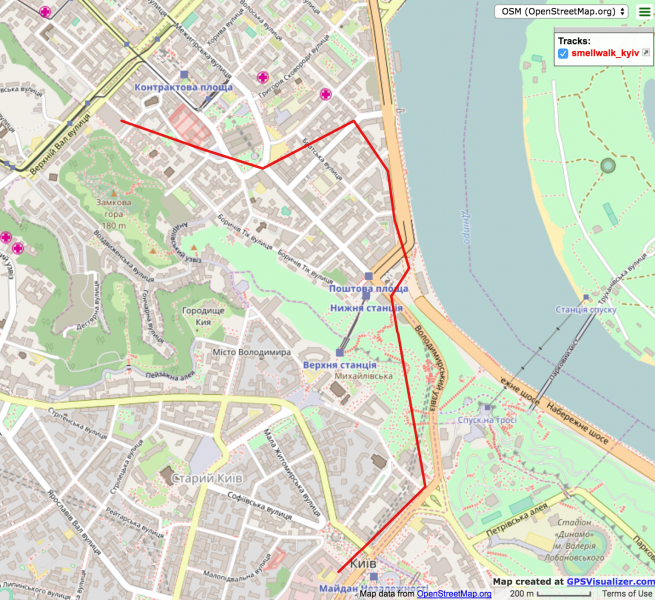 McLean is now in the process of creating a detailed map of where Kyiv’s wafting winter aromas lurk.

The “smellwalkers” recorded the city's scents, including smells like “the islands of summer,” “wet animal fur,” and “rusty metal.” McLean, as a newcomer to Kyiv, found herself acutely aware of smells that may have bypassed accustomed locals. “The charcoal that the food stalls were using right at the top of St. Michael’s church … [was] really, really distinctive,” McLean said.

“Most people were grilling or barbecuing meat — so there were strong smells of that coming out — but what they were using as fuel was very different … these were big, dirty drum braziers with real charcoal in them,” she says. While noting the difficulties in “pinning down” the fluidity of smell, there were some scents she says that are very specific to Kyiv.

“One was very much the wood smoke — that came in a variety of forms. It came from the charcoal and it came almost as a background smell. The other is very specific in terms of the salo — it’s not something that I’ve ever witnessed anywhere else in the world, ever,” she said.

Kyiv's holy sites also presented unique scents that McLean said the locals had trouble noticing. “It’s the labdanum (rockrose resin) inside the churches that’s used as the incense, which is called laddanik there. I noticed that, but it didn’t feature in the smell walk — nobody actually noted it down … there was just enough of that incense, candle, type smell that was floating out from its woodwork doors for me to notice,” she said. 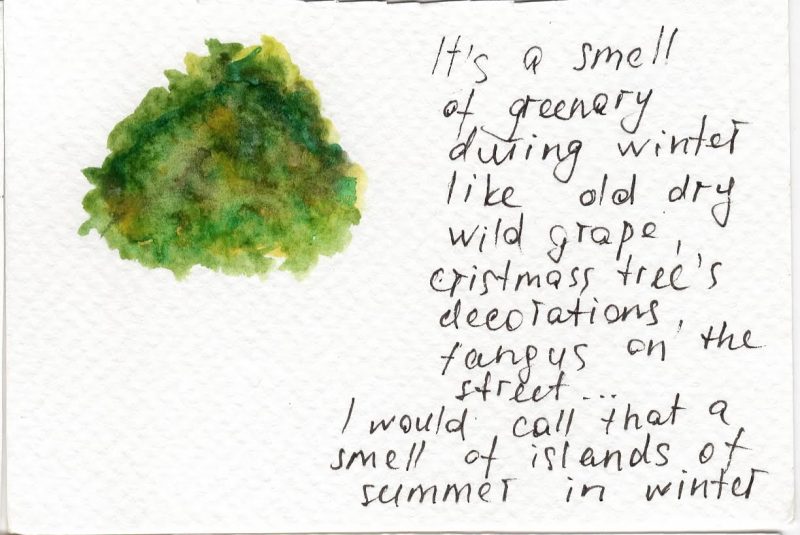 While the trek across Kyiv was a novel introduction to the city for McLean, the locals in her group experienced it as a new and intriguing perspective on something familiar. “I worked for ten years in the pharmaceutical industry,” said Anastasiya Fesenko. “The smell walk was, for me, like a new window into a country … that I love,” she said. “Inspiration is everywhere — herbs, flowers, fresh air, and trees … I was mostly impressed with how many smells are around me.”

Gazin noticed how mapping the smells of the city may open up new possibilities for conceptualizing Kyiv. “I suppose, the first thing you realize during the smellwalk is that you have never actually experienced the city through smells. I mean, of course you notice different smells everyday, like coffee, gas, a bakery, perfumes, etc. But you never tried to combine all … to describe a specific place or the city in general,” he said, noting the growing variety of ways data scientists have been mapping spaces, including the work of startups like what3words, which breaks down spaces into three-by-three-meter blocks, into three-word “postcodes.” 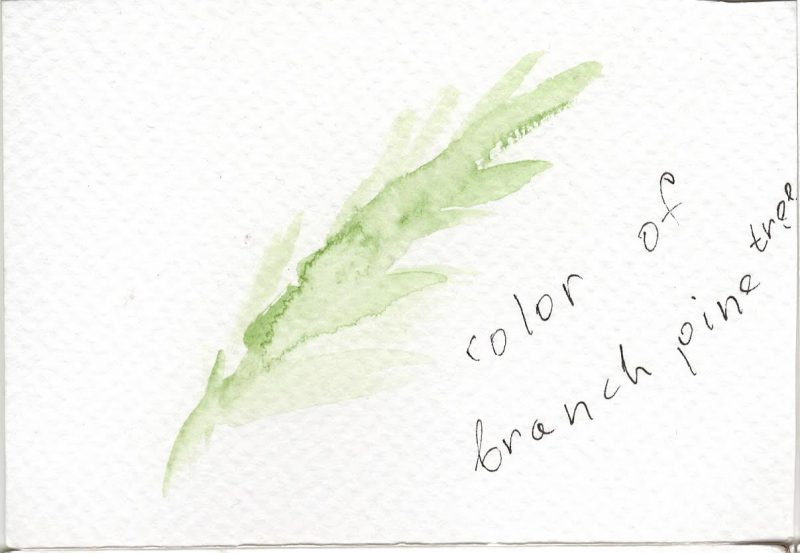 “What I didn't realize is that we can really describe different parts of Kyiv through a number of smells,” Gazin said.

Kyiv's most potent fusion of smells appears to be Zhytniy Rinok. According to Gazin, this place resembles “a museum of different smells: raw meat and fish, and milk and honey, spices and fruits, but also household items like wallpapers, and clothes.” 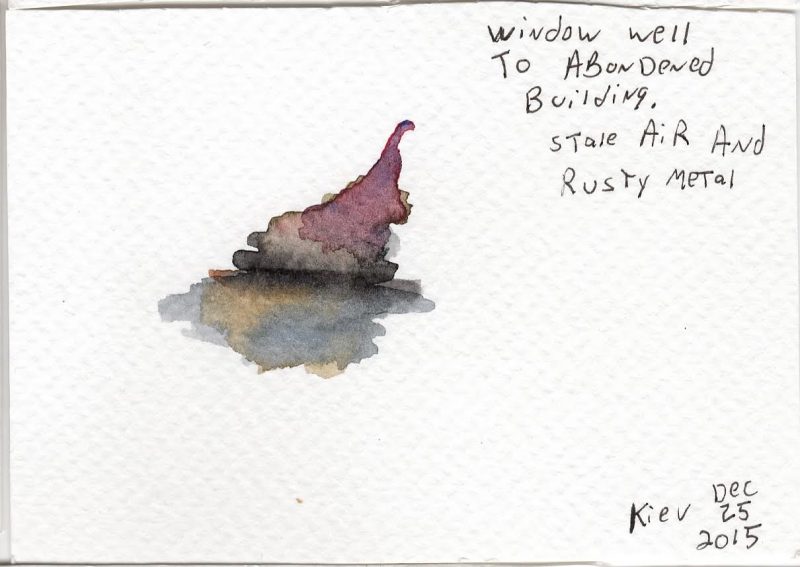 Citing one of her teammate's findings, McLean wrote, “You’ve actually got all of the seasons that are in here – you’ve got winter, summer, spring, autumn all prevalent in that one market place,” she said. “Summer was strawberries, autumn was pomegranates … as we entered the market place there was glintwein (winter), and then spring was somebody selling fresh herbs in the corner that (a) were very green, and (b) were very very fresh — a leafy volatile scent came from them. So these guys all did visualizations at the end of it.” 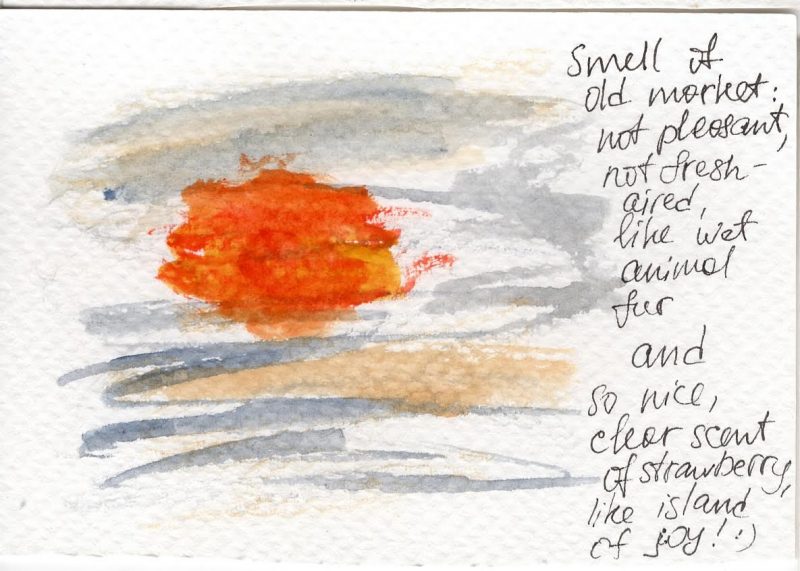 Naturally, however, the seasons of the year affect the way in which smells are both received and transmitted “hugely,” McLean said. “It was one of the things we talked about at the start. Smells actually need heat in order to be able to volatilize. So the warmer it is, the more smell molecules there are in the air … the human sense of smell also closes down in the cold weather. So we’ve got a double whammy: there are fewer smells and we’re less able to detect them.”

The map could prove to be a valuable asset — and not just for people who can't be in Kyiv to breathe the air. One women in McLean's group is almost without a sense of smell, Gazin says. “She only came on this walk to experience the city through what other people can smell,” he said.