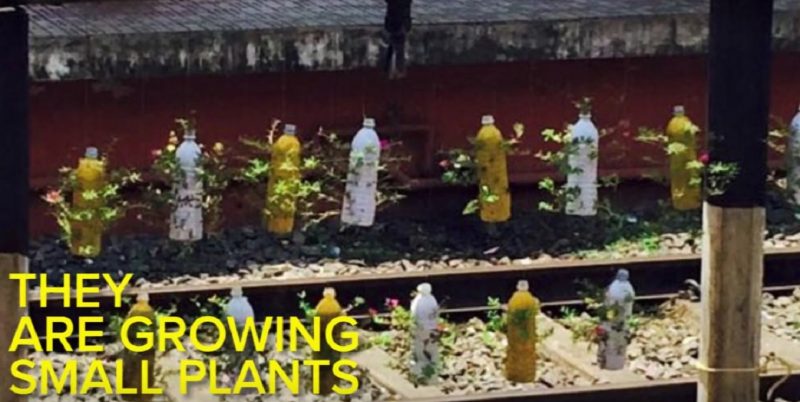 Screenshot from The Better India's video report, available via YouTube.

Back in 2002, India banned the use of plastic bags to protect the environment and maintain the free flow of sewers. Although enforcement remains a problem, it was a positive step forward. However, with the focus on plastic bags, other growing plastic menaces like discarded bottles and wraps are largely ignored.

In Kochi, India, a railway station master and his team are doing something about it — turning plastic bottles casually discarded on railways tracks by passengers into plant holders.

Plastic bottles, disposable cups, empty water sachets and thin sheets are constantly being dumped in vacant spots and public spaces across India. According to the Central Pollution Control Board, 40% (6,137 tonnes) of the total plastic waste (9,205 tonnes) per day is uncollected and littered in the Indian capital alone. The country is sitting on a pile of 5.6 million tonnes of plastic waste every year. And it requires a lot of effort from all quarters to reverse this.

The Aluva Railway station in Kochi is making an example of how people can do something about the problem.

According to the above video, the idea was put into practice by stationmaster C Balakrishnan and his team members Mr. Mohan and Ms. Indu. These bottles aren’t just decorative. They also function as barricades to stop people from carelessly track-hopping. Neha Venkatesh wrote on Facebook:

The most critical impact of this simple intervention blew me away: often, people used to cross railway tracks and that had led to an unprecented increase in rail accidents; these plants don't leave much space for people to cross through, thereby encouraging them to use the foot over bridge to cross over to another platform.

Perhaps this creative recycling will prompt other innovative ways to deal with India's growing plastic waste.