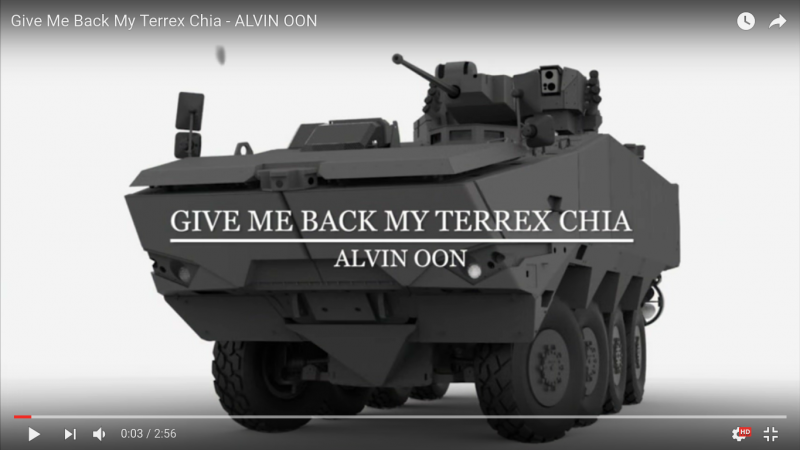 A shipment of nine Terrex Infantry Carrier Vehicles and other military hardware was seized by Hong Kong Customs and Excise Department on November 23 last year.

The vehicles were en route to Singapore following a joint military exercise in Taiwan. Similar unofficial military cooperation between the two countries has been occurring for decades.

Singapore’s defence minister Ng Eng Hen said earlier this week in the Parliament that the seizure does not comply with international law. He also revealed that Singaporean Prime Minister Lee Hsien Loong has written to Hong Kong Chief Executive Leung Chun-ying requesting the immediate return of the vehicles.

Hong Kong authorities have said they were still investigating if the shipment involves arms smuggling. But foreign affairs analysts believe Beijing was behind the incident and wanted to pressure Singapore into ending all unofficial bilateral exchanges with Taiwan.

In response to the mini-crisis, Singaporean bloggers urged the return of the nine “Terrex Chia” with hilarious Singlish songs (via Hong Kong Free Press).

Singlish is a popular creole based on English with unique slang and syntax spoken colloquially in Singapore. It is usually a mixture of English, Mandarin, Tamil, Malay, and other local dialects like Hokkien, Cantonese or Teochew, according to Wikipedia.

YouTuber Alvin Oon's song, “Give Me Back My Terrex Chia”, went viral in the space of a few days. He introduced it on YouTube as “Song Diplomacy”:

Song Diplomacy – Maybe a light-hearted song will lessen the tensions and see the return of Singapore's 9 Terrex Infantry Carrier Vehicles.

Oon mixes English with Chinese dialets (Hokkien), Malay and Tamil in his song during which he asks repeatedly:

Why you take something that is not yours but mine?

One day after Oon released his song, another blogger Mr. Brown rewrote the lyrics of a Chinese Lunar New Year Song into “Give Us Our Terrex Back”, echoing Oon's song diplomacy:

This post sources information from a series of articles from Hong Kong Free Press.