When talking about Niger, one often brings up its majestic Sahelian landscapes, its fight against extremist violence and its uranium resources. Yet rarely does one speak of its distinctive cuisine, which is as rich in variety as the national population is culturally diverse. Ali Douka Mahaman [2], blogger for the website Mapping for Niger and a resident of the eastern Nigerien city of Madaouda, presents a dish little known outside his home country.

Kilishi is a dish of Nigerien origin. Its name comes from the Hausa language and means “fine slice of meat (beef or boneless mutton), dried and spiced.” The final product is a thin slice of sundried meat whose time-consuming preparation entails:

–       grilling the meat over a fire and finally, seasoning it with spice and peanut oil. 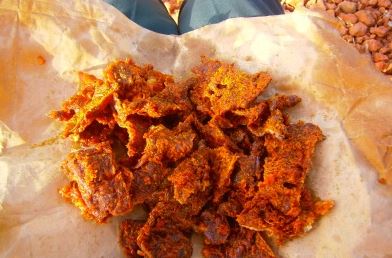 In  Niger, centres for kilishi production are mostly located in the southern strip of the country, primarily in the cities of Madaoua, Guidan-Roumdji and even in the capital, Niamey. The main players in the production of this dish are the bangarou, or butchers, who have cultivated a justified reputation as masters of meat.

There are the two main types of kilishi:

Kilishi production remains a labour-intensive process that is very much the preserve of Niger's vast informal economy.

Here is a video showing how it is produced:

Moreover, given that Niger is facing massive emigration due to a depressed economic climate, kilishi is increasingly moving across the border, to coastal neighbours like Côte d'Ivoire, Cameroon, Nigeria and Gabon.

A study conducted by the Niamey municipality estimated that bbetween 700 and 1000 kilograms [3] of kilishi is produced every year in the city . This product can be enjoyed with onion slices and spices, and makes for a delicious and comforting desert.