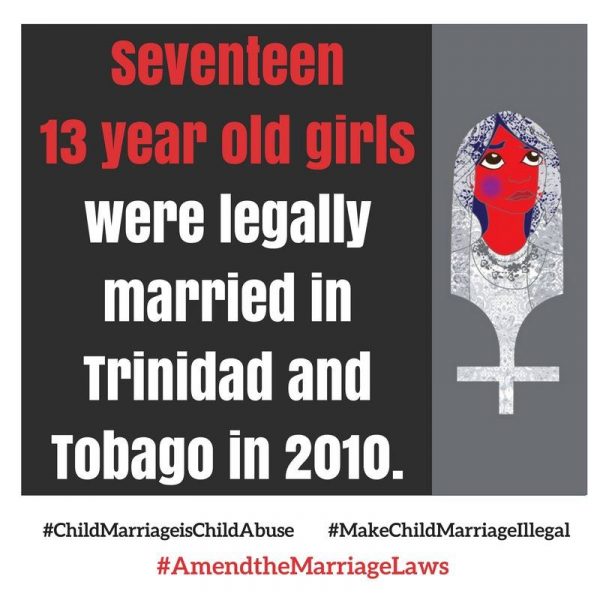 With the proclamation of The Children Act on May 18, 2015, Trinidad and Tobago raised the age of sexual consent from 16 to 18. Ironically, however, because The Marriage Act of 1923 is still on the books, the youngest legal age of marriage remains 12 for girls and 14 for boys, once there is parental consent.

The issue caused a big hullabaloo back in May 2016. That's when Brother Harrypersad Maharaj, the leader of the Inter-Religious Organisation (IRO) — the members of which represent the country's diverse religious groups — declared that the government should not amend the Marriage Act because “age did not determine maturity”.

While the practice is still adhered to by some members of the Hindu, Muslim and Orisha religions in Trinidad and Tobago, the public pressure to repeal the law has been significant. The government, which promised to reassess the situation, has kept its word. On January 10, 2016, the country's attorney general, Faris Al Rawi, presented the Miscellaneous Provisions Marriage Bill in the country's senate. The bill aims to get the marrying age in sync with the new age of sexual consent and “to protect the voice of the child”. Judging by the response on social media, the move was a welcome — and long overdue — one.

However, it appears that the country's opposition, which comprises a few practitioners of some of the faiths that allow child marriage, may not be supportive of the bill. The contribution from the opposition bench that got the most attention came from temporary senator Dr. Waffie Mohammed. Temporary senators are appointed to fill in for senators who may be absent from office for whatever reason, though Mohammed appears to have been appointed just for the day of the parliamentary debate, ostensibly to make the case for keeping the law as is. He stated:

So you will understand the wisdom in this, because the age of puberty will vary in climatic conditions, from place to place. If we had said, like the United Nations, 18 years, or this or that, it would be varying with regards to the standard of judgement.

That line in particular prompted journalist and Facebook user Vernon O'Reilly Ramesar to sound off about a video on the subject:

Sometimes when I watch the Parliament Channel I want to knock my head repeatedly against a wall. Some feel girls should be able to get married as they enter puberty …because climate.

Senator Mohammed went further, saying that the Quran has not changed and that any amendments to The Marriage Act would be “oppressive to Muslims”, to which Ramesar retorted:

Here's the thing, waiting till both parties are 18 won't kill them and it may well save the girl's life. Nobody is being oppressed with the proposed changes to the laws. If you want to talk about oppression, the minimum age for same sex marriage (or even civil union) in T&T is never.

The popular political and sports site, Wired868, accused some of the country's religious leaders of “gazing at our children with criminal intent”, adding:

The Quran, for the kafirs reading this article, is believed to have been written 1,385 years ago. And, as we know, public sentiment on a wide range of issues—from inter-racial marriages, homosexuality, abortions, global warming and seatbelts—evolve constantly according to time, information and culture.

After twenty years of consultations with stakeholders on numerous occasions, Team Paedophilia aka the Opposition wants a Joint Select Committee to discuss their right have sex with 12 year olds.
#EndChildMarriage

Both Bharath and Ramesar called out the opposition's waffling on the issue. Last year, the leader of the opposition, Kamla Persad-Bissessar, said, “Our very clear position is that [child marriage] must not be allowed by law; it must not be seen as right or permissible by society and whether by tradition or circumstance, must not be allowed to continue” — the complete opposite of the argument Senator Mohammed put forward.

There are politicians, clergy and partisan hacks in my country who believe it is acceptable for children, even as defined by specific children's legislation, to marry. Maybe they should have met the Yemeni physician I once had a conversation with and during which he described what happens to the body of a 12-13 year old girl during their ‘honeymoon’ which routinely ends on a hospital bed. This is not a matter of cultural relativism. It is a matter of cruel criminal behaviour. 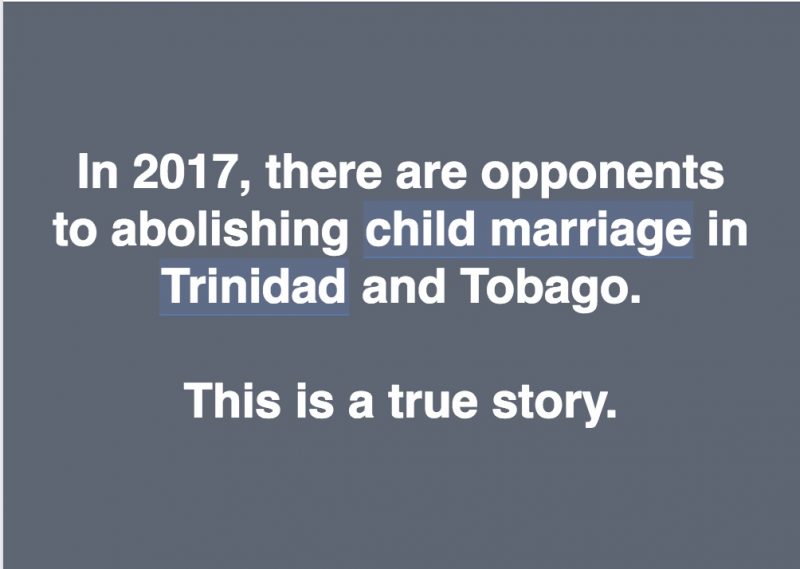 “In 2017, there are opponents to abolishing child marriage in Trinidad and Tobago. This is a true story.”

While one independent senator got a lot of online support for calling the practice “child slavery”, in the public Trinidad and Tobago Muslims Chat Group on Facebook, there were different points of view. One commenter “[did] not believe that a girl has to be 18 years in order to be considered ready for marriage”, while another member of the group thought “a better approach would be to implement age gap barriers to the existing marriage act to address the issue of paedophilia.” Irshaad Ali suggested that the value system was inverted:

We live in a time where it is permitted by society to commit acts that are not permissible and it is prohibited to do what The Creator has made permissible, for example, parents or guardians prefer to allow teenagers to do as the please like fornication and consuming of alcohol, partying, exposing their bodies but marrying them to protect them from doing these acts is wrong, what a twisted society we live in

Outside of the group, there was a lot of push-back against this line of reasoning. The blog What's the Idea? argued that child marriage was tantamount to child abuse:

Child marriage disproportionately affects girls and is part of the undergirding of patriarchy which we have been collectively dismantling. It uniquely secures legal access by men to the bodies of girls at a time in their lives when they do not have the capacity to give informed consent as is acknowledged in sexual offence legislation all over the world.

In this country, between 1996 and the present, 97% of child marriages were of girls. These girls can be as young as 12 as was the case in 2008. And if that is not enough chilling news, the available data shared by the AG shows that the men who ‘married’ these girls were as old as 52. Marriage of girl children is a sheer perversion. It legitimizes conduct that would otherwise be child sexual abuse. How can it be otherwise?

Although the government will require some opposition votes for the bill to be passed, it it widely expected to go through.