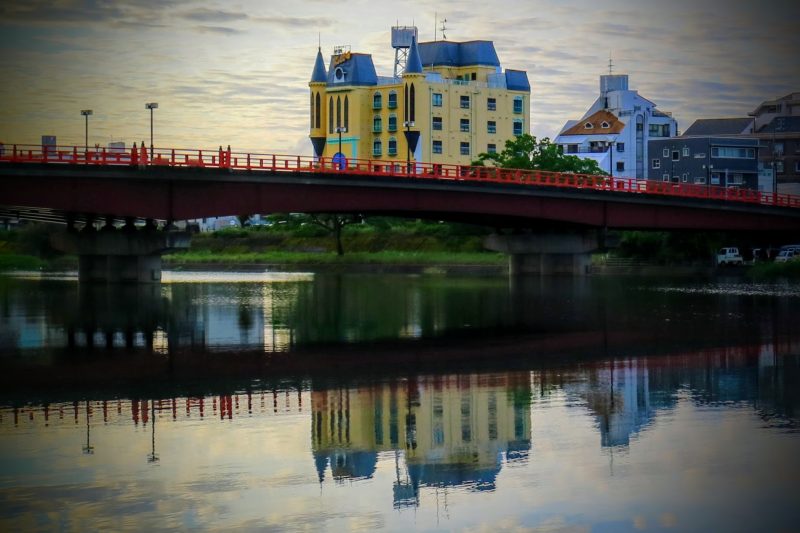 The spires of the Espo World (Love) Hotel (エスポワールホテルベル) at dawn, across the river from historic Tojinmachi in Kochi, Japan. Photo by Nevin Thompson.

A recent survey has ranked the top ten strangest “love hotel” names in Japan. Coming out on top? “Banana & Donut.”

“Banana & Donut” is the perfect name for a love hotel.

“Banana & Donut,” which as recently as 2013 was ranked as having only the tenth-weirdest name, is a “love hotel” (known as a ラブホ, or rabuho in Japanese) in Saga Prefecture in western Japan. Visitors to such hotels pay per hour or for an overnight stay, typically for a private place to have sex. Some tourists to Japan have discovered, however, that “love hotels” are an affordable alternative to conventional hotels.

“Love hotels”, with their by-the-hour rates, serve a variety of purposes. In a culture where it's uncommon to entertain guests at home, the hotels provide a neutral space for intimate encounters when dating; in a country where most houses lack insulation or central heating, they are a warm refuge in winter. There's also the idea that these hotels provide a convenient place to retire for an illicit tryst — and most of them provide guests with private parking spots, or at least some way of obscuring the car's license plate number from prying eyes.

Since “love hotels” all serve a common purpose and market themselves to a similar consumer demographic in generally the same geographic area, they rely on memorable names to stand out from the crowd and help generate business.

Goo Ranking, working with Research Plus, polled 500 Japanese people in December 2016, to come up with some of the strangest (and most memorable) “love hotel” names in the country:

While many of the hotel names seem so whimsical as to be almost incomprehensible, some have a tenuous connection to reality: “The 101st Marriage Proposal” (101回目のプロポーズ), for example, was a television series in 1991, in late bubble-era Japan.

The 101st Marriage Proposal hotel itself is located in the pleasant tourist town of Kurashiki, in western Japan, on Japan's Inland Sea. Images from Google Street View demonstrate the privacy guests can expect when checking in, and the overall romantic atmosphere of the hotel.

Goo Ranking, which gets its name from a little-used search engine and web portal based in Japan, bills itself as Japan's “biggest domestic ranking site”, having published more than 50,000 surveys. The company generally collects its results through Internet surveys, and the results often appear in news reports and other media. The long-running English-language blog, What Japan Thinks, frequently posts translations of its surveys on a variety of topics.