A Year of Living Strategically 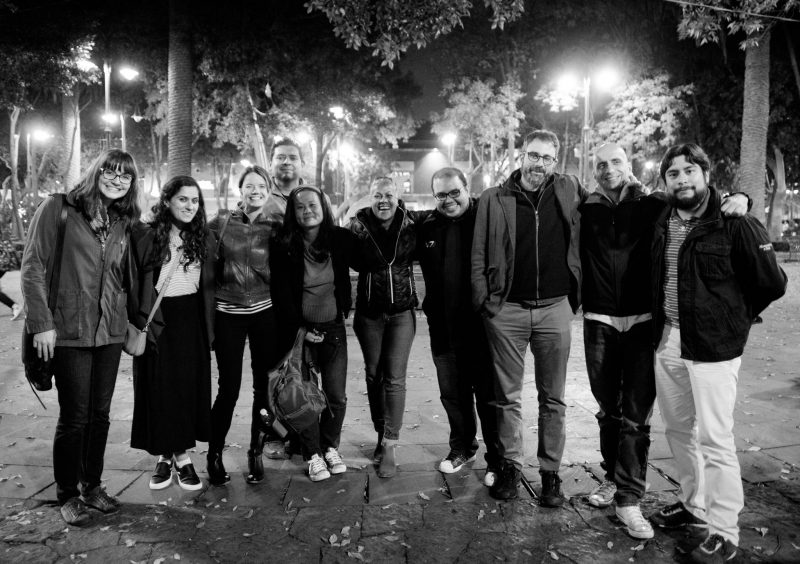 Last month the Global Voices core team met in Mexico City for a four-day retreat. We usually manage to meet once a year, but the last time we were able to get everyone together was January 2015, after the GV Summit in Cebu, Philippines. While we've become quite efficient at working as a virtual team, nothing beats a couple of days of face time to hash out difficult problems, come up with new ideas, and work out plans for projects. 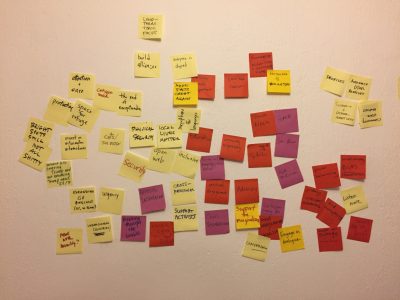 What planning session is complete without a cloud of sticky notes on a wall?

Our Mexico City meeting was especially important for dreaming and strategic planning, as 2017 promises to be a vital year in the future of Global Voices. We face metastasizing threats to the idea of truth in news and information in many countries around the world. This is an accelerating trend that we've been observing and working to combat since our founding over a decade ago. At the same time, online conversations are now predominantly on social media platforms ordered by algorithmic filtering of stories and voices, creating filters for our realities that can feel totalizing. It is disheartening, but not surprising to know, for instance, that the Internet in Myanmar is now mostly on Facebook, and that in many communities the application layer is the only part of the internet that people experience.

Of course, the idea that online space was ever free and open has always been suspect for communities used to comprehensive government filtering and surveillance. This is true where many of us live and work, such as China, Bahrain, or more recently aggressive governments, such as Turkey.

The challenges we faced when we formed as a community remain as large as ever, but their nature has shifted. We have less visibility and perhaps less insight into the digital media companies that mediate of our thoughts. We can see this change in how readers engage with us. For instance, spikes in traffic on Global Voices used to be driven by events in real life. When an earthquake hit China’s Sichuan Province in 2008, we knew that interest in our stories was connected to the in-person documentation that Chinese citizens were sharing online, and that we were translating and analyzing. In 2011 our growth in traffic was directly connected to our reporting on the Arab uprisings and the Japanese earthquake and tsunami, and throughout that time we could see periodic spikes in traffic tied to world events – natural disasters, political uprisings and transitions, protests and conflicts.

Over the past few years, however, we've seen a shift in attention and engagement. Now traffic spikes will also accord with online phenomena that are disconnected or heavily mediated by online phenomena. They are attention events rather than actual events – driven and influenced by algorithms. An example is the effect of an inflammatory Donald Trump Tweet, which is given more time and attention by media outlets than other, more important issues that might be occurring at the same time. These key occurrences may not penetrate the consciousness of many publics because stories about them do not receive the algorithmic love given to more facile, sensational reporting, either intentionally or by chance.

We at Global Voices have never found the cyber-skeptic v. cyber-utopian debate to be interesting or helpful. We focus first on the often messy arena of human interaction and discourse, and recognize that technologies are tools designed and built with affordances that can serve or damage human interests. It is, of course, difficult to predict the moral effects of most technologies. While it is possible to design technologies on the basis of principles such as openness, bridging, or empathy, that intent, of course, is never sufficient in itself to guarantee benefit to individuals, communities or publics. The simple reason for this is that we do not all agree on which values should underpin our societies.

That said, we are acutely aware that values aligned with markets and governmental control increasingly dominate the internet and mobile networks. Some believe those values to be drivers of human progress; the interests of markets and governments are not necessarily the same. However, their interests are intertwined in the desire to understand, catalogue and order human activities, with the result that much of our online lives are continuously surveilled and monitored, by social media companies, by third-party applications and advertisers, and by government agencies. Governments in too many countries are aware of and seek to control online discourse, in an effort to manage, control and govern their populations, whether as part of a strategy of managed authoritarianism, or to keep track of populations they mistrust. They too often see the whole idea of citizen media – of the digital layer of conversation that accompanies and augments our lives – as a threat to order, and as a threat to the many levers of power controlled by governments, ruling oligarchies, regimes or ethnic, sectarian, or economic majorities.

As a consequence, it is now more challenging, more risky, and sometimes simply dangerous to produce the kinds of stories we do. Global Voices contributors in Bangladesh, Ethiopia, Syria, Bahrain, Macedonia, Morocco, Venezuela, Cuba, and numerous other countries faced personal threats in 2016. In some cases those individuals have chosen to stop writing or contributing to Global Voices and other online platforms out of fear for their safety. Others have chosen to self-censor, or in some cases, to relocate to other countries.

We expect these kinds of threats to continue in the future. We have no illusions that the range of tactics available to suppress speech in too many countries is varied and effective—from campaigns of disinformation that distort and confuse, such as the current hysteria over fake news; to threats to systems such as DDOS attacks; to more direct forms of pressure such as doxing, hacking, and theft of personal information; to repressive laws used to silence or imprison, to physical violence and killing.

Entering and participating in the increasingly adversarial, hostile arena of public speech now feels daunting, even threatening for many. And we know that even those who attack could themselves become targets in the next round of viciousness. The Chinese model of the human flesh search engine is available to us all, and the idea of the mob is shifting once again, back to the more atavistic definition employed in the 19th and 20th centuries, to describe our darker, more violent selves subsumed within group dynamics. In this context, communities of support and practice that advocate for principles and norms for online speech feel more vital than ever.

That thought takes me back to our conversations in Mexico City. We spent a great deal of time talking about language—about words that might capture the essence of Global Voices’ reason for being. After many attempts, we came up with a simple, forceful draft statement of principle that is, I hope, the starting point for any strategy, and maybe in some way, is a strategy in itself. It goes like this:

We acknowledge and celebrate that individual attention and human connection are central to building bridges across countries and languages, regardless of origin, standing, or access to power.