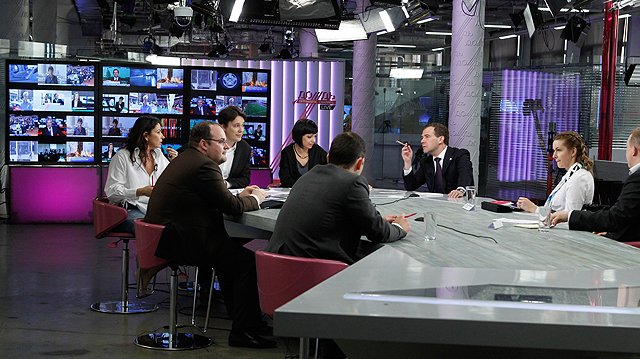 On Thursday, Ukraine's National Council on Television and Radio Broadcasting voted unanimously to remove Russian independent TV station Dozhd from its list of approved foreign broadcasters, giving television providers one month to remove the station from their networks.

According to a press release posted on the council's website, the decision to ban Dozhd, the last remaining Russian TV station licensed to be broadcast in Ukraine, was made after the channel aired two films on December 31, “Faster than Rabbits” and “What Else Do Men Talk About?”, which popularized “the law enforcement agencies of the aggressor-state [Russia].”

Sergei Kostnitsny, a member of the National Council, said that Dozhd's depictions of Crimea as a Russian republic had spurred the decision, but that the station had also violated Ukrainian advertising laws throughout 2016.

We recorded repeated violations of Ukrainian law by “Dozhd” throughout 2016. They aired Russian advertisements. We approached the television with a request to stop violating the law prohibiting this. They promised to stop doing so and to air a version of “Dozhd” without advertisements within two months. But such a version never made it to the National Council.

Dozhd's General Director Nataliya Sindeeva, however, told The Moscow Times that Ukrainian authorities had given her station no such warning.

Since the Russian annexation of Crimea in the spring of 2014, the Ukrainian government has banned not only Russian news stations, but also Russian channels broadcasting sports, movies, and entertainment shows. In addition to being the last Russian-operated TV channel in Ukraine, Dozhd airs some of the only Russian-language programming; there is no exclusively Russian-language TV station in Ukraine, despite the fact that less than 60 percent of Ukrainians say they prefer to use Ukrainian in their everyday communication.

The decision to ban Dozhd came as a surprise to many in part because the station reached such a small number of viewers: after hearing the news, Dozhd's Editor-In-Chief, Roman Badanin, revealed that only 500,000 households in Ukraine have access to the channel.

As Facebook user Evgeniy Chursin wrote, “Logic. Ban the Russian TV station Dozhd, which no one in Ukraine ever watched.” 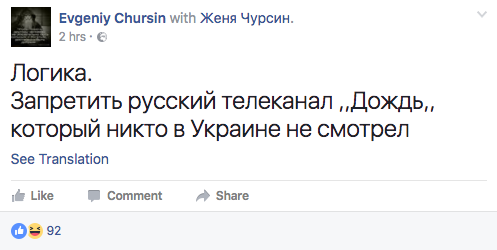 Still, the station has a strong online presence, and Badanin has said that he hopes subscribers will continue to be able to watch all of its programming at tvrain.ru.

The ban is also surprising because many of the channel's presenters actively supported the 2014 EuroMaidan Revolution—which brought the current government in Kyiv to power. What's more, Dozhd broadcasters have been highly critical of both the Russian annexation of Crimea and the Kremlin's support for separatist movements in eastern Ukraine—something few other Russian media outlets have done.

And the affection, until recently, seemed to be mutual. When Dozhd came under fire from Russian regulators in February 2014, for publishing a poll that asked readers whether it would have saved hundreds of thousands of lives if the Soviets had given up Leningrad to the Nazis during the Second World War, Ukrainian protesters marched through Kyiv carrying umbrellas in support of the channel (Dozhd means “rain” in Russian).

The Kremlin, despite having pressured Dozhd for years to curtail its criticism of the Russian government, has used the ban as an opportunity to condemn Ukraine's leadership. Kremlin spokesman Dmitry Peskov reacted to the news, saying that “The destructive approach of the Ukrainian side continues.” Maria Zakharova, the spokeswoman for the Russian foreign ministry, wrote on Facebook that while she hoped Ukrainian censors would not follow through with their decision, the Russian government would have no choice but to report the ban to the Organization for Security and Cooperation in Europe (OSCE) if they do.

Russians and Ukrainians alike called attention to the Kremlin's hypocrisy. Vitaliy Kaschirniy, whose Twitter biography identifies him as a member of Ukraine's “Information Troops,” a project of Ukraine's Ministry of Information Policy, posted screenshots of news articles detailing the Kremlin's attempts to crack down on Dozhd at home alongside a headline about Peskov's statement.

A tutorial on double standards for these scoundrels. They've perfected the method!

The Kremlin's position: Russians must never watch the Russian TV channel “Dozhd,” but Ukrainians absolutely must.

Thanks to the ban in Ukraine, Dozhd has received a second wind. Officials are suddenly remembering the forgotten “freedom of speech.”

But in this case, hypocrisy cuts both ways: Dozhd was able to dig up a video of Ukrainian President Petro Poroshenko endorsing the channel earlier in his presidency. He told reporters that “Anyone who doesn't comply with the law will be held responsible. This is also my function as the guarantor of the constitution. Watch Dozhd, don't watch any other Russian channels.”

Although some Ukrainians opposed the ban, many quickly came to their government's defense, questioning Dozhd's status as an opposition outlet in Russia.

@KevinRothrock If this channel is broadcast in Russia, then he is not a anti-Kremlin. Am I right??