Image from the online petition created by environmentalist Anna Oposa

The children's entertainment company Nickelodeon wants to build a theme park in Palawan, the Philippines’ last ecological frontier. Local environmentalists are not amused.

Around the world, Nickelodeon is known for producing popular television shows like SpongeBob SquarePants, Teenage Mutant Ninja Turtles, and Dora the Explorer. The network's parent company, the media giant Viacom, announced its plans for Palawan on Monday, Jan. 9. Viacom says it's partnering with Coral World Park Undersea Resorts to build [2] the park and an accompanying resort.

Dubbed the world’s first undersea attraction, the project features a 400-hectare (988-acre) resort located within a cluster of 16 white sand islands in Coron, Palawan. Coron, a popular tourist destination known for its white sand beaches, hidden lagoons, and pristine coral reefs, is part of Palawan province and home to various endangered species, which are threatened by unregulated commercial extractive activities.

After plans for the resort and theme park were announced, environmentalist Anna Oposa launched [1] an online petition against the development plans. At the time of this writing, less than two days after the petition went live, there are more than 189,000 signatures.

Contrary to the press statement that the underwater theme park would “advocate ocean protection,” it will accomplish the exact opposite. By building artificial structures, you will undeniably damage and disrupt Palawan's marine ecosystems — our Last Frontier.

For a channel that targets children, Nickelodeon is setting a terrible example to the younger generation by taking away their right to enjoy our natural resources. We don't need an underwater theme park — our underwater life is fascinating, entertaining, and educational on its own. 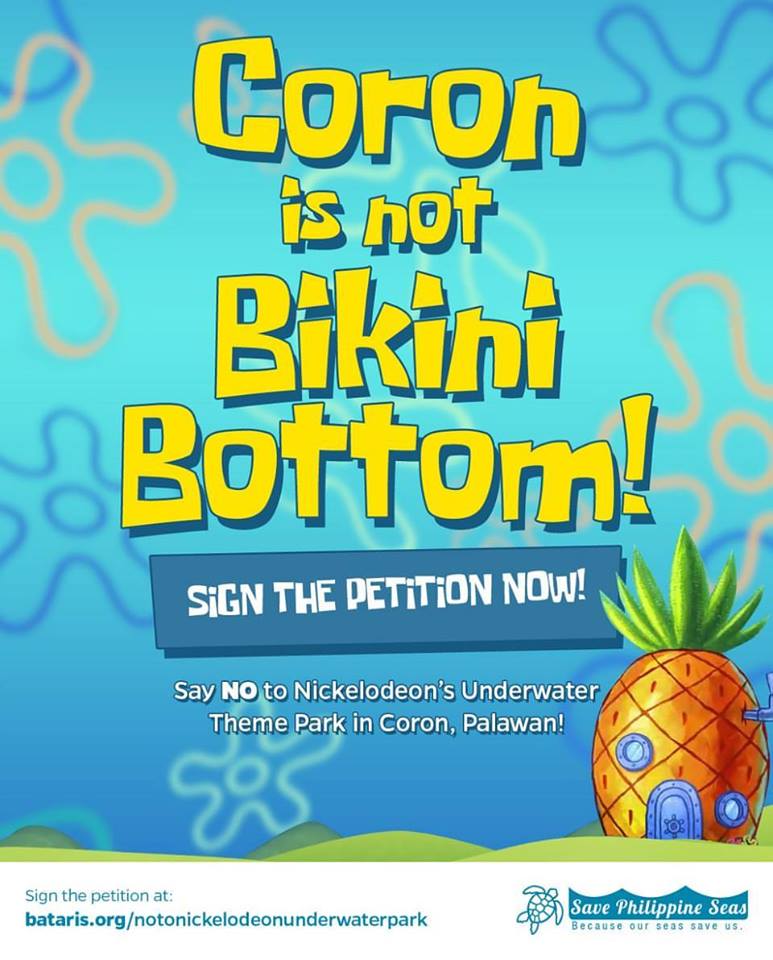 Coron is a popular tourism destination known for its white sand beaches and hidden lagoons. Photo from the Facebook page of Save Philippine Seas

Developers have responded to criticism by saying that the theme park is actually land-based, featuring only a floating [4] infrastructure. This contradicts a press statement [5] from Viacom, however, where the company described “underwater restaurants and lounges, which will be located about 20 feet below sea level with vivid views of the world beneath the ocean.”

The “Save Philippine Seas” network has dismissed [6] developers’ efforts to walk back Viacom's description:

Their statements attempt to downplay the possible irreversible environmental impacts of the proposed project to the marine environment, violating the constitutional rights of the community to a healthy and balanced ecology. Though they claim to build on private property, the Philippines’ waters cannot be privatized. Their statements also make no recognition of or respect to the rights of the indigenous peoples of Calamianes.

The environmental group is urging the resort developer to invest its funds in the support of existing marine protected areas:

…we still stand by our position for them not to proceed with their project and to re-channel their budget to support existing marine protected areas and sustainable livelihood programs for communities. 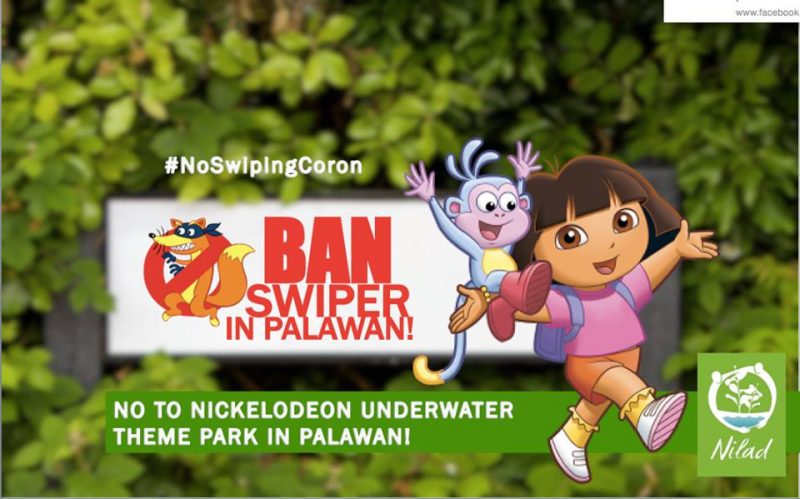 The government’s environment secretary, meanwhile, says she will oppose the construction of any underwater theme parks in Palawan: