‘The Richest Political Party in Europe’ Gets Its Wealth From Corruption, According to Macedonian Journalists 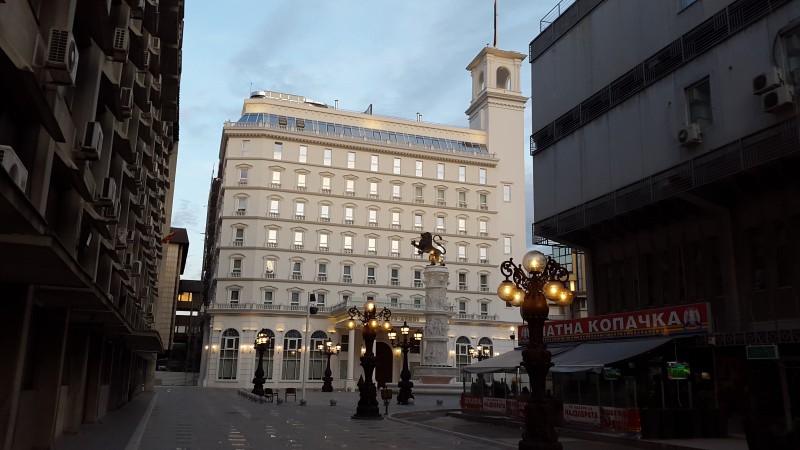 Investigative journalists in Macedonia say the country's ruling party VMRO-DPMNE owns properties that by law it shouldn't, and that party officials in government positions have abused their power to benefit the party.

The Center for Investigative Journalism SCOOP earlier revealed that Macedonia's main ruling party VMRO-DPMNE is possibly the richest in Europe thanks to a vast portfolio of officially owned real-estate, with an estimated market value of around 60 million euros (66 million US dollars). Now, SCOOP teamed up with another independent outlet called Nova TV and produced a short documentary about the sources of the party's wealth.

The eight-minute documentary had been published online in Macedonian with English subtitles, making it available to wider audiences.

The documentary states that in addition to its luxurious eight-story headquarters in the center of Skopje, the party owns pastures and apartments. Macedonian law prohibits real-estate ownership by political parties, with the exception of office space. For some of its 15 agricultural properties, VMRO-DPMNE shares the ownership with private individuals and the state.

According to Article 6 from the Law on Financing of Political Parties, they “have the right to ownership of office space, equipment, office supplies, vehicles, and other movable property necessary for achieving their objectives and performing the activities determined by the party statute and the law.” If the parties receive any other kind of property as a gift, they must promptly sell it via court-administered auction.

The journalists’ research found that many of these properties were acquired after 2011, and most of them during 2014. VMRO-DPMNE had been continuously in power in Macedonia since 2006.

Where does the money come from? 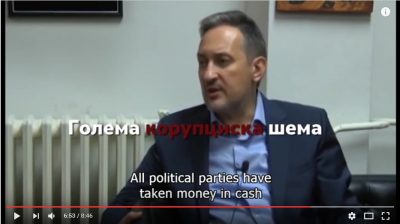 Ex-Prime Minister Georgievski quoted in the video saying it's a “large corruption scheme” (голема корупциска шема). This sentence is not translated in the subtitles.

The documentary quotes former VMRO-DPMNE President (1990-2003) and former Prime Minister (1998-2002) Ljubčo Georgievski who openly admits that the source is a “large corruption scheme” (although his quote, “Toa e edna golema korupciska shema,” is not translated into English in the subtitles). He alleged that all parties have been receiving cash. However, no other party owns so much wealth, and no other party owns properties forbidden by law with full impunity.

Leaked wiretaps published by the opposition in 2015, containing hundreds of conversations among government officials, journalists, foreign diplomats and human rights defenders that were secretly recorded reportedly on the order of prime minister, offer an indication of what he means by “cash.”

For instance, in one of the leaked conversations, VMRO-DPMNE party boss Nikola Gruevski talks to then-member of parliament Silvana Boneva who complains to him that his underlings had done too much racketeering ahead of elections. The following video provides a subtitled excerpt in which Gruevski explains that it's only blackmail if one threatens to close down the business — otherwise it's a simple “donation” to the party. Boneva later became a member of the State Election Commission.

From a modest house to a palace

After its establishment in the early 1990s, VMRO-DPMNE was headquartered in a modest three-story yellow house in the center of Skopje. The new headquarters, named Palace “Dr. Hristo Tatarchev” after a historic revolutionary, covers that original plot of land of 200 square meters, plus much of the surrounding area. The new HQ occupies 1,200 square meters in total.

A separate investigative project, Prizma, revealed that in 2009, at the time that the party held power at local level in the municipality of Centar, local officials changed the zoning laws to allow a towering structure. Party-appointed officials in the Ministry of Transport and Communications sold the surrounding state-owned land to the party.

In order to ensure that the process would be completed and kept under wraps by local officials, the party allegedly attempted to rig the 2013 local elections, as heard in a leaked wiretap about the municipality of Centar.

In the beginning of December 2016, several photographs surfaced, providing a peek of the inside of the VMRO-DPMNE party headquarters and fueling the speculation about its opulent interior in baroque, neo-classicist and socialist realism style.

EXCLUSIVE:
Foreign Secret Services in the luxurious castle of VMRO-DPMNE, the richest party with poorest voters in Europe.

During the parliamentary election night of December 11, 2016, journalists were allowed to enter the party headquarters for the first time for a press conference. One of them, Vlado Apostolov, tweeted some photos from the room, which seemingly confirmed that some of the leaked photos indeed showed the building's interior.

At this point, VMRO-DPMNE still runs the government of the Republic of Macedonia. Having won the most votes during the elections, its chief and former prime minister Nikola Gruevski received a mandate from the president to try to form a new government. It's uncertain whether they will manage to bring together a majority coalition. If they fail, the mandate will go to the biggest opposition party, SDSM (Social Democratic Union of Macedonia).