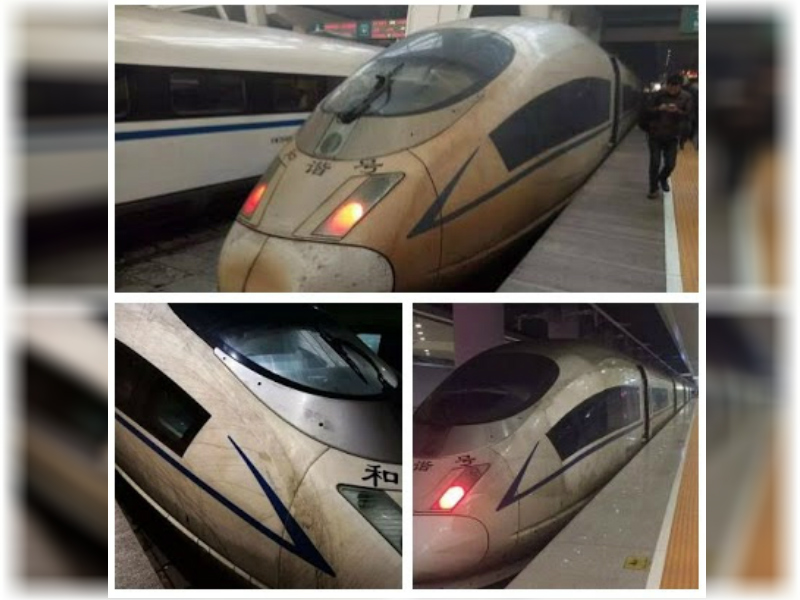 High-speed train from Shanghai to Beijing covered with dirt from smog. Collage from Weibo.

China welcomed 2017 with a thick, lasting smog, souring many people's mood for the new year. Public discontent over the severe pollution hanging over northern China for nearly two weeks has been building, and the lack of solution has led some to question the efficacy of the Chinese Communist Party’s rule on social media.

A particularly shocking illustration of just how bad the situation is came in the form of photographs showing high-speed trains in Beijing covered in a thick layer of grime after passing through the severe smog areas. The shots went viral and spurred hot discussion on popular Chinese platform Weibo. A selection of comments in reaction to the photos are below:

I don't think I will live as long as 80. Look at the train and see what happens to our lungs. My grandpa, aunt and uncle all have lung cancer.

This is so terrible. [Grime on the train can be washed away] but we can't wash our lungs.

Thanks to the party and the government, smog is very nutritious with vitamins ABCDEFG.

Some domestic media outlets picked up the story and confirmed that the photos were taken on January 2 after a high-speed train traveled through Shanghai to Beijing. The railway authority also responded to the news report stating that it is not unusual to see trains covered in dirt when air quality is low.

Air pollution readings in northern Chinese cities have been many times above the World Health Organization-designated safe level of 25 micrograms per cubic meter of PM 2.5 pollutant, and the year 2017 began with red alerts in 24 cities where the levels of PM 2.5 have been above 300 for more than 72 hours.

A post from well-known Chinese film director Lu Chuan, which quotes a doctor’s remarks on the potential harmful effects of smog, has been forwarded over a thousand times:

[…] We Chinese people generally lack knowledge of smog and seldom take precautions, such as wearing anti-smog masks, hats, scarfs and gloves […] Smog inhaled into the body and lungs will never be released and end up hurting our health. Generally, people will start to get sick a decade or two later (lung cancer, emphysema, tracheal diseases, asthma……, those who are weaker could suffer lung cancer quickly). The doctor says whenever she sees adults bringing children outdoors, her heart hurts. As children's tracheae are shorter, they inhale more smog than adults……

Zhong Nanshan, a prominent academic, has warned that smog could cause severe diseases including cancer. Nonprofit group Berkeley Earth in California has estimated that smog has led to 1.6 million premature deaths per year in China.

Yet many comments online have labeled criticism of the smog as anti-China. Even Wang Zhanyang, a professor at the Chinese Communist Party’s subsidiary Central Socialist College, could not bear to see such extreme patriotism and voiced out against the political labeling on Weibo:

Smog and political correctness: Some people argue that when facing severe smog, we can’t disclose, can’t criticize, can’t complain, can’t expose the root causes, otherwise you are anti-China, traitors and collaborators. Is it politically correct that people should breathe in smog without making any complaints, and even defend it? If political correctness is against human nature and humanity […] can that be correct? Moreover, [the party line] states that we have to address public discontent, but now you label public discontent with such a political accusation, what's the intention behind this? 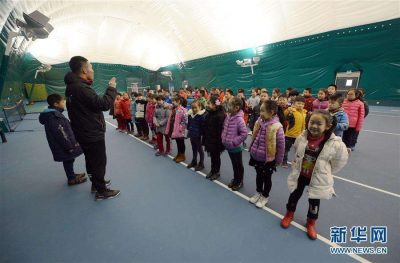 Meanwhile, state media continues to highlight efforts in dealing with smog. People's Daily reported that a primary school in Shijiazhuang, one of the most polluted cities in Hebei province, held physical education class for students in a huge inflatable building filled with purified air. The school's measure has attracted both positive comments and mockery:

Should we feel happy or sad about this?

In the future, humans will be like vegetables, growing up under a canopy…

So, you are happy?

Despite the thick smog, many Chinese still chose to gather in Tiananmen Square early on New Year's Day to watch the raising national flag:

As the world's biggest carbon emitter, China depends on coal for more than 60 percent of its electricity. The government has announced its intention to reduce hazardous emissions from coal-fired power plants by 60 percent over the next five years, but its overall emissions will peak by about 2030 before starting to decline during the Paris Climate deal in 2015.