How Many Cows Does It Take To Get A University Degree? 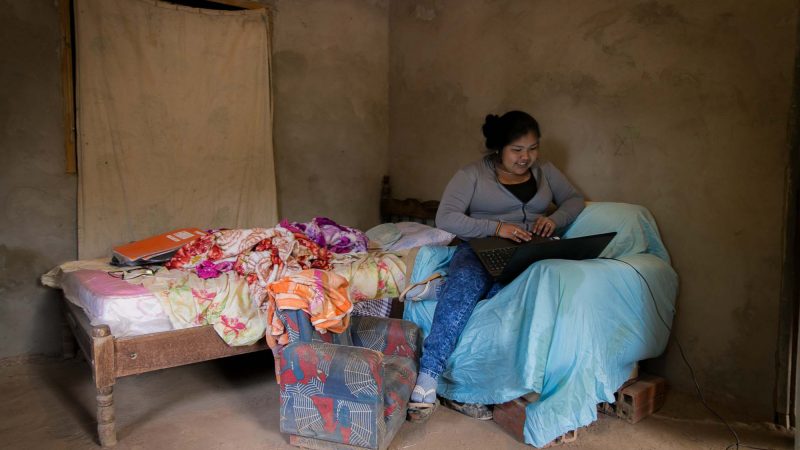 Below is a condensed version of a report written by Fátima Rodriguez for Kurtural and republished on Global Voices with permission. The article is part of the series “Cows That Fly, Schools That Crumble,” which will be edited and republished on Global Voices Latin America. The original version includes longer testimonials about life in indigenous towns of the area and also includes an in depth historical background of the diverse communities in the area of Paraguay where Cayin ô Clim can be found.

Eudelio Franco finished high school the same year that Paraguay sent cows to Ecuador by plane. In 2015, she was the first woman to graduate from high school in the urban indigenous community of Cayin ô Clim or White Hummingbird in the Nivaclé language, in the Paraguayan Chaco, but she doesn't know if she will finish university. It all depends on the decision of the community about whether or not to sell the communally owned cows to help her pay for school.

Eudelia returns to Cayin ô Clim one cold morning in July after four months of studying Business Administration at the Autonomous University of Asunción, one of the 54 private universities that exist in the country. The community was founded by a religious mission in 1954 on the outskirts of the Mennonite city of Neuland in the north east of the country.

After a seven hour trip from the capital, Eudelia is received in Neuland by Juan Franco, her father. Starting at 3 a.m. he prepares the dough for the German bakery where he works. His salary is 2,000,000 guaraníes (about $360 a month), little more than the legal minimum wage which isn´t enough to cover his daughter´s expenses in Asunción.

Eudelia lives in Asunción, in a small apartment furnished with a borrowed mattress and chairs. From home, she brought a pot, a spoon and an electric stove that she borrowed from her aunt. Since February 2016 she has learned many things while living in the capital: how to take the bus, how to make full sentences in Spanish, street names and how to spend entire days without eating.

On Thursday, she knows she has a meal secured. Noelia, a classmate from her Thursday course, normally invites her to eat during the break. Other days, her classmate Diego gives her some food. Sometimes, for weeks on end, she only eats what is given to her by her classmates.

When she finished high school, many people from the community celebrated and congratulated her. She remembers how the community radio station dedicated music to her and recorded special greetings. On graduation day, there was a party with dancing and food. There were 12 graduates, only one of them was indigenous: Eudelia.

Return to the Community

Nélida Sandoval remembers her daughter when she was a chubby, smiling girl, going to school by bicycle with her sister. Having enough time to study and to do homework meant they could no longer do housework, like going to the mountain to look for firewood.

Eudelia passes by the medical center, the soccer field, the school, the radio station. She needs to take advantage of her time because she will only be in the town for 3 days. As she is walking, she says hi to her friend Sunny Lady, who almost cries when she sees Eudelia. They touch hands. The nivachei, women of the community in the Nivaclé language, are not much used to hugging. Eudelia and Sunny Lady say hi: “Lhom!”. “Hello!”.

Sunny Lady López is 21 years old. She shows affection for her friend but she takes any opportunity to point out that Eudelia is privileged because her dad is a baker and because he keeps quiet. Sunny López's father works in communication and is used to being an outspoken defender of indigenous rights. She also dreamed of going to university.

In the beginning of 2015, Sunny López posted on Facebook that the teachers at her high school discriminated against indigenous students. According to her, it was necessary for them to make reservations to use something from the library or the computers but it wasn't necessary for the other students to do the same. This criticism almost got her expelled from school. An NGO stepped in and managed to get the high school to take Sunny back, but afterwards it wasn't the same.

“They never let me speak again,” recalls Sunny López. During the high school Olympics, they told her that it would be better if she stayed quiet. They asked her, sarcastically, if she was the secretary of all indigenous people. Months later, due to a lack of money, she dropped out of high school.

“Eudelia´s situation is different, her dad is a baker, he has a secure job,” she says.

There are no Mennonites that go to the Nuevo Amanecer high school, and latino children don't go to the Mennonite schools because of the high cost and demanding requirements. For example, Jorgelina, Eudelia's best friend from high school, is Paraguayan and daughter of two latino parents who moved to Neuland from Asunción. There were a number of indigenous classmates in her grade at the beginning of the year, but all of the dropped out because they had to work, because it was too expensive or because the girls got pregnant.

The land of the Nivaclé of Cayin ô Clim

The 28 hectares where Cayin ô Clim was initially settled, was too small for the children and grandchildren of the first settlers. As a result, the Mennonite settlers helped them to found other communities a little farther from the city, like Campo Alegre, Nicha Toyish and Paraíso.

Almost everybody living in Cayin ô Clim is an employee or a day worker for Mennonite businesses, but when it was no longer possible to economically sustain the new communities, the state committed itself to buying new land where they could raise cows and remedy the situation. This is the land where the indigenous community built the ranch.

The first cows were donated by the Mennonite cooperative. Today, they have 386 head of cattle that allow them to raise and sell weaned calves – calves ready for the fattening process – which helps pay any fees for the community truck and pay for any emergencies. Every weaned calf is sold for anywhere between 1,400,000 to 1,800,000 guaraníes ($250-330). There are also 145 goats, chickens and other domestic animals on the ranch.

The community is in danger of losing the ranch. This year, the government handed over deeds to the land acquired in 1997 by the Paraguayan Indigenous Institute (INDI). In those days, the state paid almost 3 billion guaraníes ($540,000) for 19,000 hectares from landowner, Gregorio Presentado Benegas. But an ex-military member, Humberto Peralta, and a rancher, Ramón Esteche, appeared and claimed that they had deeds to the same land. An expert from the Supreme Court needs to evaluate the validity of the documents and who “invested in the property”. For this reason, the indigenous group was obligated to take out a loan to clean the land and plant grass. According to their logic, the courts will have no doubt that the land belongs to the community, since they invested in the property.

How many cows is a university degree worth?

Supposing that the weaned calves are sold at the best price and the university fees don't go up – as they tend to do in private universities- nor the price of rent, Eudelia would need 58 cows to finish her Administration degree in 4 years. Supposing that everything goes well in her Written and Oral Communication class, her most difficult course so far.

Eudelia returns to Asunción with promises from her community that they will help, but nothing so concrete. The sale of the cows could be the solution, but only as a last resort. Even with all the aide that the government could give her, she is in the red. INDI requires the presence of a community leader in Asunción to corroborate that she is a member of an indigenous community. The trip costs more than a month of benefits: 350 thousand guaraníes.

In the meantime, she is looking for a job as a cleaner.