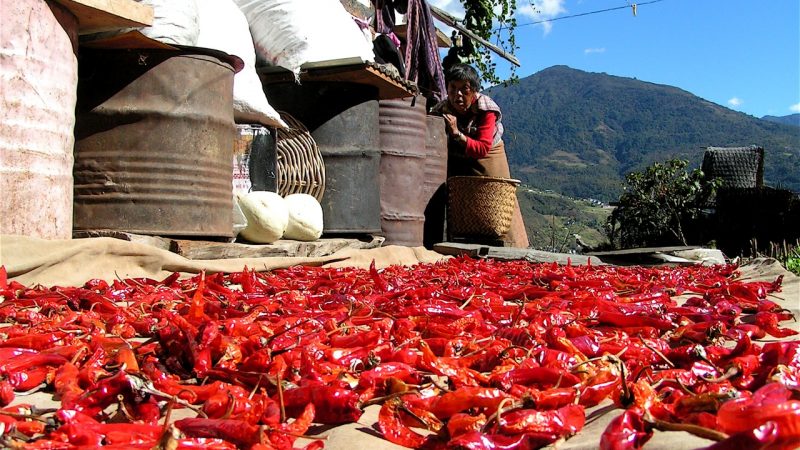 In Bhutan, chilies are highly regarded as a vegetable rather than a mere spice. The national dish is Ema Datshi, a curry made from hot chili pepper and cheese. It's no mystery why Bhutan has made chilies an important part of its cuisine: the place is cold, and spicy food is a delicious way to warm up. Recently, however, a controversial import ban has skyrocketed prices on this staple food.

In Bhutan, a landlocked country in the Himalayas, chilies are considered something transcendent — they're a way of life. Writing online, Kinley Tshering describes this powerful obsession:

It is hard to imagine Bhutanese dish without chillies. Bhutanese eat chillies whether raw or cooked, minced or roasted, fresh or dried, but no Bhutanese dish is complete without it. It isn't just another vegetable – or fruit if you want to get real scientific – we eat everyday; it is an integral part of our culture and life.

Ema Datshi – the national dish of #Bhutan made with potatoes, chili & cheese, eaten with rice. It's #ComfortFood pic.twitter.com/zW6llG260c

For this very reason, sourcing of chilies is very important. Chilies do not grow everywhere in Bhutan, mainly because of the country's climate. As a landlocked country, Bhutan depends on regular imports from its neighbor, India, which supplies the particularly small and spicy varieties that are hard to cultivate in Bhutan.

In July 2016, the Bhutan Agriculture and Food Regulatory Authority slapped a temporary ban on the import of chillies from India, claiming that pesticides were found in some imported shipments from India. Bhutan regulates the use of pesticide as it plans to become a 100-percent organic-produce country by 2020.

This is good chance for Bhutanese farmer to produce more chili and do marketing.

One unwelcome side effect of the new regulations, unfortunately, has been rising prices nationwide on smaller and spicier fresh green chilies. A slump in domestic production due to a heavy monsoon season has only aggravated the market. By this winter, chili prices were twice as high as they were before the ban. The timing is lousy, too: two-thirds of Bhutan's imported chilis — nearly 2.3 metric tons — are sold in the winter.

Ema Datsi, the national dish will just be a distant dream, if the price goes even higher.

Facebook user Desup Nim Dorji, meanwhile, shared a video describing some of the problems with vegetables imported from India, writing:

There has been wide spread of anger and frustration on the price of Chilli. I just wonder why people are not educated enough to look at other side of imported Chilli we have consumed.

In an effort to normalize the situation, the Bhutanese government started importing pesticide-free chillies from India.

Inside Bhutan, a guide on Bhutan, wrote on Facebook:

Importing CHILI via Chartered Flight is NOTHING but the failure of Ministry of Agriculture (and Forestry)!

The well trained agriculturist and extension officers (in Gewogs) should have collaborated with farmers and cultivated ‘winter chili’ rather than watching Bhutan import emergency chili via air. This was a good chance to encourage winter farming and promote organic farming in Bhutan.

The question is: given this humongous captive market, why isn't the Bhutanese people growing more chilies?